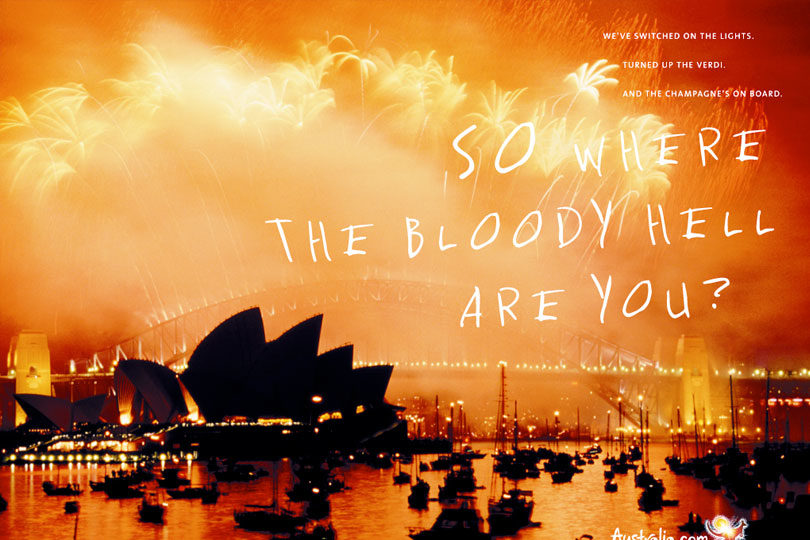 From the Wall Street Journal:

How do you advertise a country?

As more nations around the world market their charms to the globe-trotting tourist, their international ad campaigns sound surprisingly, and blandly, similar. But amid invitations to visit destinations that are exotic, unique and incredible comes a curveball from Down Under: “So Where the Bloody Hell Are You?”

Australia’s Tourism Ministry plans to spend the equivalent of $135 million over the next 2½ years promoting the fresh tagline, in commercials set to start airing next week on major U.S. television networks. The slogan’s introduction in Australia and New Zealand has already elicited strong opinions, with critics calling it a profane turnoff.

The brash motto’s advocates say they are targeting educated, adventurous tourists who get that the line is a play on the widely held view of Australians as friendly and unpretentious. Tourism Australia, the national agency responsible for the promotion, has tested the line on 47,000 people in seven countries and says the response has been overwhelmingly positive. Even Australian Prime Minister John Howard has weighed in, declaring the slogan very effective and “anything but offensive.”

Suggestive or in-your-face slogans have broken out before: amid all the “Incredible India”s and “I New York”s, the most memorable such messages are often of this ilk. Las Vegas has “What Happens in Vegas, Stays in Vegas”; years ago, “Virginia is for Lovers” was racy for its time.

Backers of Australia’s slogan reckon it could give Australia’s tourism industry its biggest lift since actor Paul Hogan, a.k.a. Crocodile Dundee, offered to throw another shrimp on the barbie for visitors back in a 1984 campaign. Still, Tourism Australia has had to tone down its new message in at least two markets. Advertising regulators in Britain, where the campaign will roll out next week, have banned the word “bloody” from the television ads there — a decision Australian Tourism Minister Fran Bailey described yesterday as “comical,” because the original ad will appear uncut in British cinemas, in newspapers and online. The edgy TV ads won’t air in prudish Singapore.

The tagline, created by the Sydney office of ad agency M&C Saatchi, underscores the challenge for any tourist destination trying to distinguish itself among scores of rivals targeting the same audience. Asia has proven particularly fertile ground for national tourism campaigns. In addition to “Incredible India,” the region’s slogans include “Uniquely Singapore”; “Malaysia, Truly Asia” and “WOW Philippines!”

“There is nothing that truly stands out,” says Michael Ip, managing director in the Asian-Pacific region for brand consulting firm Landor Associates.

Mr. Ip also questions the slogans’ credibility. “How many people can actually say getting through Mumbai Airport is an incredible experience?” he says. “And I can’t really say that the traffic in Manila wows me very much. Or that there is anything terribly unique about Singapore.”

Ethnic violence at a Sydney beach suburb in December may have tarnished Australia’s reputation, at least temporarily. Even the best marketing effort can unravel because of political unrest, rampant crime or disease. A grim case in point: the outbreak of severe acute respiratory syndrome that brought Hong Kong’s economy to a virtual standstill in 2003. The deadly SARS virus, which caused fever and respiratory distress, struck after the city had launched a tourism campaign under the slogan, “Hong Kong Will Take Your Breath Away.”

Just as with cars, cereal or any packaged product, the marketing pitch for a country needs a specific target audience, and many efforts have foundered for lack of focus. The Philippines has rebranded itself many times over the past 30 years, with slogans ranging from “Pride of the Orient” to “Fiesta Islands” to “Philippines: The last bargain in Asia.” Its current slogan, “WOW Philippines!,” was intended as much to instill national pride as to attract overseas visitors.

It is all the more impressive, then, when a place gets it right. When tourism officials in India launched their first-ever international promotion, in 2003, they pitched a kaleidoscope of experiences including yoga, wildlife and festivals. Today, with billboards at New York’s Times Square and commercials on CNN, the “Incredible India” campaign is regarded as a great success — in spite of Mr. Ip’s complaint. Its promoters say it contributed to an increase of 25% in foreign tourist arrivals in 2004.

As many as 10 ad agencies have worked on the Indian campaign, but some countries can’t afford outside help. Tourism officials in Bangladesh, inspired by India’s breakthrough, dropped the decades-old tagline “Visit Bangladesh Before the Tourists Come” in 2004. Now they are promoting their latest homemade effort, “Bangladesh — Beautiful Surprise,” with an ad budget of just $71,000. “Until and unless we have an aggressive marketing plan, the slogan doesn’t really matter,” says Mahfuzul Haque, chairman of the Bangladesh Tourism Organization.

High-school students in Uganda helped choose the African country’s first-ever slogan, “Gifted by Nature.” Tourism officials there are trying to rescue a cash-starved ad campaign by outsourcing it to a private consortium.

With countries retooling their messages more frequently, Tourism Australia felt it needed to spice up its own efforts to “cut through the clutter,” a spokesman for the tourism agency says. Its old slogan, “See Australia in a Different Light,” wasn’t doing the trick, so it spent $4.6 million to hire M&C Saatchi to conduct focus groups for six months.

“What we found from a massive research campaign is that people like Australia not so much for Australia but for Australians,” says Tom McFarlane, M&C Saatchi’s regional creative director in Sydney. He settled on the “bloody hell” tagline after considering and tossing out dozens of others, which the agency declined to disclose.

In a TV version of the ad, smiling Australians describe, tongue-in-cheek, their efforts to make visitors feel welcome: “We’ve had the camels shampooed…And we’ve got the sharks out of the pool…We got the ‘roos off the green…” An Aboriginal dancer adds: “And we’ve been rehearsing for over 40,000 years.” A bikini-clad young woman on an otherwise empty beach delivers the saucy tagline.

“What I think this captures is the real Australia and who we really are — an easygoing, welcoming nation,” Mr. McFarlane says. “And people like us for that.”