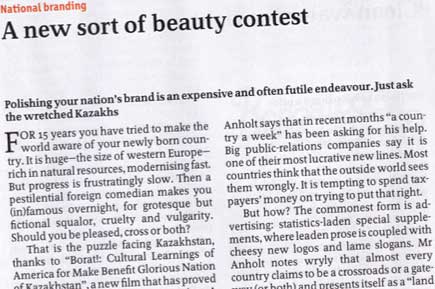 The Economist newspaper has published an article about nation branding, coinciding with the scandal unleashed with Borat and Kazakhstan:

For 15 years you have tried to make the world aware of your newly born country. It is huge—the size of western Europe—rich in natural resources, modernising fast. But progress is frustratingly slow. Then a pestilential foreign comedian makes you (in)famous overnight, for grotesque but fictional squalor, cruelty and vulgarity. Should you be pleased, cross or both?

That is the puzzle facing Kazakhstan, thanks to “Borat!: Cultural Learnings of America for Make Benefit Glorious Nation of Kazakhstan”, a new film that has proved a surprise box-office hit in America. A mock documentary, it portrays Borat, a lecherous, racist Kazakh (but actually a British comedian) visiting America, with assorted misapprehensions on both sides that are comical or tasteless depending on your viewpoint. Kazakh officials are now grimly trying to show they share the joke; Russia says it will ban the “humiliating” film.

Wally Olins, who advises countries on how to market themselves, says Borat is a “disaster” and the Kazakhs should “shut up and wait until it dies down”. Simon Anholt, a specialist in the same field and author of “Competitive Identity”, a book published this week, is more sanguine. The film has brought “raw awareness that they would never have managed otherwise,” he says. But what to do with it?

People with the answer to that kind of question—or those able to pretend that they know—find business is booming. Mr Anholt says that in recent months “a country a week” has been asking for his help. Big public-relations companies say it is one of their most lucrative new lines. Most countries think that the outside world sees them wrongly. It is tempting to spend taxpayers’ money on trying to put that right.

But how? The commonest form is advertising: statistics-laden special supplements, where leaden prose is coupled with cheesy new logos and lame slogans. Mr Anholt notes wryly that almost every country claims to be a crossroads or a gateway (or both) and presents itself as a “land of contrasts”.

But money spent this way can easily be wasted. Mr Olins notes that countries, unlike companies wanting to build brands, find it hard to stick to a strategy, project a clear message, or measure success. Furthermore, most people’s views of foreign countries are deeply rooted and cherished. Unfavourable and comical stereotypes outweigh positive news.

Messages to different audiences may overlap, or conflict. José Torres of Bloom Consulting, which advises Portugal, says that the country’s reputation as a laid-back holiday destination muffles its desired image as a good place for high-tech investment. He speaks lyrically about the process of determining the country’s desired persona. “What clothes would it wear, what car would it drive, what mobile phone would it use?”

If that works at all, it is a long slog. There are two ways a country’s image can change quickly for the better. One is good luck. “Crocodile Dundee”, a witty, virile Australian backwoodsman—an attractive version of Borat—transformed American perceptions of Australia. But such effects are usually partial. “Lord of the Rings”, a fantasy trilogy, showed the spectacular unspoilt scenery of New Zealand, where it was filmed, but has yet to help the food industry there much.

The other is innovation. New products and brands, arts and music, attractive politicians, even better public administration all change people’s perceptions. In business, at least, image-polishing cannot substitute for regular rebukes and bouquets from bodies that systematically scrutinise countries’ reputations, such as Transparency International.

Nor can money spent on glitz and schmooze easily make up for dire political realities, such as a bad record on free speech, or an amnesiac approach to history. But that doesn’t stop governments from trying. Russia is spending lavishly in the hope of boosting its international profile. Projects include trips for foreign journalists and politicians (one particularly cushy one was dubbed the “plane of shame”); another is an English-language television channel that aims to counteract the increasingly critical portrayal of the country abroad. A more successful initiative is an annual winter cultural festival in London’s Trafalgar Square. That has cleverly combined two of the commonest popular perceptions of Russia: harsh winters and historic strength in art and music.

The American administration is also spending heavily on public diplomacy. But apparently to less effect. Polls show unparalleled hostility around the world not just to the administration but to the country itself. “America spent 300 years building a powerful, rich, globally adored brand,” says Mr Anholt. “It is leaking away very  quickly.”