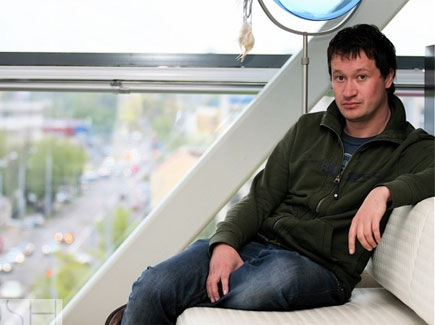 Outside Lithuania, the item generated what editors sometimes call a “brightener” – a short piece guaranteed to raise eyebrows and perhaps a smile or two without eating up much time, space or energy. An antidote to the news, rather than news itself.

Inside Lithuania, the item sparked nothing less than a full round of national soul-searching, punctuated by fits of public ridicule.

No wonder the man behind it all, Paulius Senuta, smiles sheepishly today at all the feathers he has managed to ruffle since the story broke three weeks ago.

A self-described brand consultant and identity developer, all Senuta did was answer his government’s request for big ideas on how Lithuania might plant its name more deeply in the world’s consciousness.

Senuta’s firm, named Not Perfect with intentional irony, responded with a 30-page strategy that counselled out-of-the-box thinking, up to and including the possibility of renaming the box itself. The report hinted that Lithuania, as a brand concept, was ready for retirement.

If you really want to make a splash, try calling it something else.

A 26-member government committee overseeing the rebranding of Lithuania embraced the report, unanimously approving its core strategy. Simultaneously, the overwhelming majority of the Lithuanian media had a field day, mocking the concept from top to bottom.

“The question of core identity – Who are we? Where are we? What do we want to be? – this is dangerous territory that nobody wants to touch because you really get kicked for your ideas,” Senuta told the Star at his firm’s headquarters in Vilnius. “But we took it on. We tried to get a little bit creative, a little bit visionary. We brainstormed 28 different conceptual ideas and we honed them down to just two.”

The strategy the government chose is built around the concept of courage – highlighting a culture that survived the march of armies led by Napoleon, Hitler and Stalin but emphasizing also the culture of experimentation, entrepreneurialism and innovation that exists today as modern Lithuania advances into its post-Soviet future.

It was in the report’s fine print, on what sort of actions the government might take to implement the strategy, that the name-change notion is found.

But The Man Who Would Change Lithuania explains a crucial distinction in all this talk of name-change – the renaming would be for international consumption only. In English.

“For those who speak Lithuanian, there already is no such place as Lithuania – Lietuva is what the country is called inside our borders. That hasn’t changed in a thousand years and we are not suggesting it change now,” said Senuta.

“But outside, we have a problem with our name in English. It is not so bad for native English speakers; they can pronounce it easily enough. But English is today more than ever the international language – and for all the millions of non-native English speakers out there, it can be a struggle to get their tongues around the word Lithuania.”

Many people cannot even find the Baltics on the map, let alone this cool little country of 3.4 million that struggles to differentiate itself from its tiny neighbours, Latvia and Estonia.

Like much of Eastern Europe, Lithuania tends to be grouped into the general category of “high-contrast transitional” countries which seek to attract foreign investment and tourists with campaigns built around the tensions between east and west, old and new, traditional and free-spirited.

Though the Lithuanian government has agreed in principle on a new way to present itself as distinct from its neighbours, the specific measures it will take – including whether or not to fiddle with the name – remain unclear. For Senuta, however, there is little doubt. He puts his vote firmly in favour of the audacity of hype.

“If you want to demonstrate to the world an image of courage and innovation, the last thing you do is simply come up with a slogan and a logo that says, `Lithuania The Brave.’ People will probably suspect the opposite. Instead, you need to show with actions, not with words – action that the whole world will notice.

“Changing the name is one way to have that kind of impact. Not the only way, perhaps. But personally, I think it is a great idea.”