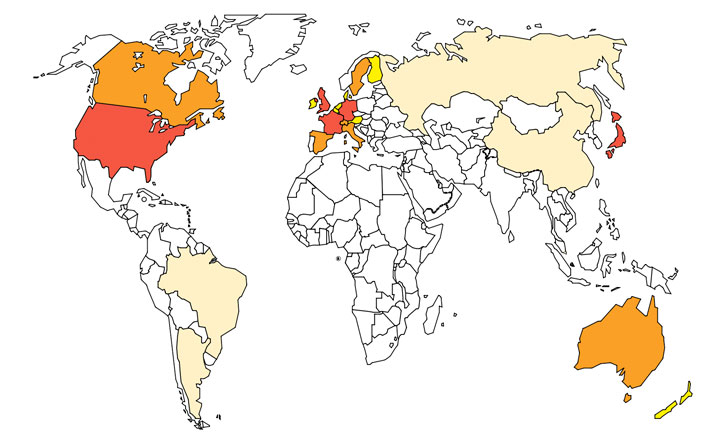 The Nation Brands Index is the most respected tool to measure the power of nation brands, and it shows the abyssal differences in the reputation of countries. The rankings are informative and that’s just perfect but, what happens if we put those rankings upon a map? We get a more visual picture of the more esteemed nations – a world map of nation brands.

In the map, the triumph of the ‘NATO’ country brands  is obvious and self-evident. All of North America and virtually all of Western Europe populate the 20 uppermost spots on the Nation Brands Index as an apparently solid block. But differences between them can be sketched through. There are hints that allow us to make 3 groups out of them.

In red, the top-5 country brands:

These countries are the ones leading the list. They are all big from all perspectives: they have big geograghies, big populations, big economies, big and weighty cultures and big influence. Consequently they have the 5 most powerful country brands.

In dark orange, the following 5:

These countries are quite big, have considerable economies and large populations. They are not as gigantic as the first 5 spots, but are also essentially different from the following 10 country brands.

The “rich’n’small”: Then the ones which sum up to the top-20 nation brands:

These countries are generally smaller, are less populated, but have powerful economies and a high GDP per capita.

Finally, the “big’n’poor”: The following 5 on the list have similar features:

Except for Singapore, these countries are very large and have large economies, but suffer severe problems including poverty, corruption and crime, and have from weak democracies to random conflicts with neighbors. They have ambitions and, except for Argentina (which seems to be stuck and is going nowhere), they are likely to gain weight in the future, probably approaching the “rich and small” group. India should be on this list instead of Singapore to provide more sense to the group, yet the Indian giant, at spot #26, is not that far away.

» DOWNLOAD THE HI-RES VERSION OF THE WORLD MAP OF NATION BRANDS (.Pdf file)