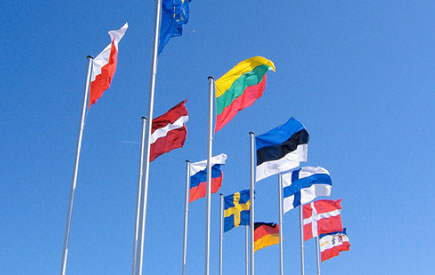 An interesting article on the problems the Branding the Baltic Region effort is encountering:

Brand new thinking on being Baltic

What have Russia, Estonia, Latvia, Lithuania, Germany, Denmark, Poland, Finland and Sweden got in common ?

Anyone who answers “a Baltic coastline” may think they are on the money. But for those behind moves to create a Baltic Sea Regional Brand (BSRB), that simple answer isn’t good enough. There has to be something else – only no one seems quite sure what.

The search for a distinct identity is nothing new as far as the three small Baltic states are concerned. But the Baltic states are not the same as the Baltic Sea Region – which is one of the main misconceptions being wrestled with by experts in their attempts to create the BSRB.

The leader in national brands is UK consultant Simon Anholt, who has been advising several of the region’s governments. “I’ve been working on the notion of Baltic unity and a Baltic brand for some years,” Anholt told bne. “It is problematic. As far as the elite audience is concerned, the Baltic brand is quite positive because it is associated with a very interesting, rapidly developing part of the higher-income world. Speak to any reasonably informed internationalist and they’ll be able to trot out figures about the fast-growing economies. In that respect, it represents positive brand equity for the individual countries.”

The problem is, Anholt continues, that a Baltic identity becomes a minus when you’re talking to general audiences. “The word ‘Baltic’ is strongly negative as far as general publics are concerned. It is associated not with fast-growing economies and IT, but with a vague image of a miserable, grey, post-Soviet wasteland, probably contaminated, with no culture, no self-respect and nothing of any interest to anybody.”

Anholt came up with suggestions for suitable BSRB slogans including, “The top of Europe” and “The world’s brightest region,” but these were rejected due a politically correct fear of offending others – if BSR is the top of Europe, surely someone else must be the bottom? And if members say BSR is the brightest, they might be implying that others aren’t as clever, which doesn’t sit well with the egalitarian, inclusive flavour of the whole project.

At a seminar on the subject of regional branding sponsored by the Latvian Ministry of Foreign Affairs in Riga recently, bne asked attendees to define what BSRB did not include, rather than what it did. “It’s not about war,” was the rather feeble reply.

But nation branding does have a point, Anholt argues : “Once a government has got its head around these issues, then they can start thinking about how they can slightly alter their style of policymaking, slightly improve their process of selecting investment and innovation – because new stuff is the most important thing – in order to earn a better reputation. Then things can change quite rapidly… in a matter of years.”

That is exactly what has happened in Estonia, which is much more advanced in its branding programme than Latvia or Lithuania. “Brand Estonia” was launched in 2001 to take advantage of the country’s hosting of the Eurovision Song Contest, but has snowballed into something more substantial. Comprehensive style guides, photo libraries and consultancy services are made available to businesses to ensure that the marketing of the country is consistent and of a high quality.

As director of the marketing and communication unit at Enterprise Estonia, Erki Peegel is responsible for the programme. “We understood quite early that we are so small with such limited resources that to have some kind of critical mass there must be real cooperation in different areas such as investment, tourism and exports,” he told bne.

Peegel admits that he and his colleagues had to learn several important lessons on the way. “At one time it was so political that there was even a proposal to stop Brand Estonia. It was high up the political agenda. We learned you can’t do it from the top down with the prime minister saying: “This is what we will be doing’. First there must be agreement with important groups such as businesses, the tourism sector, the media. Plus you have to sell it internally. The Estonian people have to believe in this.”

“In the internet era you must be quick. If everyone knows Estonia as ‘the Skype country,’ then it’s very good, so let’s push it,” says Peegel. “At the moment, cyber-war and the Nato cyber-defence centre of excellence being built in Tallinn are interesting for the media. You never know what will be seen as interesting in two years’ time. But you must be as flexible as possible.”

There lies the challenge for BSRB – can something so vast and amorphous really be flexible and reactive ? Peegel is sceptical about the chances of finding the elusive BSRB. “Personally, I can’t foresee that in the next five years there will be BSR cooperation in branding including Russia and Germany in the brand,” he says.

And despite interviewing numerous people on the subject, no one bne spoke to was prepared to put a price on a strong BSRB, talking vaguely of ‘added value’ or, as Ojars Kalnins, head of the Latvian Institute, which is responsible for promoting the country overseas puts it, the potential of a “powerful developmental tool.”

Kalnins is one of the more convincing advocates for BSRB, but even he acknowledges that there is potential for conflict between regional unity and local “competitive identities.” When you get to the national level, there’s little trouble getting solid facts and figures about costs and benefits – as the $100,000 he’s just spent on a four-page insert in Scientific American magazine proves.

Marcus Andersson of Swedish company GeoBrand, which has been working on the BSRB issue for some time, puts the whole thing into a nutshell. “I was initially sceptical that creating a brand for the Baltic Sea Region could be done,” he says. As an independent academic he performed the necessary research and concluded that it was indeed a vain hope. “Then I became a consultant, so now it is my job to say that in fact it can be done,” he concedes drily.
[Via]