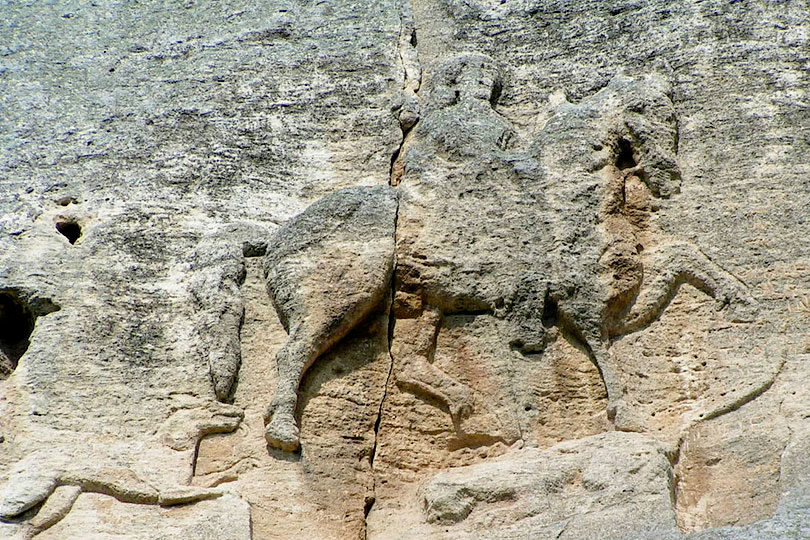 The English-written Bulgarian monthly magazine Vagabond has a very interesting article on how Bulgaria, inmersed in an identity crisis, is trying to find the iconic images that the country will use to promote itself, especially when it comes to tourism. Noteworthy, the Bulgarian citizens have been given the chance to vote which symbols they believe best represent the country’s essence (the results can be read here, if you read Bulgarian). Here is the article:

Horsemen gallop through the thick grass. Turf flies up from their horses’ hooves, their manes stream in the wind, the faces of the horsemen radiate grandeur. In the distance is a rocky plateau. Zoom in. On the sheer cliff appears a relief ofâ?¦ a horseman.

An off-screen voice booms: “Come to Bulgaria, home of the Madara Horseman!” It’s only now you realise that you’re not watching a tourism advert for Mongolia, or a trailer for a new western by Clint Eastwood.

For a moment you might have thought it was a cigarette commercial, but then you realise that can’t be possible in this tobacco-hostile 21st Century. No, you’re watching a tourism clip starring the new symbol that Bulgarians selected to represent their country in the much-celebrated Symbols of Bulgaria campaign.

Of course, this advert doesn’t exist yet. But I wouldn’t be surprised if one appears soon. The Madara Horseman â?? a relief carved into a cliff, most likely from the early 8th Century â?? won the most votes from Bulgarians who cast their ballots in the Symbols of Bulgaria campaign, which closed on 29 June. The Bulgarian Association for Business and Tourist Information (BABTI) organised the initiative. On its site, www.infobulgaria.info/bgsimvoli you can find a long list of sponsors and partners. Almost the entire government, many national media organisations, advertisers and President Georgi Parvanov also supported it.

The initiative began last year with a call for Bulgarians to submit nominations. At the end of this initial phase, the organisers announced that they had collected nearly 20,000 suggestions. However, they left the creation of a list of 33 basic symbols to a so-called Public Council. It included the sort of intellectuals you usually find in every public initiative supported by Parvanov â?? historian Bozhidar Dimitrov, archaeologist Nikolay Ovcharov and choreographer Neshka Robeva, who directs “Lord of the Dance” style shows using Bulgarian folklore.

The 33 symbols selected included the Seven Rila Lakes, a survaknitsa, or decorated branch used in a traditional New Year’s ritual, the St Aleksandr Nevskiy Cathedral, shopska salata, the kebapche, yoghurt, and Melnik wine. After several months of voting, Bulgarians finally had to choose one from a shortlist of the five most popular nominations. The Madara Horseman won by a nose over the Cyrillic alphabet, the oil-producing rose, Tsarevets, and Rila Monastery. According to the organisers, 1,058,473 people cast their votes. Will Bulgaria become really recognisable now?

At first glance, there seems to be a practical reason for holding the vote. Bulgaria still doesn’t know what symbol to put on the flip side ofÂ the euro. The catch is that the country will (perhaps) enter the Eurozone in 2012 at the earliest. It is a very big perhaps as Bulgaria has soÂ far failed to meet most of the criteria for adopting the euro, save for one important victory – it won the right to spell the word euro in Cyrillic. Besides, the country already has an institution responsible for deciding what its money should look like, but it’s not BABTI â?? it’s the BNB, the Bulgarian National Bank.

The practical arguments go beyond the euro coin. Bulgaria is going through a classic example of an identity crisis. It considers itself one of the oldest countries in Europe, yet in the 1,300 years that have passed since Han Asparuh’s Bulgars settled in the Balkans, nothing has been created that unequivocally represents Bulgaria. Even the Cyrillic alphabet, which was developed by intellectuals from the First Bulgarian Kingdom, is internationally associated with Russia – for obvious reasons. In the past decades Bulgaria became infamous abroad â?? among those few foreigners who even knew it existed â?? for the “Bulgarian umbrella”. This ingenious deadly weapon, which injects deadly ricin, was used to murder dissident Georgi Markov in London in 1979.

Even more depressing for the Bulgarians, the country was also associated with the assassination attempt on Pope John Paul II. On the up side, Bulgaria has gained a bit more positive notoriety recently, thanks to the footballers Hristo Stoytchkov and Dimitar Berbatov.

Bulgaria’s image problem became especially obvious last year when the State Tourism Agency released an advertising clip for Bulgaria. For 45 seconds it showed wine cellars, spa procedures in bathtubs full of rose petals, parties on the beach, ski runs and golf courses. These things are so devoid of character that if it hadn’t been for the shots of Rila Monastery at the beginning and Cape Kaliakra at the end, even a Bulgarian might think they were watching a commercial for the United Arab Emirates, especially as they’ve started building artificial ski runs there, too.

The discovery of an adequate and objective symbol for Bulgaria would help considerably to present the country abroad. Yet, how wise was it to conduct the search via a national survey of Bulgarians themselves? The question raises philosophical conundrums. Making a nation choose a symbol to represent itself objectively is like trying to do psychoanalysis on yourself. Of course, for an outside observer, the suggestions Bulgarians offered revealed a whole lot about themselves rather than the flip-side of the euro coins.

Bulgarians don’t have a realistic idea of what’s important.

Locked up for 45 years in that open-air prison known as Socialism, they were deprived of the right to travel abroad and visit foreign tourist attractions. The transition to democracy with its economic crises has also prevented many Bulgarians from going abroad â?? it is precisely these homebodies who participated in the Symbols of Bulgaria campaign. They were the ones who came up with nominations like the Erma River Gorge. It’s near Tran, almost on the border with Serbia, and is quite picturesque. But what is it doing among the candidates for the symbol of Bulgaria?

Bulgarians don’t know who they are.

They’re proud of the golden treasures and tombs of Thracian kings and hence nominated the Thracian city of Perperikon. Yet no one knows what percentage of contemporary Bulgarian genes is made up of Thracian DNA.

Otherwise they wouldn’t have nominated the kebapche, which is being enjoyed in Romania, Serbia, the Republic of Macedonia, Greece and Turkey. The same goes for hot peppers.

Bulgarians live in the past.

They know perfectly well that in recent years nothing has happened in their country that deserves to be immortalised on a coin. John Atanasoff invented the first computer in the United States. Elias Canetti was born in Ruse, but worked in Europe. The artist Christo refuses to speak Bulgarian! For that reason, they chose things that were at least 200 years old for their cultural-historical symbols â?? monasteries, ruins, medieval capitals â?? everything that reminds them of their glorious past.

The organisers of the Symbols of Bulgaria campaign were satisfied, however. “We haven’t seen this kind of mobilisation for a long time, this kind of enthusiasm, especially for a noble cause,” said President Parvanov. “The campaign achieved several very important goals. It reaffirms the self-esteem and identity of Bulgarians in a very positive way. It has had an educational effect. Many people have learnt facts about Bulgarian history and have become more familiar with our natural environment. We have five, and perhaps an additional 50 Bulgarian symbols that are generally accepted here in Bulgaria, as well as being recognisable abroad.â?

The campaign continues. Now it’s time for wonders of nature to compete. The candidates include the Balkan Mountains, the edelweiss (no one has seen edelweiss in its natural habitat for many, many years), mineral water, the Seven Rila Lakes and the Wondrous Bridges in the Rhodope. There’s also work to be done on the initiative’s other goals, which BABTI announced on its website â?? just below the bank account number where patriotic Bulgarians can assist the campaign financially. The campaign committee has vowed to build a park dedicated to Bulgarian symbols in Sofia; to organise a competition based on the Bulgarian symbols theme, complete with prizes; to establish a travelling exhibition-presentation of Bulgarian symbols; and to create and distribute products carrying the Bulgarian symbols theme around the world, via the Foreign Ministry.

Nowhere is it mentioned how much money has been collected from advertisers and donors. We at least hope to find out whether there will indeed be an advert starring the Madara Horseman.