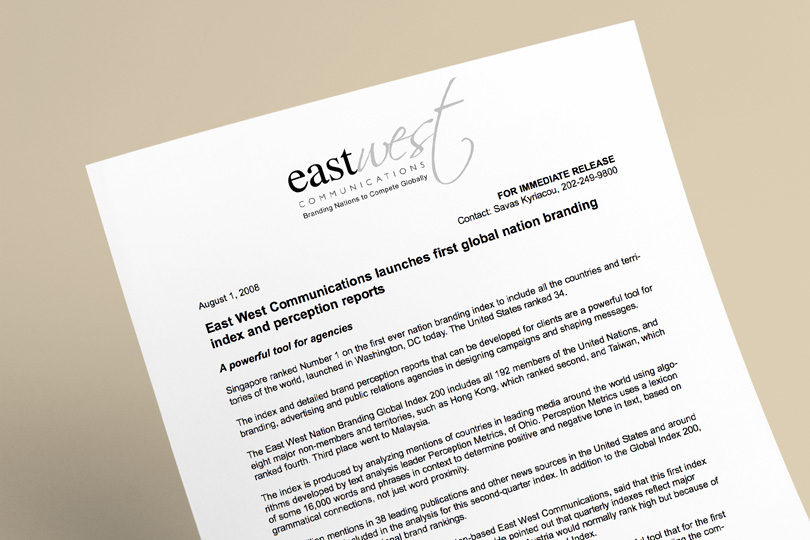 Singapore ranked Number 1 on the first ever nation branding index to include all the countries and territories of the world, launched in Washington, DC today. The United States ranked 34.

Five million mentions in 38 leading publications and other news sources in the United States and around the world were included in the analysis for this second-quarter index. In addition to the Global Index 200, East West produces regional brand rankings.

Thomas Cromwell, president of Washington-based East West Communications, said that this first index will be followed by quarterly and annual updates. He pointed out that quarterly indexes reflect major developments in countries, good and bad. For example, Austria would normally rank high but because of a major family abuse scandal this time it ranked 146 on the Global Index.

Cromwell said, “The index and the technology that produced it represent a powerful tool that for the first time enables countries to analyze scientifically how they are viewed in world media, including the competitiveness of specific sectors such as tourism and investment.”

East West will use this technology to produce specialized reports for countries that detail the strengths and weaknesses of their brand, and compare them to other countries. Similar reports can be produced for regions, cities, sectors, ethnic groups and major personalities. Perceptions can be measured worldwide and in specific media markets, such as the United States or Europe.

Explaining the importance of nation branding, Cromwell said: “Every country is a brand that needsÂ managing. International prestige, investment, exports and tourism are all closely tied to perceptions of your brand.â? He said, â??Using our reports, governments can address their branding and messaging weaknesses, and build on their strengths.”

He noted that because a single newsworthy event, such as a major national sporting competition, a government initiative, a scandal or a coup, could skew results for a quarter, if not longer, that it will be the annual index that carries the most weight. The first annual Global Index 200 will cover 2008 and be published in January next year.

East West is one of a handful of companies worldwide that specializes in providing branding and communications services to countries. To see the full Global Index 200, as well as regional indexes, visit: www.EastWestComs.com.