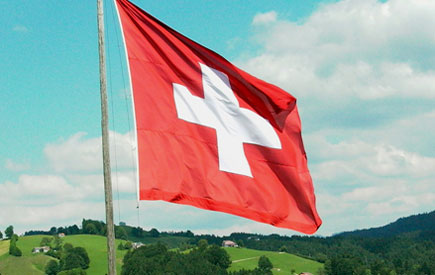 At Presence.ch, the Swiss have a nice website with materials explaining Switzerland’s efforts to mantain and enhance its nation brand. One of the them is this article and graphic about Switzerland’s key elements of its national brand: 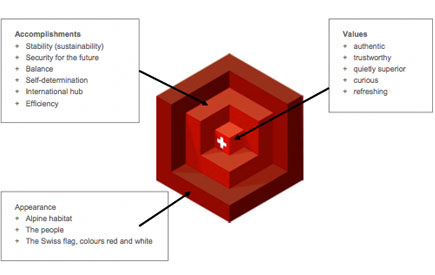 The 14 key elements are as follows:

1. Alpine living space: Few landscapes evoke such strong associations in Europe and beyond as the Swiss Alps. Switzerland and the Alps have always been regarded as synonymous. But even more important than the mountains themselves are the Alpine environment and its characteristic features, the result of the interaction between nature and the labour of human beings.

2. Its people: It is only through its people that Swiss history, values and achievements become alive and tangible. Swiss men and women have made the efficient, connecting ‘system’ into an organic community of independent human beings for whom their personal self-determination and unity in diversity are the highest values. They make Swiss achievements into something tangible and therefore personally relevant.

3. The Swiss Cross, colours red and white: Switzerland has an unmistakable and widely known symbol – the Swiss flag, a combination of the cross and the colours red and white. It is a powerful instrument and if used correctly can have a powerful impact. It can create a subtle emphasis or it can “sell” effectively. It guarantees recognition and embodies strength and uniqueness. This is why it must be the symbol for Switzerland.

4. Stability (sustainability): Switzerland stands for stability. The foundation for this is Switzerland’s political and economic system with its strong emphasis on the reconciliation of differences. Switzerland is not usually a trail-blazer but this in turn means that the solutions found here are stable and sustainable. This stability is highly relevant and distinctive in all target groups.

5. Secure future: Stability and sustainability bring a high degree of predictability and reliability. The ingenious system of rules and conventions on which this is based brings a high degree of future security for the individual and for society as a whole. This is both unique and attractive in the modern world.

6. Balance: More than almost any other country, Switzerland has succeeded in bringing ostensible opposites together and in reconciling great differences to produce fruitful cooperation. It is not diversity in itself but the way that diversity is dealt with that is special. This determination to connect and to reconcile differences makes a key contribution to the stability and the secure future of Switzerland.

7. International hub: Geneva is the humanitarian capital of the world. Companies are increasingly moving their headquarters to Switzerland, every year the WEF in Davos brings together opinionleaders and decision makers from the worlds of politics, business and science. During Art Basel the city becomes an international art metropolis.

8. Self-determination: The origin of Switzerland is associated with a myth of freedom and today Switzerland is one of the most democratic countries in the world. Personal as well as national self-determination are important components of Swiss identity, the cornerstones of which are direct democracy, federalism, the principle of subsidiarity and a low ratio of state expenditure.

9. Efficiency: Directness is greatly appreciated in Switzerland. Roundabout routes and irrelevant details have no place in the Swiss system. This feature is most conspicuous in the federal form of government but it is also evident in the economy, architecture and design. Efficiency is a characteristic quality that runs through all areas.

10. Authentic: Switzerland is unique. As a result of geographical and socio-cultural aspects, Switzerland has many inimitable features and characteristics. This combination of uniqueness with modesty and discretion means that there is no scope for flashy display or artificiality. Showiness is shunned and authenticity is the keyword.

11. Trustworthy: Trust presupposes performance, quality, transparency and stability and is based on consistency. Switzerland embodies reliability and stability – qualities that are crucial in many areas of life.

12. Quietly superior: Products and services from Switzerland are notable for their outstanding quality. This quality is based on the constant striving for better and more efficient solutions in all sectors. Swiss quality is not showily displayed but is allowed to speak for itself.

13. Curious: A small country without resources of its own can compete internationally only through the quality of its products and services. This culture of quality is marked by meticulousness, constant efforts to improve and above all by the tradition of curiosity of the people who live here.

14. Refreshing: Freshness is typical of this country and its people. The Alpine environment with ist high mountains, clear lakes and rivers refreshes the spirit of visitors. The people who live here are uncomplicated and direct. A fresh approach is also typical of artists who live here, for example the unusual perspectives of Fischli / Weiss or the playful and effervescent installations of Pipilotti Rist.

Switzerland is in the happy position of not being unknown. Rather, thanks to strong but positive clichés such as its beautiful landscape, watches, chocolate as well as its reputation for valuing high quality and reliability, it already has a well-defined profile in the community of nations.

The associations people make with our country have taken decades to form and are undergoing a constant process of development. Other factors contributing to our image include our government, international organisations such as the Red Cross, and internationally active companies such as Roche with its product ‘Tamiflu’, as well as top sportspeople such as Roger Federer and the Alinghi team. It is easy to see that a country’s image cannot be controlled and modelled to the same extent as that of a consumer product. A country is not homogeneous item like Coca Cola.

According to Simon Anholt, one of the leading experts in image marketing for countries, the ‘Switzerland brand’ is one of the strongest and most influential in the world.

All the same, it would be wrong to assume that once a good image is achieved it sticks. Negative events and reports, which inevitably happen, leave traces. On the one hand it takes the need to foster our values, and on the other the constant and sustained outreach to target groups and networks that are important for Switzerland. This is precisely what Presence Switzerland does.

PRS (Presence Switzerland) ensures that Switzerland maintains a credible and authentic image through all the various activities that it initiates and co-ordinates abroad. We not only highlight the traditional Swiss strengths in the areas of the quality of life, governance, and environmental friendliness, we also promote lesser known aspects of Switzerland such as our innovative spirit, our education system, and our direct democracy.

Beyond Presence.ch, the Swiss also have the SwissWorld.org portal, where the government offers a coherent, consistent, ordained and structured vision of Switzerland, with pictures, stories, typically Swiss items (the Swiss seem to fear not cliches and stereotypes, but build on them), Swiss personalities that embody Switzerland’s brand…

Last but not least, don’t forget to read through Story Switzerland, very inspiring.