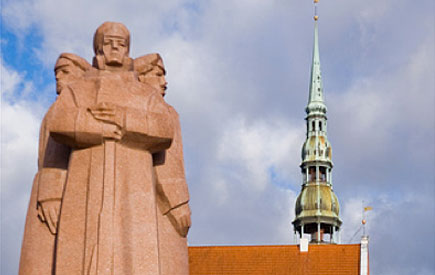 Mike Collier from The Baltic Times has published an interesting interview with Ojars Kalnins, director of the Latvian Institute, which represents Latvia at the Baltic Sea Regional Brand (BSRB) project. Here are the questions and answers:

You recently chaired a seminar on the subject of attempts to create a Baltic Sea Regional Brand (BSRB). What was the reason for it?

I’ve been participating in these discussions for about three years now and it’s an ongoing process. It’s not going to be an easy one, for a couple of reasons. One is that there’s no one organization that’s responsible for it. Right now it’s being maintained by a group of enthusiasts – individuals in each country that believe in the idea and want to go a bit further, but they don’t have a lot of backing other than the Baltic Development Forum which isn’t an organization per se, it just organizes conferences.

What was unique here was that the Latvian Foreign Ministry sponsored this conference – the first time that a government of any of the BSR states has actually had a conference on the topic. Part of that is also because I’m a big supporter of the idea, so I’ve been involved in it internationally. We’re connected to the Foreign Ministry, so it was natural that we would supplement the ministry’s creative idea of ‘Balticness’ by having a conference.

Did you make much progress?

I don’t know if there were any major breakthroughs at the conference. It was just carrying the idea further and identifying the people who might want to continue working on this and trying to convince people that there is a reason for doing this.

I look upon it as ‘PVN’ or added value. If we can create a brand image for the region that adds to the national images of each country then it could be worthwhile. The further away you get from this region, the more value it could have. In the Asian countries and South America they look at regions rather than individual countries.

Apart from the organizational problem, the other problem is from thhe Scandinavians or Nordics – depending upon how they identify themselves – because to them, that’s the regional designation.

[They believe] ‘Baltic’ means Latvia, Lithuania and Estonia, and has different associations. In their minds, ‘Baltic’ just meant these three poor former Soviet countries with negative images. My contention is that that was true in the past but if you want a regional brand you can’t escape from the word ‘Baltic’ – at least in English.

If BSRB does take hold, what is it worth in financial terms?

I don’t think you can put a number on it. Right now it’s subliminal, it’s a matter of perceptions. Without a doubt it’s an advantage for the Baltic states to be perceived with the region because the region has always been perceived very positively. The Estonians at one time wanted to reject the whole idea of ‘Baltic’ and just become Nordic, and that made sense because Nordics and Scandinavians had a positive image. But we three Baltic states cannot escape that designation – at least not in our lifetime. You don’t fight it, you just try to build it and maybe expand it.

Wouldn’t it be a lot easier to forget about including Russia in the BSRB effort?

It’s necessary if you’re going to work within the Council of Baltic Sea States because Russia is a member. You could probably do a tourism campaign without them and you could do a promotional campaign with just a few of the countries involved.

But the more Russia is engaged with democratic countries, the more it will be forced to start acting like one. Engaging them is better than totally ignoring them, but it’s not going to be an easy prospect. In trying to sell the idea of BSRB, I think our hardest customers are Russia and Germany. The Germans for the most part don’t have an interest in it as they have an identity that has nothing to do with the Baltic Sea.

We end up doing two things at the same time – we’re competing with each other but our region is competing with other regions. The idea of competitive identity would be to say that any country, company or institution that’s part of the Baltic Sea region has got to be good because it’s connected with what’s going on here in a dynamic region.

Nationally, yes we’re competing with other countries for attention but it’s not trying to say “They’re bad and we’re good,” it’s saying “You know about Sweden, you know about Germany, have a look at us.”
Moving specifically to Latvia, what would you say is the Latvia’s international image right now and where is it going?

Here I’d agree with [national brand expert and government adviser] Simon Anholt and say that Latvia doesn’t have a brand. But as he said, “You don’t need a brand – you’ve already got a brand in Riga”. That is something that should be the key to our strategy. Riga is a much better-known place than Latvia and probably always will be. It’s got all the makings of a good brand plus a city is easier to brand than a country.

What we do is use Riga’s existing recognition and popularity and build on that to get people interested in Latvia whether it’s for tourists, or to get research, science and educational cooperation. They may come to Riga for a conference but then we can get them to stay because the University of Latvia has got something really interesting they can be involved in.

We must use Riga to our advantage and in the long term we have identified three areas where Latvia has the potential to get greater recogntion, and they are all things that can make any smaller country well-known today.

One is culture – you just have to get your culture up and out there. Science and education are also very important because it means innovation. You don’t need a lot of people, you just need a few very bright people to come up with great ideas. But to me, where we have the real potential is the third area because this is where all three tie in together: the third area is nature and environment.

We have a unique environment. It may not be spectacular – we don’t have mountains or tropical forests – but we do have one of the best preserved countries left in Europe. Forty percent of Latvia is uninhabited, so it’s a nature reserve, almost like a national park. But where we could really become well-known is not just that we have a beautifully-preserved country but that we become environmental specialists.

That becomes our national philosophy, preserving our environment but also learning how to do things better through innovation, science and research. If we can become real experts in nature that even ties in with the cultural aspect because our culture as always been tied to nature.

Here is a good example. This is a four-page insert we just did with the July edition of the magazine Scientific American which cost $100,000. They offered an opportunity and our two big universities agreed along with the Ministry of Education. The Latvian Institute just put it together.

The key is that on page one we use a story about amber and how a researcher at Riga Technical University has discovered how to make thread out of amber. What I like about that is that amber ties in all three of these Latvian elements: it’s found in nature, it’s part of our culture and now a person from Latvia has figured out how to use amber in a way no-one else has ever done before.

The goal as simply to get people’s attention. Most readers of Scientific American have probably never heard of Latvia and couldn’t imagine something like that coming from here. It has some shock value so we can say: “Look, we’re doing interesting things here, too.”