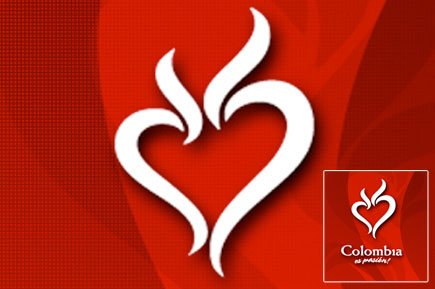 In 1996, when a Colombian government official first approached marketing consultant David Lightle about a campaign to improve the nation’s image, Mr. Lightle looked around Bogota and told him the truth: “Don’t waste your money,” he recalls saying.

The country, he says, “was a mess.” Colombia was convulsed by violence from leftist guerrillas, and its president, Ernesto Samper, had been stripped of his U.S. visa amid evidence that drug traffickers had financed his election campaign.

When Colombia called Mr. Lightle again in 2004, the view from Bogota had changed for the better. Colombia’s tough-minded President Alvaro Uribe had developed a close alliance with Washington, and had unleased a military offensive that had the guerrillas reeling.

A ‘Colombia is Passion’ keychain, one of hundreds of products bearing the campaign’s heart-shaped logo.

Nearly 250 companies have licensed the logo, which also appears inside boxes of Colombia’s exported roses and on the tail of one of the planes flown by national carrier Avianca. There’s even a “Colombia is Passion” bicycling team, which boasts the world champion among cyclists younger than 23 years old.

Eager to highlight their advantages, and play down their faults, Colombia and a growing number of countries are using branding strategies to set themselves apart in the global marketplace. But even as country branding campaigns proliferate, some critics say that such efforts often amount to mere sloganeering and question how much they actually enhance a country’s reputation.

Simon Anholt, a British author and consultant, is credited with coining the phrase “nation brand” in 1996. He says it summed up a simple observation that “it’s the responsibility of good governments to be, in effect, brand managers.”

Now, he says, advertising and marketing entrepreneurs have so distorted the concept, that he sometimes is sorry he brought it up. “It’s a lame dog following me the past 15 years, and I’ve spent that time trying to shoot the damn thing,” says Mr. Anholt, who edits the quarterly journal Place Branding and Public Diplomacy.

Rebranding requires sweeping societal transformations, he says, not just clever public relations. He says South Africa rebranded when it ended apartheid; Ireland when it became a prosperous nation, rather than a mass producer of immigrants; Slovenia when it embraced democracy, joined the European Union and showed that a historically unstable part of Eastern European could be different.

If a country does undertake fundamental changes, marketing can complement them, Mr. Anholt acknowledges. After the death of longtime dictator Francisco Franco in 1975, Spain went from an economically hobbled backwater to a thriving democracy. Spain helped sell the change to tourists with a colorful logo and the slogan “Everything Under the Sun.”

But campaigns based strictly on marketing can fall flat. A decade ago, a push by the British government of Tony Blair to adopt the catchphrase “Cool Britannia” flopped because the slogan was too narrow, says Thomas Cromwell, president of East West Communications in Washington. “Cool Britannia,” first applied to a British resurgence in pop music and fashion, didn’t characterize British companies and was ill-suited to attacting older tourists, he says.

María Claudia Lacouture, Colombia’s general manager for country image, says her country is ripe for rebranding because the popular perception of Colombia has lagged far behind the improving reality. Kidnappings and assassinations, once frequent occurrences, are now comparatively rare. President Uribe’s strategy to take the war to the Marxist guerrillas has culminated this year in the death of three of the insurgency’s top leaders.

“Colombia is Passion” is designed to help change the conversation about Colombia, she says.

Colombia is working with a limited budget, having spent just $5 million on the campaign since its inception. Even so, its logo won an American Graphic Design Award in 2006, and the “Colombia is Passion” Web page averages 77,000 monthly visits.

Tourism and foreign investment are rising, though Ms. Lacouture doesn’t claim that the campaign is responsible for all of the progress.

Kokoriko, a big Colombian chain of chicken restaurants has rolled out a “Colombia is Passion” meal, given away CDs tied to the campaign and adopted “Passion Made Into Flavor” as its own slogan. “Our customers love it,” says Guillermo Beltran, Kokoriko’s marketing director.

Not everybody is sold on “Colombia is Passion.” A well-designed campaign “should be rooted in [qualities] that distinguish Colombia,” says East West’s Mr. Cromwell. “You could just as easily say ‘Bolivia is passion’ or ‘Venezuela is passion.’ ”

He says Colombia should have adopted something closer in spirit to the Juan Valdez coffee campaign, which features a sombrero-clad Colombian farmer who has become an international icon.