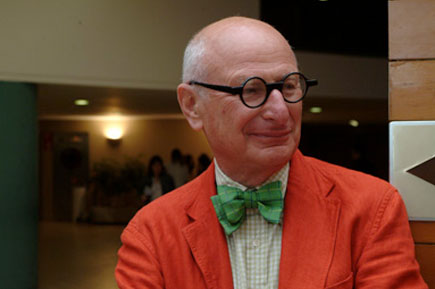 “We want Lithuania’s economic image to be built systematically and consistently. Therefore, we are starting work with the preparation of fundamental documents. For this purpose, we have invited Wally Olins whose advantage lies in his extensive experience and not only communication with top-ranking persons in an effort to identify the advantages and disadvantages of a country’s image but also participation in the preparation of specific documents – strategies and communication plans,“ Mantas Nocius, LDA Director General, has said.

Wally Olins and Jeremy Hildreth, Olins’ assistant, visited the Lithuanian cities of Vilnius, Kaunas and Klaip?da to collect material for documents and met with the Government and business representatives, with the country’s top-ranking officials.

Olins says that it is important for Lithuania to create confidence and find an idea that would encourage exporters to enter foreign markets as well as help the state to attract more tourists and investment. According to him, the Baltic country’s communication with the outside world is insufficiently defined. Olins mentions Estonia and its well-known orientation towards information technology as an example of success.

Wally Olins is one of the world’s leading experts in nation branding and has helped branding Poland and Portugal among other countries. His company Saffron Brand Consultants has offices in London, Madrid, New York and Bombay.

Last year, Lithuania made an impact in the nation branding sphere when it told the world it was considering to change its country name.