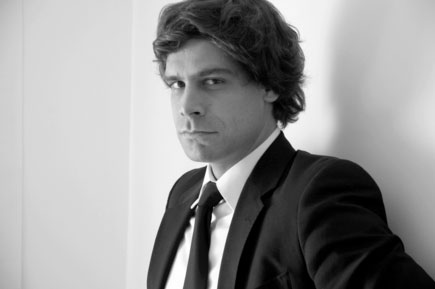 Jose Filipe Torres is considered a world renowned specialist in Country Branding. He is the CEO and Head of Strategy at Bloom Consulting, a Spanish branding consulting company with offices in 7 countries. Since the age of eighteen, Mr. Torres has been working in the consulting and design industry and in 2003 he established Bloom Consulting. Torres has worked on country branding projects with Latvia, Portugal, Spain and Bulgaria and he also advises Serbia, Slovenia and Sweden. He has been kind to contribute to Nation-Branding.info with the translation of an interview he recently gave to Economist, a Serbian magazine – an interview whose content, he remarks, is very representative of his ideas about country branding although the context, Serbia, may not be the most pertinent.

Do you have any positive association of Serbia?
A new country. The best image of all

Serbia has generally a very bad image in the world? What is harder- to correct a bad image or create a new one? Do you know of any country that has succeeded in overcoming the popular mishaps to become renowned for its positive aspects?
I believe Serbia does not have a bad image in the world. I think Serbians are the ones that think that Serbia has a bad image in the world. Serbia had a very complicated moment in its history. Serbia was at war.  As strange as this may sound, if a war is not based on idealism, it will not leave a negative image in that country. Serbia was ruled by a “dictator”,(I put it in brackets because it was not a totalitarian regime), that no longer is in power and was judged and sentenced for war crimes. It was not the country’s belief, but one man’s belief. History has demonstrated that most countries that were at war overcame negative perceptions.

The question is: Can a Dictator influence the countries image? The answer is: Not necessarily, several countries that had a dictatorship do not have a negative image today (i.e. Chile, Italy) also as you can see, there are several countries today that are still led by dictators and don’t have a bad perception at all, the reason is that the country’s perception (good or bad) is very much associated with its economic development. A country with a more developed economy has a better perception internationally than a country with a less developed economy

To shift or empower most country’s perception one needs to focus on developing a strategy that is aimed at creating an economic and social development plan or help to empower the one that the country currently is predicting to implement.  And you are not going to achieve that by developing a logo, a Tagline, or with the redesign of the national flag. I believe China is a great example and the best thing of all is: No country brand consultant was involved in that process.

Should we wait for all the political problems to be solved and than to begin branding or can this be done simultaneously? (Mr. Philip Kotler had said in an interview for our magazine that it will be necessary to solve the issue of Haag and Kosovo, and after that to begin thinking about country’s popularization)
Ideally yes, but in reality- no. Countries do not have perfect moments. There is never a perfect moment in life and countries are no different. It is worse to wait, because time goes by and you are missing several opportunities.

What would be your starting point in Serbia?
Applying our (Bloom Consulting) Methodology. First step: Research. Start to understand in depth your economy and your psychology, by interviewing several audiences (Public Sector- Political party in power and its opposition, Several Institutions, Business associations, Chambers of commerce, Universities. Private Sector – renown Serbian business men, Opinion leaders, Journalists and ultimately we would do an international poll to evaluate your current perception), from that moment on we would invite public opinion channeled by a University and interesting things would start to show up. Then we would move towards developing the strategy. Whenever we (Bloom) create a brand strategy we always base it on statistics and accurate information and never on our personal opinion

Should Serbia’s focus be on attracting foreign investors and large companies or attracting tourists?  Would you recommend doing a little bit of everything, something for everyone, does this have the right effect?
It all depends on the Economic and Social development plan established for Serbia. It is not a straightforward answer, and several variables should be taken into consideration. The first one is:  Who and where is your target audience and secondly what are their needs and concerns. So you understand, you can have hundreds of different types of foreign direct investment and the same for tourism.

Regardless of these findings, we (Bloom) believe that one brand does not suit all audiences’ needs. Meaning, we do not believe one brand can do it all. Therefore we divide the country brand into two: 1) Tourism and 2) Trade. The reason why we separate it is because the audiences’ needs are completely different. The first one is mainly looking for relaxation/amusement and the second one is looking for the exact opposite. For instance: The country’s reputation as a laid-back holiday destination then overshadows its desired perception as a good place for high-tech investment, for instance. 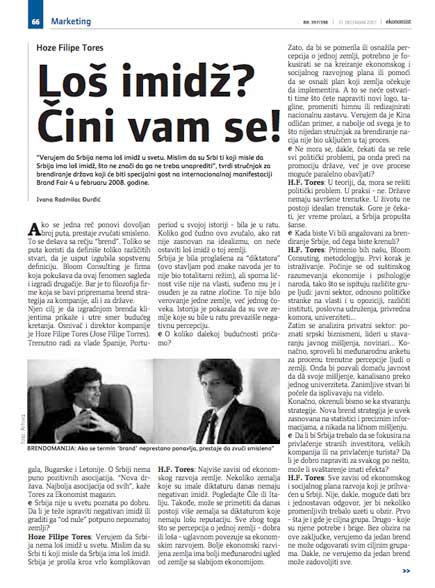 How does the popularity of one’s country help its brands and their promotion on foreign markets?
There are several answers for that question, but I will focus on the one that is most applicable for Serbia. Country brand strategies should never influence or dictate any strategy in the private sector (companies). It should work as “door opener” so that companies in the private sector can internationalize. Meaning it should work as a B2B (business to business) brand rather than a B2C (business to consumer) brand.  Basically there is not a direct correlation, but it will help (credibility wise) for commercial brands to operate in that specific market.

In what way could the Serbian nation be branded and does it correspond with country branding?
I don’t know. My opinion is not relevant because the steps mentioned in question number 4, were not executed

Serbia is known for its sportsmen, could this contribute in any way to Serbia’s positive reputation?
Yes, it will give it notoriety, but not necessarily shift most perceptions.

The City of London is memorable for its telephone booths, red busses and characteristic taxi-cabs. Have you ever advised any city to begin building its image on such outstanding details? Can you give us an example?
No, I’ve never recommended any city to build infrastructure to change its image, or merely to place it on the map, but I don’t discard that possibility. If you go to Copenhagen on a clear day, right before you land you see gigantic windmills. To be honest, me as a consumer, I don’t even know how effective those windmills are, but I can tell you one thing, I receive clear messages– Clean, Advanced, Power. However, normally we do not recommend any kind of change in infrastructure. Our focus is more strategic rather than operative.

You have worked on branding Bulgaria. To be candid, Bulgaria is known in Serbia for its sea, which has always been known, even today, not for the beauty but for the lower prices compared to other coastlines. The question is: what have you changed in Bulgaria’s image, or is it still an on going process and what are the consequences?
Bulgaria, when we started the project had a set of specific needs in its economic and social development plan, that were very much related to what kind of foreign direct investment should the country be aiming at – The focus was attracting entrepreneur foreign direct investment- Venture Capital and Private equities. To the naked eye, it is normal that you don’t see any shift in perceptions today, but you will see a shift in finances and economic growth, that in the long run will be much more visible.

How much time is needed for someone from abroad to `scan` the situation and determine the necessary steps? How much time is needed to feel the effects? How long does it take for the country’s branding investment to pay off?
Scan – 3 months
Determine necessary steps – 1 month
Feel the effects – 3 to 4 years
Pay off – depends of the investment you make implementing it. But every strategy should have a specific goal that should be measured – GDP increase.

We would like to thank Mr. Torres and Bloom Consulting for supplying this interesting interview, and encourage other nation branding experts to contribute to Nation-Branding.info to share his/her thoughts and experiences on this fascinating industry.