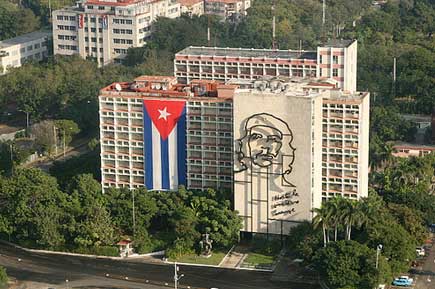 This is certainly not an article about nation branding specifically, but it’s interesting to read nonetheless, since it revolves about the relationship between the Che, the revolutionary Cuban leader, and by extension any prominent leader, with the country he is most associated with, Cuba. The author Carlos Alberto Montaner explores the avantages and risks of tying a charismatic personality with a country. It’s good for the US and Michael Phelps, or Sweden and Bjorn Börg, but is it with Cuba and Ernesto “Che” Guevara?

”The movie Che, outstandingly directed by Steven Soderbergh and very well acted by Benicio del Toro, is composed of two parts. The first is quite boring and manages to put the most enthusiastic viewer to sleep. The second, believable and effective, projects the image of a failed man who embarked in an absurd adventure that cost him his life, but it is good cinema. You don’t have to admire the Boston Strangler to opine that the movie made about him by Richard Fleischer in 1968 was excellent.’‘ That opinion is not mine but that of Orlando Jiménez-Leal, the most cultured and subtle of all Cuban filmmakers.

It may well be. In any case, Ernesto Guevara is living through a major cinematographic apotheosis. First, in The Motorcycle Diaries; now, it’s Che’s turn.

Both movies arrived preceded by 10 million T-shirts with Korda’s famous photograph converted into one of the most widely disseminated images in the past 60 years, along with half a dozen biographies, some very good (Jorge Castañeda, Fernando Díaz Villanueva) and others more or less off the mark. Unquestionably, the Cuban government has been extraordinarily successful in marketing this mythical personage.

What the Cuban government (or the Venezuelan, Bolivian, Nicaraguan or Ecuadorean government) has not perceived is that as Che’s image is imposed, the perception of the countries that vindicate him as a kind of national totem is damaged.

The specialists in branding, or ”brand image,” know perfectly well that an exemplary athlete is perfect for endorsing the quality of a cereal, or that a good, beloved and admired actor such as Paul Newman could recommend and sell millions of bottles of salad dressing. But it would not be at all smart to try to market soap or cars by associating those products to the name and image of, let’s say, Tirofijo, the legendary Colombian butcher who led the FARC narcoguerrillas until his recent death.

Nations have a certain international image and that is very important. Mentally, when we think about Switzerland or Canada, we think of orderly, clean, secure, efficient, serious nations that are worthwhile visiting, investing in, or buying the products they manufacture or the services they offer.

Unfortunately, the information associated with the image of the most radical Latin American countries is usually negative, not because the sinister CIA destroys our perception of those nations but because of the projection and style voluntarily assumed by the peculiar presidents who lead them and the icons they use as symbols.

How can one have a good perception of Venezuela when its brand image is a looney clad in red who spouts nonsense and insults day after day? True, the most identifiable image of a living politician in the whole planet is that of Fidel Castro (the word ”living” may be a slight exaggeration), but think of the price that Cuba has paid for that brand identity of beards, soldiers and bullets inevitably linked to ruckus, violence and disquiet.

All this has been measured by a big expert on ”image-country,” the creator of the concept of nation branding. I speak of the Englishman Simon Anholt, head of the Anholt-GfK Roper Nation Brands Index and author of a refined methodology of surveys that classify the external perception of nations in accordance with six categories:

In the last report I read, out of 50 countries scrutinized, Cuba and Ecuador rank among the five with the worst image, both sharing the 46th spot. (The 50th spot, of course, belongs to Iran.) Venezuela, Nicaragua and Bolivia — the other components of Latin America’s carnivorous left — were not analyzed but presumably would rank among the worst-perceived nations.

Why? Among other reasons, because of the image of Che. With every T-shirt they sell, every new movie they show, the nations associated with that icon or family of ghastly symbols sink another inch in the estimation of an amused world that smiles, snaps quaint pictures and reaches melancholic conclusions. How odd that their leaders don’t take notice.