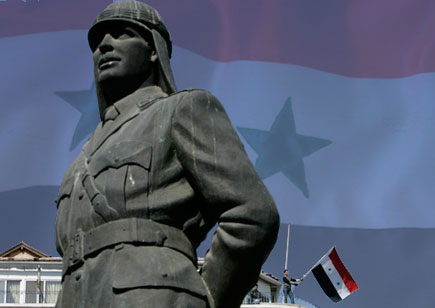 Rime Allaf, a Syrian international consultant specializing in Middle East affairs and an Associate Fellow of the Royal Institute of International Affairs, also known as Chatham House, has written an entry in which she discusses the convenience of Syria entering a nation branding program. According to her, “Syria is not ready for nation branding, not only because it first needs to work hard to get to a “neutral” position from which branding can begin”, but also because she dreads to think of the qualifications of the branders and communicators who will be designing the campaign, the slogan, or the brand. “God help us”, she says, “if they stick with the ubiquitous “Road to Damascus” or “Cradle of Civilization” lines without bothering to undo years of negative imaging“. Here is the article.

Syria on their minds: the re-positioning battle

In a world where nation branding has become the order of the day for most governments, Syria has a lot of catching up to do and faces challenges on several dimensions. It would normally be reassuring to hear the terms “marketing”, “public relations” and “image” being mentioned hesitantly in official Syrian circles, but there is a real danger that this sudden awakening may result in a sloppy and simplistic campaign of no strategic depth, supported by non-expert contributors with no background in these disciplines. This would be a sure recipe for spectacular failure at the most sensitive of times, when Syria needs to attain an image commensurate to its reflection and ambition.

Communication, as an umbrella of all these marketing branches, is too serious a matter to leave to amateurs. It’s a subject about which I have been preaching for years, in the hope that Syria, and Syrians, would recognise its impact in the age of technology driven information. Alas, the understanding of marketing has come to include every retail or communication activity under the sun, while people with dubious degrees of qualification claim professional positions in that field. A cursory glance at numerous ads in the private sector would reveal that Syria is full of marketeers, in the modern sense of the word, working in a business environment that utilises the full scope of the principles of marketing communications. In reality, the discipline is still in its infancy, and it needs to be developed to allow Syria a competitive chance with even the simplest of product ranges, let alone the intangible business of image.

On a national level, in the public domain, marketing communication is even more of a sensitive issue, as it puts Syria at a disadvantage in contrast to opponents (and even allies) whose discourse, spin and self-marketing is more sophisticated, reaching more influential parties and the all-important opinion makers. Of all of Syria’s shortcomings in this domain, the following are the most significant, and have been the most detrimental to its perception in the world.

First, positive connotations with Syria, if at all known, are mostly historical or socio-cultural, and therefore rather irrelevant to an improvement of its current image and perception. This includes allusions to the country’s richness in historical relics, the language of Christ still being spoken in Syria, Syrian hospitality and cuisine, and similar nice notions of little import on the overall perception.

Second, negative connotations are mostly political, having managed to grab headlines and become spontaneously associated with Syria over time. This includes the usual accusations of radicalism, rejectionism, support for terrorism and even pan-Arabism (currently considered confrontational by some sources), and a long list of complaints constantly re-edited by American and Israeli scribes.

Third, a lethargic ‘laissez-faire’ attitude in all media communication matters has allowed Syria’s critics and enemies to spin freely and to paint the country in the worst possible light. Being secure in the self-knowledge that our critics are lying or giving half-truths does not safeguard us from the sting of their active discrediting of all things Syrian.

Fourth, a sporadic and mediocre approach to public diplomacy by various Syrian institutions, inside and outside the country, has possibly done more harm than good, considering that it was the only outlet communicating a Syrian position. This includes exaggerated and outdated communication efforts (in style and in content) by official media and by some embassies which neglected even the most basic of tools, such as the official website.

Fifth, actual infrastructure supporting Syria’s tourism, exports, and foreign direct investment (FDI) are severely lacking, a fact that is not a secret to those considering any of these activities, or to those advising against them. For all our claims that we are ready to welcome more tourists, to export more goods, and to provide FDI opportunities, there is much to improve before that can be done.

With such examples setting the parameters of the challenges awaiting Syria, which has remained impassive for too long, it is clear that action is urgently required if only to keep up with a majority of countries attempting to refine their own image, and embarking on nation branding in a crowded planet.

The urgency facing Syria’s communication needs is itself dangerous, as it opens the door to careless haste when the contrary is needed. Indeed, it will take serious deliberations and strategic planning to go through the necessary process: before we get to nation branding, we need to undo the damage done by years of detrimental coverage and self-exposure. Syria must first and foremost undertake an expert exercise of positioning, or re-positioning.

There are problems with this approach. For one, branding is much easier, and technically more adapted to a situation where time is of the essence, and where a relatively quicker branding exercise may yield results sooner, assuming it is done professionally. One can only imagine how tempting it must be for Syrian marketing enthusiasts to mould a nation brand, rework the slogan and start advertising it through various channels; at this stage of its ‘product life’, however, it is inadvisable to brand before damage control is undertaken.

Indeed, the comfortable clichés, repeated ad nauseam over the years, must be slowly reworked and not simply pasted as slogans over the same old photos. This has been the modus operandi until today, and it doesn’t work. Syria’s multifaceted identity has been lost in a sea of tired slogans and needs redefining: cradle of civilisation, land of diversity, conversion on the road to Damascus, oldest capital in the world and beating heart of Arabism are all still applicable, but they mean nothing to recipients of negative propaganda, or to seekers of less grandiose thrills. Syria needs to stop trying to be everything to everybody and to overextend the range it presents; instead, it must focus on more tactile perceptions and credible associations.

Nation branding is hard enough in a saturated world where most governments have now set up task forces to construct their brand, making differentiation challenging. It becomes much more difficult when branding does not begin on a clean, neutral plate, but rather on a mostly negative footing. This is why positioning is the first exercise needed for Syria, to attempt correcting its image independently, and in comparison to countries considered similar in their culture and history, but without the drag factor that years of negative publicity have created. It will be a long process.

Whereas branding concerns itself with the attributes of the product (or object, service, nation, etc.) as presented, positioning is truly a battle for a place inside the mind of the consumer, the critic or the future supporter. With positioning, one can aim to manipulate perceptions, in the mind of the recipient, through various means, vis-à-vis several reference points. For example, what makes Syria “radical” in the mind of given respondents who find some of its neighbours “moderate”? What makes it “closed” while others are “open”? Or what makes it “rigid” while others are “flexible”? These questions may have an obvious answer to those who already know Syria, but the picture is not so clear for the uninitiated, or the indoctrinated.

Syria needs to choose its message and its messengers carefully as it manoeuvres into a new global positioning; simplicity, subtlety and sincerity are essential. The battle for the mind must be fought on many fronts, and it entails a change of attitude on Syria’s part: we must become proactive in addition to reactive, convincing in addition to self-assured, enticing in addition to picturesque.

A positioning endeavour would be the first serious public diplomacy, international media or communication campaign undertaken by Syria. Many of the required steps may sound like basic textbook tasks, but it would be a grave mistake to underestimate their sensitivity. As we begin to tackle the challenges ahead, it is imperative that we take it one step at a time, perhaps beginning by setting up a Syria Image Management Unit (SIMU), a Syria Positioning Taskforce (SPOT) or simply Syria Marcom Support (SMS). Whatever the acronym, it needs to have the means and the freedom to research, to debate, and to create, and to allow the respective professionalism and dedication of the team members to be committed to an ideal: Syria, the country, as it deserves to be seen.