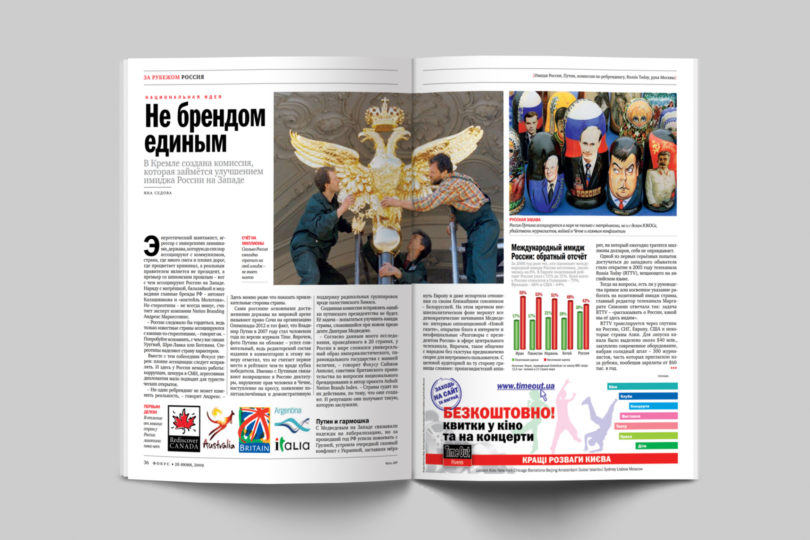 Last week a story appeared on Nation-Branding.info about Russia creating a committee to manage its image abroad when it comes to public diplomacy and foreign affairs. Coinciding with the creation of such organ at the Kremlin, I was interviewed by Yana Sedova, foreign desk editor at the Ukranian magazine Focus, for a story she was preparing for Focus magazine on the same topic. She asked me to share my opinion on Russia’s image and my thoughts about re-branding with a serie of questions. Since the interview was not published in its entirety (it was only a part of a larger story), I thought it would be interesting to release it here.

Mr. Markessinis, what events or actions of the Kremlin government hit and spoiled the Russia’s image during the last, lets say, ten years (top 5 of the most important)?
I think Russia has a pretty bad image because of its behavior. If I had to mention the top 5 most important deeds that have spoilt Russia’s image in the world in the last years I would pick the murders of Anna Politkovskaya and Alexander Litvinenko, the Russian-Ukranian gas crisis, Russia’s stance on the Caucasus conflicts and the creation of the Nashi, the Putin youth. No Eurovision contest can change these hard headlines.

2. With what is Russia associated at present?
Russia is associated on its brand base with the usual suspects: matriushkas, cold weather, the Soviet Union, vodka, tsarist palaces and classic music and literature. More recently and on top of it, Russia is associated with blond tennis female players, mafia, Abrahamovic, an aggressive foreign policy and an authoritarian state.

3. What countries should Russia address first and why?
I would say that Russia needs to improve its image, its brand first to the Western world. Whether justly or unjustly, it has the most power on the planet and its socities are sensible to issues which seem to be ignored by the Russian government like international multi-lateralism, respect for human rights, democracy, transparency and accountability. This has a direct impact on Russia, on Russians and on the Russian economy, as it means few exports, few tourists, few sympathies. Just like the US have improved its brand image with Obama, so should Russia with a more moderate, soft power approach. 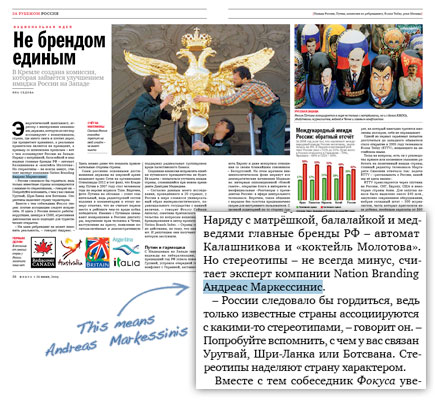 4. In 2005 Russia launched a TV channel that was supposed to positively influence its image in Western countries (Russia Today (RTTV). Was this TV channel a strategically right decision?
I don’t know about the execution, but as a strategic move it looks like a good approach. Other countries, like the UK with the BBC or France with TV5, succesfully use TV broadcasting to export its culture and its point of view to the world. As long as it does not fail to propaganda preassures, it can be quite effective.

5. What stereotypes about Russia will be most difficult to correct?
Stereotypes are not always there to be corrected. Furthermore, some nation branding approaches build upon stereotypes because they are intimate ideas which are widespread and as such they are useful to build over them. In fact, Russia should feel proud of having stereotypes because only famous countries have their own stereotypes, and they account for only 25% of the countries in the planet. No one can mention a stereotype for Uruguay, Sri Lanka or Botswana; these are unfortunate countries. Stereotypes give character and personality to an otherwise faceless nation.

But, if the bad stereotypes could be corrected, I think the most difficult would be alcohol abuse, hostile weather, the power of mafia, an aggressive diplomacy and press censorship, because as long as they are real, they ill be impossible to be erased, no nation branding can change facts – it only gives relief to the most attractive aspects of a country.

6. How can the success of a nation branding project be evaluated?
It can be evaluated in different ways. For instance, South Korea is embarked on a nation branding process and the evaluation will be the country’s improvement on the Nation Brands Index, a sort of ranking of nation brands made by an American market research firm. Other countries use technologies to measure the number and evolution of mentions the country has got on the press and on blogs, and what are the most common and used adjectives associated to the country name, to extract conclusion about what stories is the country most associated with. Other countries look at gross numbers such as the impact on tourism, exports or the country’s GDP.

7. What are the most common obstacles to doing nation branding and what will face Russia first of all?
The most common obstacles are two:
1) petty political agendas: as cabinets have a limited 4 or 5 years-long mandate, most government have not enough time to follow a persistent nation branding policy, which usually takes more years to bring results.
2) lack of coordination among all actors involved: the political class, the agency charged with bringing in FDI, the tourism board, the export associations and the public diplomacy agents.

8. Jacques Chirac used to say “I travel so I could “sell” France”. Is it possible to “sell” Russia and how would you estimate the budget for this re-branding?
Yes, it is possible to “sell” Russia; other countries have opted to manage their reputations, their nation brands, instead of leaving their image to others. But to estimate a budget for a nation branding project for Russia would be impossible; just to give you an idea, a nation branding strategy (not the execution nor the development) typically costs about [undisclosed data] euros, and sometimes it goes up to [undisclosed data] euros.

You can read the print-ready interview here (in Ukranian).