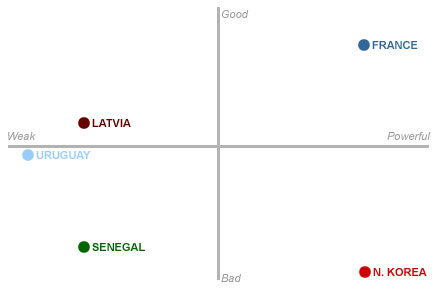 When I read about nation branding on the web, sometimes I realize that some writers tend to use indistinctively “a powerful brand” with “a good brand”, as if they were interchangeable terms. But they are not. “Powerful” describes the power of something (and not the goodness of it), and in the nation branding sphere it defines how consistent and mind-shared a brand (that is, the image of a country) is.

For instance, France has a powerful brand because most people thinks on very similar terms about the country. Additionally, these terms are mostly positive, which means the brand is not only powerful but also good. In other words, that the most common idea about France, that it is refined and cultured for instance, is both agreed and widespread. It is a question of grade: when a large majority of people think very similar things when they hear the word “France”, then we’ve got a powerful brand. France’s brand is powerful because it means similar things to a vast majority of people. There is something like an agreement on what the word “France” means, and that agreement is so extended that it can be called a “quorum”.

To have a powerful brand does not imply that the brand is also good. An obvious example is North Korea. North Korea also has a powerful brand because a vast majority of people associate very similar things to the country (as happens with France), but these attributes are no good: repression, poverty, nuclear threat, lack of human rights. There is another sort of quorum here, and therefore another powerful brand. But a powerful bad brand, to make things clear.

On the other side, Uruguay, for instance, does not have a powerful brand, because it means very different things to different people; to some it is a South American country like Argentina or Venezuela; to others it is… – well, it’s completely unknown. You can’t name not even two things about Uruguay. Uruguay has therefore a weak brand, as it means either different things or nothing at all. Uruguay has a weak brand, as opposed to France and North Korea’s powerful brands.

“Powerful” and “weak” are opposed adjectives; your brand can be either powerful or weak, but can’t be both at the same time. The same happens with “good brand” and “bad brand”. These two pairs of adjectives are on different scales, and are thus compatible. Consequently, you can have a country with a brand which is powerful and bad, like North Korea, and you can also have a country with a brand which is powerful and good like France. But you could also face a country with a weak, good image like Latvia. Few ideas are associated with Latvia, but these few ideas are, even if different, predominantly positive. Then there’s the last possible case, a weak and bad brand. Take Senegal, for instance. Not only nobody knows about it (so it has a weak brand), but the few things you could imagine would be bad (so it has a bad brand).

So, be alert when you read that that country needs “a powerful brand” – that only means that it won’t be weak, but it could very well be either good or bad.