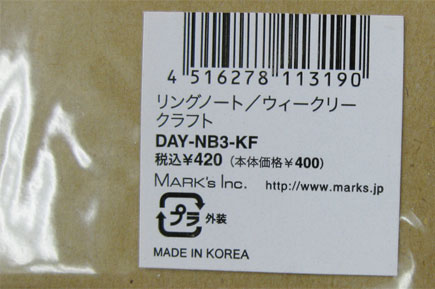 As you know, South Korea is embarked in a nation branding project we have covered in many occasions here. Yesterday, the Korean Presidential Council on Nation Branding released the results of a survey conducted from last November through January – a survey that shows interesting information on how the world perceives Korea and Koreans and is thus very relevant to Korea’s nation branding plans.

According to the survey, which questioned 4,214 adults aged between 18 and 70 in 25 countries, foreigners associate “Korea” with the following images in this particular order: technnology (12 percent), cuisine (10.7 percent), soap operas (10.3 percent), people (9.4 percent), economic growth (6.2 percent), the Korean war (5.4 percent) and North Korea’s nuclear threat (4.1 percent). These are the concepts that come to mind to foreigners when they heard the word “Korea”.

It is the second consecutive year that “technology” has ranked first, the Korean ministry of Knowledge Economy said. In fact, Korean mobile phones were most favored by consumers in 11 countries, followed by home appliances in eight countries and movies/dramas in six countries. The image of Korean food trailed technology, followed by Korean dramas, Korean people, and economic growth. The Korean War ranked sixth in 2008, coming down from fourth in 2007. The North Korean nuclear issue came in seventh, followed by Korean movies, Korean entertainers, and the Olympics and World Cup. 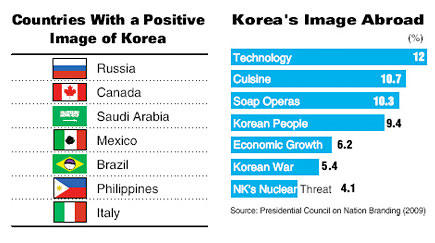 An interesting point of the survey is that when it comes to products, the Made in Korea tagline is still not providing enough value. Consumers in Japan, Germany and the United States still underestimate price value of Korean products and services by more than 30 percent, the ministry said. For example, Japanese people thought a $100 product with a Korean brand label deserved to be valued at an average of $141.6 if it had a Made in Japan label.

The result supports the previous findings of empirical studies on Korea’s national brand and its effect on Korean exports. A Koran brand expert, Han Choong-min, found in his study released in the late 1990s that the selling price of a Samsung wide-screen television set was 20-30 percent lower than the price estimated based on product quality by industry experts on international markets.

The study also found that Japanese brand Sony’s wide-screen television set was sold at 30 percent higher than the price estimated based on product quality. The author concluded people living in neutral countries feel that Japan is more attractive than Korea, and that their perception is reflected in the deep price gap between the products coming from these two countries.

Russians have the most positive image about Koreans among people in 25 countries, followed by Canadians, Saudi Arabians, Mexicans, Filipinos and Italians, according to this poll. The survey found that Koreans, meanwhile, were less popular in the United States, Japan, Germany, Hong Kong and Taiwan.

Respondents to the survey, aimed at assessing Korea’s national brand and image overseas, also said that they gathered information or were informed about Korea by accessing the Internet (18.7 percent), watching television news programs (14.3) and dramas (11.5 percent).