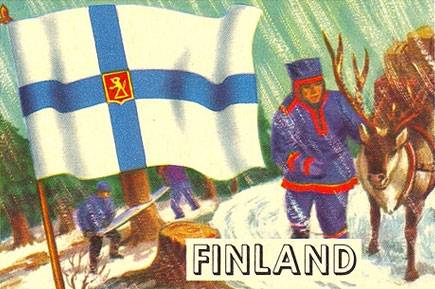 Just like its Scandinavian counterparts, Finland enjoys one of the best country brands in the world. All country/ nation brand rankings show that Finland scores very well in most country brands facets, especially in exports, governance and transparency. But the Finns do not want to lose track and have been working in the last months to sketch up a country image management programme, as Nation-Branding.info reported here.

Finland: Paying Back its Debt and Conducting Public Diplomacy

Finland was one of many European countries that, in the early 1920s, received loans from the U.S. Government. In 1929, a sudden collapse in the stock market triggered the Great Depression, leading to a worldwide economic downturn. All but one country ceased making repayments to the United States. That country was Finland. This period also marked the start of Finnish public diplomacy. Approximately three thousand articles were written in the U.S. about a Scandinavian country in the north of Europe that had repaid its debt to America. Even today, older generations of Americans who lived through the Great Depression remember the story of the trustworthy and honest Finns.

Public diplomacy, as a phrase and paradigm, found its way to the Finnish Foreign Service less than a decade ago. Media relations, cultural diplomacy and exchange programs had all been part of the communications portfolio of the Ministry for Foreign Affairs since the early years of independence; but with the introduction of public diplomacy, the “attempts to manage the international environment through engagement with a foreign public” have become more strategic and focused. “Half of the work of an embassy consists of traditional diplomacy, while the other half consists today of public diplomacy”[1] stated Alexander Stubb, Finland’s Minister for Foreign Affairs last August, at the annual gathering in Helsinki of Finland’s ambassadors.

Soon after, the Foreign Minister appointed a high-level delegation to lead efforts to develop a country brand for Finland. Jorma Ollila, Chairman of Nokia Corporation and Royal Dutch Shell, was invited to chair the delegation. The delegation is charged with the creation of a country brand for Finland; a strong national image that will enhance Finland’s international competitiveness. The appointment is based on the present Government Programme, an action plan wherein the strengthening of Finland’s image is one of the government’s objectives.

The purpose of the country brand is fourfold: 1) strengthen the operating potential of Finnish businesses; 2) increase foreign political influence; 3) promote interest in Finland as an investment target; 4) and increase tourist flows to Finland. The country brand is regarded as a cornerstone for success and prosperity.

As with any national endeavor, the branding project has become a target for skeptics. Some claim nation branding is just another marketing and communications project. Others claim that as a top performer in international comparisons, Finland need not worry about its brand and, therefore, does not require a high-level delegation. Responding to such criticism at a business seminar last January, Jorma Ollila declared that countries which fail to foster their brand could find themselves in the company of North Korea, Myanmar or Zimbabwe.

Furthermore, the Finnish national brand project will rely on hard facts rather than simply a shiny veneer. The delegation’s tasks include defining key strategic selections, networking, raising critical questions regarding content and devising services that will enhance Finland’s prestige, in addition to monitoring and steering the project. The country brand project can thus be described as the first layer of the Finnish public diplomacy concept and a broad framework for public diplomacy operations.

The second layer of Finnish public diplomacy consists of large-scale public-private cooperation among Finland’s main actors on the international scene. Those actors include the Finnish Tourist Board (MEK), Invest in Finland Agency, the Finnish Funding Agency for Technology (Tekes), the national airline Finnair and the Finnish Forest Foundation, among others. This public-private partnership is chaired by the Ministry for Foreign Affairs. Joint public diplomacy efforts include Finnish participation at the Shanghai World Expo in 2010 and “This is Finland” (http://finland.fi). Such cooperation makes it possible for other stakeholders to be informed about and partake in public diplomacy operations if they believe it will benefit them.

For each of these countries the Ministry for Foreign Affairs and its embassies have developed a public diplomacy program. Each program includes an analysis of the operational environment, the status of the nation brand, definitions of objectives, key messages, target groups, tools and, ultimately, an action plan. The Finnish Embassies and Consulates in the above-mentioned countries will receive additional funding from the Ministry for Foreign Affairs to execute the programs.

The action plans of the public diplomacy programs include a variety of activities. For example, in China, an important market place for Finnish products, Finland’s Ministry for Foreign Affairs and the Embassy of Finland will, this year and next, develop a comprehensive website for the Moomin characters in Chinese; present Finnish food safety guidelines for Chinese journalists and food authorities; promote Finnish environmental know-how by planting trees in Beijing; distribute Chinese-language books about Finland to Chinese universities; and administer an exchange program for Chinese civil servants to come to Finland for a month-long training period.

And what of Finland’s debt to the United States? Firstly, Finland received goodwill for decades for repaying its debt to the U.S. Secondly, part of the paid debt was converted into a fund to finance Finnish-American scientific and educational exchanges—the ASLA-Fulbright program. The fund, managed jointly by the U.S. and Finland, is certainly one of the most important and long-lasting investments in public diplomacy. It has opened invaluable contacts and international avenues for many Finnish scholars and scientists in the United States, and many Americans in Finland. It may sound cliché, but nothing beats the joint will of two countries to understand each other.

Finnish public diplomacy makes use of its economy’s shining star, Nokia, whenever possible (just like Sweden does with IKEA, by the way – Editor’s note). For Nokia, a global business, Finnishness in and of itself does not seem to represent any special advantage, although it is not a detriment, either. After all, in theory, Nokia could have been born elsewhere. But the high level of education, especially amongst Finland’s pool of talented engineers, is one reason for the company’s success. The Finns’ positive mindset toward technology has also contributed to Nokia’s success, as have Finnish management culture and values.

Finland, like many countries, has embarked on a nation branding initiative to determine how its brand should be developed, and in which direction. Leading the way in this endeavor is the chairman of Nokia’s Board of Directors, Jorma Ollila. However, one shouldn’t infer that Nokia is seeking a role in Finnish public diplomacy. To be precise, Nokia is always associated with Finland anyway. Rather, it is in the company’s best interest to influence the way the country brand is developed. In this matter, Nokia and Finland have a common interest.

NOTES
[1] From the definition of public diplomacy in “Public Diplomacy: Lessons for the Past” by Nicholas J. Cull. University of Southern California, Los Angeles, April 2007.