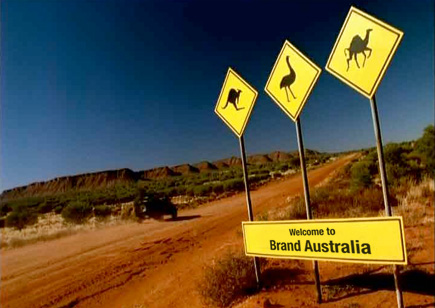 Some of Australia’s leading executives are pushing a new lobby to convince the Australian government to manage its country brand holistically, fearing a drop in popularity of Australia’s nation brand worldwide. Australia was 9th at last year’s Nation Brands Index, and 1st at the Country Brands Index 2008.

According to this lobby’s members, selling Australia with one unified brand will strengthen people’s awareness of the country both as a tourist destination and as a business hub. Lobbists think that while tourism has done most of the legwork in selling Australia to the world so far, there now needs to be a holistic approach which will coordinate the marketing efforts of all Australian businesses, artists, musicians, actors, sportspeople, designers and more, leverage off each other, under a unified Australian brand.

The idea of the Brand Australia Council was first floated in 2004 by the Australian Tourist Commission as part of its relaunch of Brand Australia, but it was never implemented. The Brand Australia Council, with relevant private and public sector membership, should be charged with positioning Australia in investment, export, tourism and international relations. It would articulate what Brand Australia stands for, define and clarify brand behaviours (sporting teams included) and co-ordinate the branding strategy across industries, so it is definetely a task far bigger than one for the National Tourism Organisation.

Ken Boundy, a consultant and former MD of Australian Tourist Commission and Tourism Australia, warns about what a change in media treatment could mean for Australia: “Brand Australia is the way the rest of the world sees us and is a reflection of many factors – from the behaviour of our political and sporting leaders, companies and citizens, to the deliberate promotion internationally of our friendliness and natural assets. In promoting Australia, Tourism Australia has used values like inclusiveness, optimism, candour and originality to underpin their brand development and global positioning of the country. Imagine the disconnect we experienced when issues like our treatment of refugees and Indigenous people become headlines around the world. The perception of authenticity – and ultimately our reputation – quickly diminishes.”

Boundy says that consistency is capital, and that Australia could learn off New Zealand’s model: “Alignment of policies, behaviour and promotion must be consistent. Perhaps the best role model can be found in New Zealand, where there is plenty of room for independent thought and debate, but a strong adherence to positioning the country in a coherent and cohesive manner.”

Tourism side of the brand

Peter O’Reilly, chief executive of Tourism Whitsundays (an archipelago with 74 islands off the Queensland region in Australia), says he is unfamiliar with the new lobbying group but says the idea is a welcome one. “It’s really important to have the brand message out there. It certainly can’t hurt us, and I think what we need more than anything is tactical campaigns because it comes down very much to the value proposition.”

“Australia has a great reputation as a travel destination. We really need to get that tactical offer into the hands of the potential traveler. More brand consolidation and making sure people understand and have awareness is a positive move”, he continues.

Australian Tourism Export Council Managing Director Matt Hingerty was unavailable for comment. However, last year he stressed the need for an international Brand Australia, saying that “while Australia’s tourism brand is performing well on the world stage, we need an overall international brand which can be used by all sectors and industries, including education, manufacturing and agriculture, to enable them to cross-sell each other’s products and services.”

There are critics too, of course. Former Victorian premier Jeff Kennett says the idea of a committee of businessmen advising government on how Australia Inc. markets itself abroad is doomed to fail. “We have more bodies than we know what to do with. We have so many in the tourism industry, all of which I am sure are doing good work but in terms of having established a public or political priority, they have all dismally failed,” he said.

Kennett says that the failure of Australia – and in particular its tourism chiefs – to consistently market the country as a tourist destination is giving him little hope that the idea will succeed. “Tourism would have been given much greater recognition by governments of all political persuasions if they had [succeeded] … there’s no point in having Australia Inc if you can’t have a consistent approach of applying it … We come up with a brand and say everyone has to use it – what then?” he asks.

He goes on to say that Tourism Australia’s recent campaigns, namely “Where the Bloody Hell Are You” and the tie-up with the Baz Luhrmann film Australia were inconsistent and “a waste of money”. Despite Kenneth’s opinion, “Where the Bloody Hell Are You” campaign was one of the most celebrated across the world. On the other hand, while it is true that film “Australia” was boring to death, it depicted Australia consistently on a visual basis (colors, landscapes, people) and did also portray the ambitioned Australian character accurately, showing off the Australian human touch pretty well (humor, adventure, remoteness, authenticity, optimism).

Christopher Brown says that the creation of the Brand Australia Council is an easily affordable project. “Australia is one of the most recognisable country brands on Earth, and the brand has been valued at around £391 billion. In context, the most valuable corporate brand in 2008 was Coca-Cola, valued at £24 billion. Coca-Cola has tens of thousands of people worldwide looking after its brand, but at the moment we are going into the market without a marketing department,” he adds.

Amongst the suggestions for the brand is playing on Australia’s relaxed, laid back, outdoorsy nature coupled with a sense of space. Unlike other cities such as London and New York, Australia offers an uncrowded way of life with a favourable climate and fantastic beaches. Other suggestions included playing on the physical beauty of the country. Chief Executive of advertising agency Leo Burnett, Todd Sampson, says, “The challenge facing Australia now is to find its own space in people’s heads. “Just like Las Vegas instantly means adult playground, so Australia needs to find its own brand”.

The lobby will seek to convince other industries, apart from the tourism sector, to help build awareness of the need for managing the ‘Australia’ . Brown said that while  ‘Brand Australia’  was successful around the time of the Sydney Olympics in 2000, the country is falling behind nations such as India and China in marketing efforts. “We have taken the foot off the accelerator pedal.  The Brand Australia Council is essentially a business development program that is looking at what we can do to better promote Australia”. Eddington and Brown hope to persuade Australian Prime Minister brand of the benefits of the idea before the end of the year.