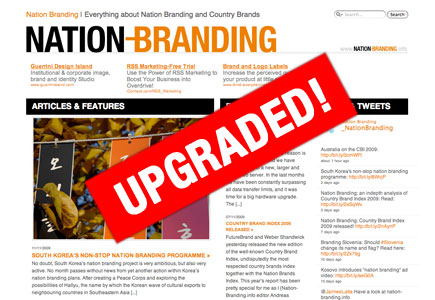 Some of you have reported some problems when navigating this website this weekend. The reason is that over this weekend we have been moving to a new, larger and faster web server. In the last months we have been constantly surpassing all data transfer limits, and it was time for a big hardware upgrade. The new server is capable of serving more pages to more people in less time.

Additionally, coinciding with the move to a more powerful server, Nation-Branding.info has been enhanced with some minor improvements. Besides software changes “under the hood”, the most visible changes are:

– The new News & Tweets column on the homepage will include news about nation branding as always, but now also tweets. This change will allow us to publish more relevant news, on a more frequent basis. It also means that the automated, Google-based system posting of news, which sometimes included news not too relevant to nation branding or news in languages other than English, will work better now.

– Both articles/features and blog posts are now socialized, which means that they are easier for you now to share them in social media/networking sites. Social media websites included for this one-click sharing feature are Twitter, Yahoo! Buzz, Del.icio.us, Digg, Facebook, MySpace, Ping, Reddit and StumbleUpon.

Some minor bugs have been fixed too, but if you encounter anything not working properly, please let me know. Additionall, I’ve been out of e-mail service for a couple of weeks so I’ve got plenty of them unresponded and I am still catching up with them. By the way, from now on please forward your e-mails to nation.branding@gmail.com instead of the former info@nation-branding.info email address. Thank you!!