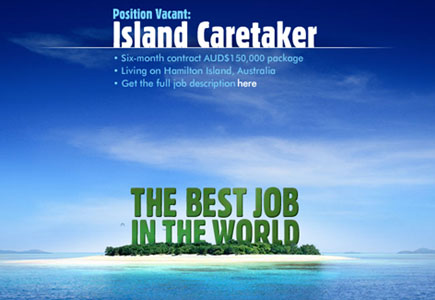 This is certainly not a nation branding specific blog post, but it is a relevant one as it shows countries are beginning to use the Web 2.0 potentials to market themselves as destinations. We had a recent example in Denmark’s nation branding viral video, and other countries and regions are following the trend. Eran Ketter, tourism marketing specialist, writes about how places are resorting to user-generated video contests to engage consumers and prompt them to become digital ambassadors for their brand.

Following the immense success of the Queensland Australia campaign “The best job in the world”, a growing number of cities, countries and tourist destinations are now trying to follow their lead. Mainly, user generated video contests are now becoming popular for two major reasons.

First is the growing popularity of social networks and Web 2.0 platforms; According to Alexa web information company, Facebook is now the 2nd most popular website in the world and YouTube is the 4th, implying of their vast potential to be used as tourism marketing tools. Second is the international financial crisis, leading to smaller advertising budgets and forcing DMO’s to find new, creative and less-expensive ways for promotion. For example, the Tourism Queensland campaign generated US$ 70M of global publicity, while its estimated cost is only US$ 1 M.

These web campaigns follow this method: users are offered to submit a personal video to the competition’s website, from which they can be selected to win a free dream holiday in a TV reality like process. In return, the lucky winners are expected to share their impressions on Facebook, Twitter, YouTube, Flicker and blogs, serving as the place’s ambassadors. By giving out an opportunity to win a free vacation, the place marketers hope to raise awareness to their place, generate free media coverage and promote their public image as a tourism destination. In addition, they intend to create excitement, interest and commitment among the competitors who submit their videos.

Two recent examples for such campaigns are Thailand and Colorado. In the “The ultimate Thailand explorers” (https://www.ultimatethailandexplorers.com), five winning teams will have to explore five locations in Thailand, and inspire international travelers to come and visit the country. In the Colorado “Snow at first sight” (https://www.snowatfirstsight.com), “snow virgins” are offered a 3-month Colorado adventure which includes skiing, snowmobiling and other winter activities.

Although seems easy, launching a successful user generated content campaign is a complicated task. To make it a little easier, it is advised to follow the enclosed guidelines: