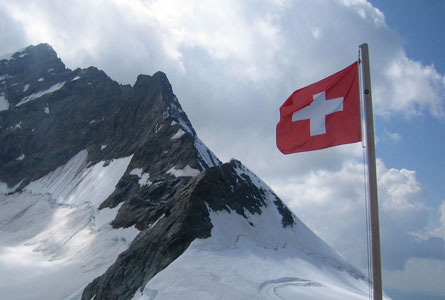 Switzerland is widely admired for its system of government, but is not perceived as having offered much to the world in terms of culture.? These were two of the findings of last year’s edition of the Nation Brands Index, which put Switzerland in eighth position overall – three places lower than in the same study in 2005.

Presence Switzerland (PRS), the official Swiss body whose job is to convey an “authentic image” of the country, published the comments of the authors of the Nation Brands Index on its website on Monday.?? It says it is not worried by the fact that Switzerland had slipped in the ratings.?? “No other country of a similar size is among the top ten,” Mirjam Matti of PRS, told swissinfo. “We see it as positive that our country is taken seriously in the concert of the main nations.”

The survey, carried out by GfK Roper Public Affairs and Media, is based on the answers of 20,000 adults in 20 countries across the world to questions about six categories of national life, including the government system, people, tourism, culture and investment.?? The aim was to find out how the countries in the survey are perceived. The authors of the study point out that this “can make a critical difference to the success of its business, trade and tourism efforts, as well as its diplomatic and cultural relations with other nations”.

“Switzerland is certainly one of a handful of countries that is truly world-famous,” they say.?? “In terms of its economy, quality of life, environment, and above all the admiration for its people and its products, Switzerland’s “brand” is truly a global one.”

In fact, Switzerland got its best ratings from respondents living outside western Europe. With the exception of Germany, who ranked it second overall, the other four western European countries surveyed put Switzerland in 10th place or lower – with the Swedes particularly unimpressed, ranking it 16th.

The study found that 46 per cent of the Germans surveyed had Swiss friends or acquaintances, which might have given them a positive exposure to the country. Conversely, only 17 per cent of the Swedes knew someone there.

Matti said that PRS already knew from other studies that Switzerland gets the most positive ratings from the most distant countries.??”Countries which are far away often have very clichéd ideas about our country, and since our clichés like mountains, chocolate and watches have positive connotations, our image in these countries is often very positive too.”

“But we have also found that our neighbours often don’t know us as well as they think they do. For example, comments by Austrian journalists after they had been on a study trip to Switzerland showed that they had had quite a different idea of Switzerland before their visit, and had been surprised at all the things they had learned about their unknown neighbour.” The compilers of the survey surmise that Switzerland gets more media exposure among its neighbours which could damage its image.

Switzerland came out top in the category of governance, narrowly beating Canada into second place. The authors noted its system of direct democracy, its effective welfare state and its neutrality as contributing to its high standing in this area.

The commentary attributed Switzerland’s relatively poor showing in culture, where it ranked only 18th, to the fact that it lacks both a major cultural heritage and has not produced any towering writers, artists or musicians. Nor is it perceived as having a strong presence in contemporary culture. In the culture area it did particularly badly for sport.

The study picks out three areas – environmentalism, technology and education – where a country’s reputation has become critical in recent years. It notes that Switzerland scores well in all of them, but warns that it must monitor them closely.

The study also asked respondents for their overall personal impression of each country. In all the countries, Switzerland came out above average, with people in Russia having generally the most favourable impression – and those in Sweden the least.