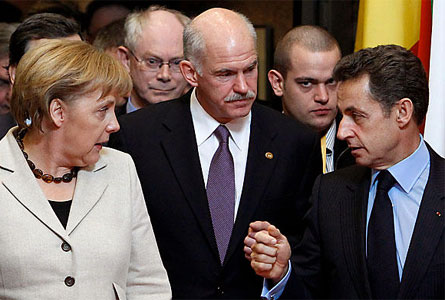 Like Iceland, Dubai, Latvia and a few others before, the relatively small country of Greece has been on the eye of an economic storm recently. Its economy has been put in doubt, its stats have been questioned, and the nation as a whole has been given a cold shower of realism and humility.

Greece is facing a major, world-scale credibility crisis, and that has its effect on Greece’s overall image, i.e. Brand Greece. Brand Greece may stay strong on some soft aspects like tourism, history and culture, but it is probably suffering a measurable decline on all economy and business facets following the hedge funds turmoil.

I should wait to see some perception metrics reports and country reputation indexes to see whether these headlines are having an effect on the country’s economic equity, but most likely Greece’s ability to draw inwards investment or attract talented migrants has been wounded to the bone.

Greece is yet to go through the storm, and it won’t be easy, but countries which have gone through it are now starting to re-brand themselves (we had earlier mentioned the need of countries in a similar position to Greece such as Ireland or Dubai to re-think themselves). Iceland, for instance, is planning to become a global haven for freedom of speech.

The Nordic country has abandoned its ambition to transform itself from a country heavily dependent upon fishing into a financial powerhouse, after its plans went up in smoke after the 2008 credit crunch, and is now looking for another ways to position itself in the new, post-metdown scenario.

Iceland intends now to becom a bastion for global press freedom under a package of laws proposed by opposition MPs to defend freedom of speech, and protect sources and fight libel tourism. The initiative has been met with enthusiasm, the Icelandic Modern Media Initiative website claims.

Greece is aeons away from Iceland, and not only geographically. Being myself Greek by father, I feel a deep pity for a country which has put itself in such a bad position.

Some will say there are ‘speculators’ behind the attacks against Greece, and there are many of them of course, but we Greeks alone are responsible for having made our country’s economy vaporous, for turning our economic weaknesses into candy for speculators, for having clientelism at all levels of the country’s State apparatus and for having a gigantic, unefficient and absurd Public Sector, among many other economic sins.

On top of that, it turns out now that we have have been consistently delivering false stats to Brussels. This is probably the most humiliating part for any Greek with some sort of self-esteem. For God’s sake, this is a country that needs a major change in how it operates internally and externally.

It seems that Greek prime minister George Papandreou (pictured above, between Merkel and Sarkozy) is taking valiant measures, and that some of these measures, however harsh they might be, are gaining qualified support by Greeks. A recent survey showed that Greeks, after watching their prime minister speaking on TV, are at last very concerned about the state of the economy, and that they support the prime minister’s plans to cut the supplementary pay of public servants, to freeze hirings in the civil service and to rule out any pay hikes for bureaucrats for the time being. Of course, there are the large numbers of strikers too.

If Greece makes things properly, this crisis could be a great chance for the country to change for good. The country, the nation and the state really need to re-think themselves, re-design themselves and re-activate themselves.

Additionally, it could be an opportunity to show off that the Greeks’ registered trademark for resisting and overcoming major natural and human disasters is still a reality in Greece. Because we need to resist this embarrasing episode and change the country to change how we are perceived.

The strength necessary to keep our country alive for 4,000 years, the commercial prowess of the Greeks, the legacy of democracy, humanism, arts and logic, the love for freedom, the impressive shipping industry – these are the things Greeks should we known for, not the other ones.

But’s it is all up to us. We’re known now for cheating, for living above our possibilities or for having a political elite which ammassed a gigantic debt. It’s Greeks’ responsability to use this grim situation as an excuse for real, real change. And perceptions will follow.