There is one country south of Russia with a dire need of re-branding. This country has nearly 50 million people in it and is roughly as big as France, but the country has little influence, little attractions, lttle fame, little everything.

That country is Ukraine. To complicate things more, of the few things known about Ukraine, most of them aren’t too good. Once famous for its massive production and export of agricultural goods (it was once regarded as ‘the breadbasket of Europe’), now its most famous exports are Chernobyl and uranium trafficking.

Ukraine’s image is pretty bad, mostly because the country hasn’t taken much care of its reputation nor has launched good stories from the country to the world. So the country’s image has been mostly shaped by the the media, which is usually interested in the worst kind of news. Additionally, when the media is not looking, not approaching your reputation proactively creates an image vacuum which, as there are no other alternatives at hand, is filled with the typical and usual, generalizing former Communist imagery.

As a result, the image of Ukraine internationally is that of a grey, cold, poverty-stricken, backward, alcohol-ridden, desolate former Soviet republic in Eastern Europe, even if it’s been nearly 20 years since it gained independence from the decrepit USSR. Its image in 2010 to the world’e eyes is pretty much the same as the one it had in 1991.

In the same 20-years timespan, I witnessed first-hand how Spain changed its image from a backward, pariah state under Franco in 1975 to a modern, uncomplexed and succesful country in 1995. It hosted a World Cup, the Olympics, a World Fair, world-class cultural events, it had entered the European Community and the NATO and had revamped completely its image from conservative to liberal, from traditional to modern, from authoritarian to creative.

Besides football player Andriy Shevchenko and the Ukrainian triumph at the Eurovision song contest in 2004, Ukraine had its own PR golden opportunity during the so-called ‘Orange revolution’ in the same year, which put Ukraine on the map for a month across the world. It provided an unprecedented opportunity to improve the image of Ukraine and even of Ukranians themselves, since the spirit of the revolution was one of a civilized, civic and democratic protest with a beautiful aesthetic background. Some media analysts estimated that Ukraine would have needed to spend $10 billion for such wide publicity in the world, but the country wasted its chance to make the most of that attention.

Ukraine needs to define itself and streamline its country profile. It must declare what it is, what it stands for, and how does it introduce itself to the world. To use marketing jargon, this is about positioning itself, because the fact is that Ukraine has not yet established a position in the mind of the global consumer by its own initiative. Its positionment is only the result of a lack of a proper bearing – a clear direction for the country to navigate to.

A strong brand often is narrow in focus and owns something in the mind, but Ukraine hasn’t its own place in the consumer’s mind – its place is shared with  others like Belarus or Moldavia in a melting pot of generalizations. So the things Ukraine must answer to get its own place in the consumers’ minds are: What does the country stand for? Is it a country for sunbathing? Is it a country for offshoring services there? Is it a cheap labor country? Is it a rogue state? Is it a country yet unexploited with a mass of market opportunities? Is it a country with a rich culture or history? Is it a gas and oil proxy country? What is Ukraine beyond being a country? What kind of images should come to mind when someone says “Ukraine”? What kind of images should replace Chernobyl and Ukranian wife scams when we hear “Ukraine”?

Ukraine should define itself, find a national theme, tell stories about itself in a consistent manner to build that image by its own initiative. And it must do it by itself because, unlike countries like Ireland with Guiness or Finland with Nokia, there is no Ukranian leading brand that could become an ambassador to the country’s nature and/or abilities. The country needs to establish its nation brand in the world’s mind on its own.

To build up its country brand identity, Ukraine must look at its strengths. No need to say that, like all countries, Ukraine has its own share of strengths. The problem is not that it lacks them, but that these strengths haven’t been articulated in a comprehensible, coherent and consistent discourse. They haven’t been assembled altogether into a national story. And that’s why the country drowns in a prejudiced post-Soviet image – these fragments do not build up a new image strong enough to replace the former image.

Of course, one can argue, and quite rightly so, that with its turbulent recent history, Ukranian elites haven’t had the time and concern to brand the country properly. There have been far more immediate challenges to face. That is understandable, but one should bear in mind that unless the government takes the initiative to take hold of its reputation, the country will be stuck in a vicious circle. The country has bad image and so it can’t prosper, and as it doesn’t prosper it doesn’t acquire a better image. 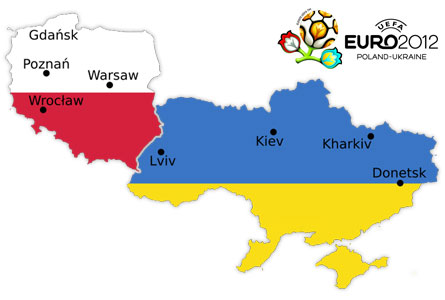 Luckly enough, things may start to change in two years time. Together with Poland, Ukraine won their shared hosting bid for the Euro 2012 football championship, which will put the country on Europe’s spotlight for around one month. Ukranians should use the event to introduce their country to an ignorant and prejudiced world. They need to streamline its profile clearly: what has changed in the country since the last time the world looked at it, what’s Ukraine’s new role in the world, why should one come to the country, what can one expect from the country, and so on. Ukraine needs an identity, a profile, a simplified roadmap for those looking to understand what kind of a country and people they are watching.

The one thing that Ukranians should be aware of is that unless a proactive approach is taken by the country, things will remain the same and Ukraine will remain a “terra incognito” for the average world citizen, ready to be poured and filled with stereotypes. As a result Ukraine will continue to be thought of as a great black hole between Russia and the Black Sea. A big country, but a small nation brand as seen from abroad.