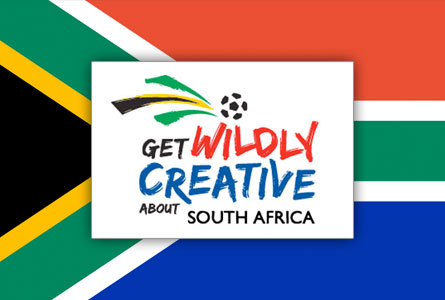 The 2010 FIFA World football Cup is to be hosted by South Africa and it is just 100 days away. To promote the country, the CMO (standing for Chief Marketing Officer) Council and the International Marketing Council of South Africa have teamed up to launch a crowdsourced advertising contest, by the name Get Wildly Creative About South Africa, inviting people to dream up great ways to promote this colourful African country.

The International Marketing Council of South Africa, which is responsible for defining and shaping Brand South Africa’s image throughout the world, has launched this 8-week, people-inspired, online-based ad contest, opening March 15, as a part of a major nation branding research project.

With social media networks hosting billions of monthly visitors, conversations and connections, this initiative will evaluate the level of voice, influence and creative pull in these interactive online communities, particularly as it relates to shaping perceptions of countries, destinations, locations and origin of products, specifically those related to South Africa.

The ad contest will be hosted on the Zooppa.com people-inspired advertising platform and will use viral communications, online conversations, blog postings and cyber chatter to talk up interest and participation in this pioneering country branding program, which targets the world’s 1.7 billion Internet users.

Current and aspiring creative professionals, digital media buffs, South African citizens and expatriates, and anyone with a lust for travel to Africa, are invited in this contest to come up with inventive ways to produce a fresh and evocative message about a country that has gone from tragedy to triumph in less than two decades. Contest entry information and a creative brief, along with links to South African-related resources, are available at the Zooppa.com contest center.

From a nation branding perspective, it is interesting to notice that the brief explains that the ad contest “is not just about selling South Africa as a great place for a holiday or a conference, though with its game parks, vineyards, beaches, breathtaking landscapes, warm and engaging people and their unique blend of cultures, the country is certainly that.

Nor is it simply about trade and investment promotion though, again, South Africa as Africa’s biggest and most stable economy has plenty to recommend it on that score as well: sophisticated and well-regulated capital markets, sound economic management that focuses on long term growth rather than quick, populist fixes, first-rate infrastructure and communications, and entrée to emerging markets and developing countries in the rest of the continent.”

The brief states that the aim of this country branding exercise’s objective is overarching: “To imprint on the minds of decision-makers, opinion leaders and trendsetters everywhere – the target audience – an image of South Africa as a desirable and distinctive place to visit, conduct business, invest, source products, services and ideas, host gatherings and experience a unique, unrestrained blending of cultures and hospitable, friendly people.”

This last point about “defying expectation and stereotypes” is noteworthy. It is very nice on the part of the South Africa’s nation branding leaders that they have no complexes talking about existing negative cliches towards South Africa. In fact, the brief acknowledges that:

“In the run-up to the FIFA World Cup, there has been a steady, though latterly decreasing, drumbeat of concern that South Africa is somehow not up to hosting the world’s most popular sporting event safely and efficiently. This concern owes a great deal to stereotypes about Africa [See Nation Branding for African countries for more information on this continent halo effect]. A successful World Cup, it is hoped, will do much to lay such negative assumptions to rest.”

Personally I think it’s very nice and honest to say things just like they are – Kudos for South Africa’s nation branding masterminds.

Cash and prizes will be awarded to the top submissions within each category including Best Print Campaign, Best Online Banner Campaign, and Best Video Segment or Commercial. Winning entrants will have their work showcased globally to the council’s 5,000 members who control more than $150 billion in annual marketing spend and recognized at a special IMC-hosted reception in New York City, the world’s media center and creative hub. They will also win trip packages courtesy of South Africa’s Tourism Board and other travel, hospitality, lodging and merchandise partners in South Africa.

“We’re looking for inspired messaging and out-of-the-box advertising executions that capture and convey the essence, attributes and qualities of Brand South Africa,” noted Donovan Neale-May, the executive director of the CMO Council, who pointed to the country’s growing tourism, trade and economic development success.

“With the world’s eyes upon it as host of the 2010 FIFA World Cup, South Africa is seeking to establish itself as a competitive and relevant nation brand,” added Paul Bannister, CEO of the International Marketing Council of South Africa. “We’re excited about the potential for social media channels to generate greater discourse and narrative about our brand from people who have experienced or researched our special place in the world.”

Separately, the Council will be conducting monthly analytics on the tonality, sentiment and prevalence of conversations, commentary and news about Brand South Africa leading up to the four-week FIFA World Cup event, starting June 11. It will source PR Newswire’s Social Media Metrics service, which tracks the tonality and sentiment of global media coverage through 30,000 online news sources in 12 languages. The platform also intelligently agents and analyzes five million forum posts a day, as well as conversations and commentaries in 20 million blogs, social media networks, news groups, bulletin boards, etc.

With billions invested in this year’s Africa sports spectacular, the CMO Council will be looking at South Africa’s effectiveness in shaping perceptions and using the global football spectacle to optimize its reputation and appeal worldwide. Key determinants of South Africa’s nation branding value creation will be effective message management and clarity of brand positioning relative to the visitor/player experience, global media attention, and viral online community conversations and content sharing.