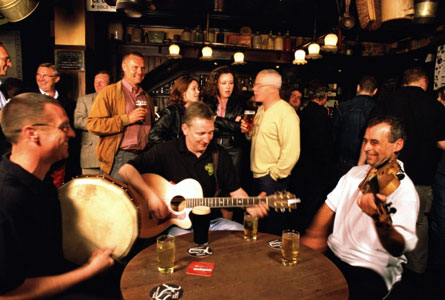 Ireland is on the spotlight lately from a nation branding perspective, and not only because of its beautiful green fields and good beer. The country has gone financial turbulences in the last months, and the country is in a process of re-thinking itself. This is a process other countries like Greece, Iceland and Dubai, which have undergone a credibility crisis, are also approaching, some with more determination than others. In the Irish case, plans to launch a new website to protect Ireland’s brand image were recently announced, and nation branding expert Simon Anholt was invited to deliver a keynote speech on ‘Brand Ireland’ at a seminar in Dublin last month. Now, an article by Mary Lambkin, professor of marketing at Smurfit Business School, University College Dublin, pinpoints some of the issues under Ireland’s nation re-branding.

The main theme to emerge from the Global Irish Economic Forum last September was the need to refocus and refine the brand Ireland projects to the world market. A new “playbook for the 21st century” was required, according to the forum’s report.

The recently published Innovation Taskforce report picked up on the same theme. It proposed developing a single national brand identity based on the concept of innovation, to be used consistently by relevant agencies in their promotional efforts.

The acceptance of the importance of a single, clear brand identity is to be welcomed as is the acknowledged importance of an active, integrated marketing campaign. But the concept of Brand Ireland means different things to different people and sectors: we are a long way from a single, coherent, unified brand in the sense implied by the Farmleigh participants.

Some of the issues branding and marketing professionals might typically consider in the context of nation or country branding are set out below, in an effort to offer a fresh perspective to contribute to the debate on the future direction of Brand Ireland.

The idea of treating countries or nations as brands is not new but has gained currency in recent years as competition for tourism and investment has intensified among the developed nations and, even more so, as emerging nations such as India and China have become serious challengers in the global market. Terms such as “nation brand”, “country brand” and “place brand” are now common and a minor industry has grown up in designing, managing and measuring nation brands.

Futurebrand popularised the idea of country brands. The company tracks the perceptions of around 3,000 international business and leisure travellers from nine countries to compile their annual Country Brand Index (CBI). The idea of the index is to establish where a country currently stands and this information can then be used to identify attributes upon which to focus – strengths to build upon, weaknesses to be corrected and knowledge gaps to be filled.

The US topped the index last year and New Zealand ranked fourth, while Germany made the top 10 for the first time ever. Ireland has yet to make it into the overall top 10 but we have featured in the top 10 for about a quarter of the individual variables measured in the survey.

Predictably enough, the highest ranking is for the friendliness of our people (2), but we also do well on natural beauty (6), desire to visit or visit again (6), like to live there (8), families (9), and rest/relaxation (10). In contrast, we do not feature at all on variables such as fine dining, outdoor activities, nightlife or, more surprisingly, history or arts/culture.

In terms of business, we feature in the top 10 for four out of 12 variables compared to the UK, which features in five. Our best scores are for being easy to do business with (5), a good place to extend a business trip (5) and a preferred destination for conferences. We rank 10th as a new country with which to do business.

We do not feature at all under advanced technology or high-quality products: there is much work to be done if Ireland is to build its brand as an “Innovation Island”. This finding is consistent with the European Innovation Scoreboard in which we ranked 9th among the EU27 countries last year and the year before.

Will the real Brand Ireland please stand up?

Talking about Brand Ireland or any other country brand implies it is a single entity – but countries have so many constituent parts. The Irish State is represented by a kaleidoscope of images and logos with no common thread among them and an inconsistent standard of design and execution.

At the top of the hierarchy for Brand Ireland is the Presidential Standard, a gold harp on a blue background.

The Oireachtas introduced a new corporate identity in 2008, an update on the traditional symbol of the state – the harp – with a more stylised version set within concentric circles.

This new identity bears no relationship to the national standard, either in colour or form, nor has it been carried through on the official government website, which has the harp but uses a different style and colour scheme.

In Government departments, the brand architecture really breaks down. Each department has a different visual identity, varying in colour, style, language (Irish versus English) and every other aspect. Collectively, they look chaotic.

The harp, a central symbol of Irish nationhood since the foundation of the State, features in the identities of some departments but has disappeared from others. The Departments of Health and Children and Social and Family Affairs have abandoned the harp completely and other departments have re-interpreted it in various ways.

State and semi-State agencies have also played fast and loose with the harp and shamrock. IDA Ireland and Enterprise Ireland have completely different logos and identities, neither of which has any obvious connection to Ireland or to each other. The Industrial Development Agency’s logo is tired and faded; the angular emblem, suggesting something about scientific activity, clashes with the old-fashioned typeface used for the word Ireland. It seems an unnecessary complication to have two separate agencies with unconnected identities representing the single subject of enterprise/business.

Similarly, having two organisations with separate and dissimilar identities representing tourism makes no sense from a branding point of view. In both cases, the shamrock is used as the core image but it is treated differently in each case. The same could be said of other state and semi-state agencies operating in this country: our national branding is in a chaotic state.

A new direction for Brand Ireland

Marketing and branding people view the current array of identities within the Irish state sector with dismay. Core symbols such as the harp are being interpreted any which way: some investment of effort to decide how to use these symbols in a unified way would repay itself in spades.

New Zealand has become a role model for other countries in this regard. Starting in 1999, it launched a campaign with the slogan “100% Pure” in all of its key markets for trade and consumer events, advertising and marketing. The original targets for the campaign were tourism, farming and dairy, but the government soon realised its shortcomings in marketing information technology and next-generation industries, which gave birth to the follow-up slogan “New Thinking New Zealand” in 2003.

Incoming visitors increased 53 per cent since the 100% Pure campaign kicked off and the New Thinking New Zealand efforts substantially increased exports. New Zealand came fourth in the Futurebrand top 10 nation brands last year, behind major players such as the US, Canada and Australia.

There is much to be gained by investing time and effort in developing Brand Ireland, and more to be lost if our competitors around the world steal a march on us. The task for our government is to chart a new direction for Brand Ireland and to choose images and designs to reflect our desired identity.

The first task is to set up a Brand Ireland steering group to manage the branding project and co-ordinate its implementation. Ideally, we should end up with one summary message that transcends all the individual sectoral interests, but one that can accommodate the individual sectors in such a way as to complement and reinforce each other, generating positive synergies rather than acting completely separately.

A good example is the obvious connection between our high rankings in friendliness and in being easy to do business with. Also, the desire to visit and/or live here seems positively related to attending conferences and extending business trips. These “people” variables offer one strong and unique platform upon which Brand Ireland could be built.

Punching above our weight

The next thing we need to do is choose the symbol or symbols to represent Ireland – the harp and the shamrock being the obvious candidates – and commission designs and styles to illustrate them. (An international competition would be an interesting way to do this.) Once a design is chosen, a brand manual would provide guidance on how the design should be applied in all settings – government departments, semi-States, etc – with no deviation allowed. This is standard practice in the corporate world to ensure a consistent representation of logos and livery all around the world.

This new design would then have to rolled out through the public sector and incorporated in all communications, from letterheads to application forms, to buildings and vehicles, advertising and websites. This would be a huge logistics exercise but it could be done and could rekindle a sense of pride in our country and in our institutions.

Interbrand, a leading brand consultancy, a few years ago said Ireland and Scotland were widely acknowledged as having created country brands that punch far above their natural weight. They were seen as small, cocky fighters who used the illusion of an enduring enemy to create a strong brand identity for themselves as the underdog. Ireland also enjoyed an enormous surge in popularity on the back of multiple Eurovision song contest victories, as well as shows such as Riverdance and bands such as U2. Guinness helped, too, as the quintessentially Irish brand that feeds Ireland’s reputation while, simultaneously, Ireland – the nation brand – feeds it.

These positive images and reputation have been dented in recent times, and we still run the risk of being corralled into the same group as Greece and Iceland because of our financial problems. But we have a strong base of awareness and visibility around the world and it should be possible to refresh and recover our reputation with attractive branding and communications.

A major rebranding of Ireland with fresh visual imagery could play an important part in signalling to the world that we are embarking on a new era in how we conduct our business affairs – and leaving behind the legacy of past mistakes.