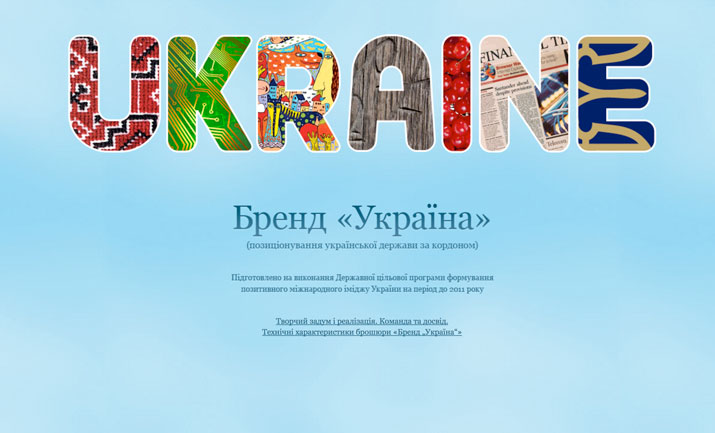 The Ukranian Ministry of Foreign Affairs has launched a new nation branding identity for Ukraine.

The accompanying website, BrandUkraine.org, features the main elements of the new Ukranian brand identity, from logos to images, and from color palettes to ornamental shapes. The website, however, has been criticized in Ukraine because of its non-obvious navigation pattern and the site’s low loading speed.

Critics have also pointed out that the website, which aims to improve the country’s image abroad, lacks an English-language version. But CFC representative Alex Sivak explained that the website has been developed for Ukrainian state institutions. ‘This was decided by the Ministry of Foreign Affairs itself, as it ordered an Ukrainian-only version of the brochure, and also an Ukrainian-only version of the site’, he said. ‘But we’re determined to post information on the site in other languages too, primarily in English’, he concluded.

The branding effort also includes two cartoons, allegedly named Sprytko and Harnyunya, which have been designed in the Japanese anime style – with big eyes. Apparently, Sprytko is active and daring, while Harnyunya is beautiful and independent. Such is the way, the designers say, Europeans should think of the Ukrainian people.

According to Ukranian media, CFC Consulting confirmed it was paid US $100,000 to conceive and design Ukraine’s new brandmark. The Ministry explained that, comparing it to the budgets of Qatar or Kuwait, the investment was ‘a drop in the ocean’.