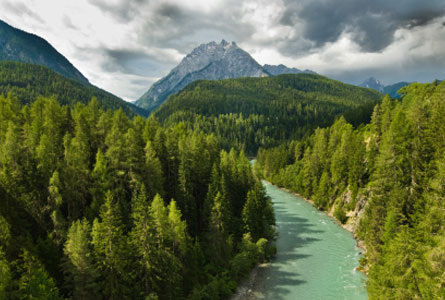 Canada should redirect attention from the beauty of its nature to the beauty of its Six Cs – read on to find out what they are. With the G8 and G20 meetings about to begin, the attention of the international media will inevitably, if fleetingly, focus on Canada. What kind of impression might be conveyed? Which of these should be Canada’s national brand?

For journalists prepared to eschew the backdrops, sound bites, and briefing books, and venture beyond the sterile secure areas, there may be a few surprises. Even the least intrepid would soon discover that in a world of well-established, pre-packaged national identities, this country is different.

That difference has little to do with beavers or moose, with the cold climate or the scenic attractions. It is not the place. It’s the people. No matter where you’re from, if Canada were a mirror, you would see your own face reflected. And because everyone is here, no one stands out.

It is one thing to remark upon Canadian multiculturalism, but it is quite another to think through the larger implications. Immigration, buttressed by trade, travel, tourism, and technology, has transformed Canada from a marginal remnant of rival empires into an open-ended possibility, a work in progress in which change and accommodation are constant.

After almost 150 years, Canada has become a state – of becoming.

There is something inherently exciting about looking forward rather than gazing back. Yet for some, especially those with a lingering attachment to the notion of a bi-lingual, bi-cultural, “true north strong and free,” being part of an ongoing demographic experiment may seem a little unsettling. Be that as it may, the old verities, however comfortable, no longer fit.

It’s not just that over one half of Toronto residents, for instance, were born somewhere else. Recent public opinion research also suggests that coasting on an outdated reputation has begun to erode Canada’s credibility abroad. It is time to move on – or face the consequences.

That said, the risks of inaction pale in comparison to the possible gains on the upside. If some innovative thinking were harnessed in service of Canadian objectives in the high-stakes world of international affairs, a coherent effort to project a more contemporary mix could pay handsome dividends.

Many countries have the coercive power associated with armed force, but that will never be Canada’s strong suit. Nor should it be. This country’s comparative advantage lies elsewhere – in the diverse make-up of its communities, in the souplesse of the social fabric, in an unthreatening demeanour and a willingness to be helpful.

In terms of trade and investment, this country has among its citizens people with the language skills, cross-cultural acumen, and business savvy necessary to penetrate promising new markets of any description. When it comes to the complex balancing and knowledge-based, problem-solving skills required for mediation, negotiation, and compromise in conflict resolution, Canada is similarly well-equipped.

With a generally benign image, little historical baggage and an open, approachable temperament, the prospects for successful engagement in genuine dialogue improve. In other words, because the idea of Canada usually evokes a smile rather than a scowl, people will talk to us. The same positive predisposition is not always displayed towards those with a colonial past or imperial present.

Even with a pretty good hand, however, branding a nation – which is to say, a country and its people – is complex and immensely difficult. Nation brands are formed over time, and are best not based on postcard stereotypes.

Several years ago, the president of a leading New York PR firm screened a visually stunning slide show of mountains, lakes, forests, and wheat fields at a branding seminar organized for Canadian consuls general in the U.S. “Canada sure looks nice, eh?” said the Madison Avenue guru. Heads nodded sagely. “Trouble is”, he continued, “these are pictures of Wyoming…”

With a few exceptions – say, the Matterhorn or Percé Rock – the problem with an over-reliance on the great outdoors is that rocks and trees are largely generic. An effective brand is not about what you look like or say. It’s about what you do, who you are, and how you act. That kind of brand is unique and differentiating. It conveys both emotional appeal and a clear value proposition.

Many countries rely mainly on exhortation, proclaiming support for values such as democracy and respect for human rights. When pronouncements and behaviour do not align, however, a perilous “say-do gap” can open like a yawning chasm. As more than a few major players have learned at some cost, even the best communication practices can never compensate for fundamentally flawed or contradictory policy.

Canada’s strength, and the source of any potential influence, emanates not from the loudness of our voice, the comeliness of our landscapes, or the power of our weapons. Instead, this country’s appeal resides in the openness, generosity of spirit, and outward orientation of Canadians. That attraction is cultural, and it is embedded in the population rather than in politics or public administration.

There has never been a coordinated, concerted attempt to construct or promote a distinctive Canadian brand. The branding potential associated with Canada’s wealth of human resources is almost completely untapped. It is time to put the capacities and qualities of Canadians to work in the world.

To start the conversation, I would propose the elaboration of a nation branding strategy informed not by the beauty of our nature, but by the nature of our beauty. The thematic framework could be christened Canada’s Six Cs: Creative, Competitive, Connected, Cosmopolitan, Civic, and Caring. These features are current. They are demonstrable. And their provenance is neither partisan nor corporate.

With vision, leadership and support as pre-requisites, the active management of Brand Canada could usefully become job one for Canadian international policy.