Monocle magazine has in its September edition a special feature on ‘rebranding Britannia’. For those who don’t know, Monocle’s editor in chief is the flamboyantly punctuated Tyler Brûlé, former Wallpaper founder and columnist at the Financial Times – a style icon and a trendsetting guru.

As Brûlé himself explains, ‘For our September issue, we’ve decided to give Britain a Monocle makeover. With the help of leading thinkers, brand experts and academics, we look at how the sceptred isle has lost its lustre and what Britain needs to do to become ‘great’ again.’ 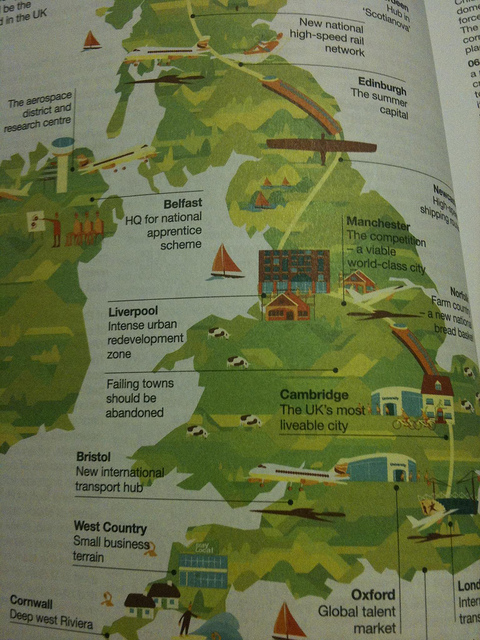 According to Monocle, ‘Great Britain hasn’t seemed quite so great in recent years’ because its image has been damaged by unpopular wars and the banking crisis. The country, which additionally is sometimes “popularly associated with official pomp and pageantry” as the Monocle copywriters say, needs some re-thinking. For this reason leading thinktank heads, architects, foreign correspondents, cultural figures and branding experts have been called to scrutinise what the once “great” Britain needs to do to reinvigorate its “broken” image, and rule the waves once again.

In its sketch, Monocle suggests among other things turning Edimburgh into the country’s ‘summer capital’, branding Bristol as a ‘new international transport hub’ and overhauling Liverpool’s area with new urban redevelopment as well as abandoning failing towns in the Midlands. See map above. For the city of London, the authors expect the City Hall to have fulfilled its promises to transform the metropolis from lurching anachronism into the true, rightful capital of the world.

Monocle and its chief editor are not newcomers to the nation branding field, as they touch the topic from to time. In September 2007 the thickly packaged magazine included a country branding special report with contributions from experts such as Simon Anholt and Wally Olins among others. Warning: you should not expect any serious, indepth nation branding exercise – this is just a divertimento in a style magazine.

You can look at the contents of the Monocle September issue here.