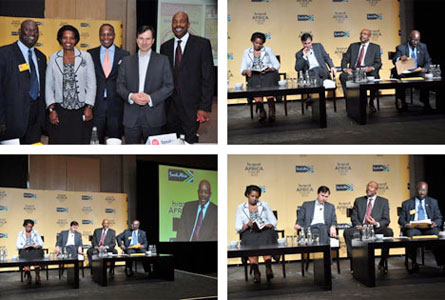 Something’s going on in Africa. Just a few days after a summit was held in Accra to explore a country brand identity for Ghana, another large-scale nation branding event took place in the continent, this time in Johannesburg, South Africa.

Over 300 representants from the African media, business and political leadership, together with nation branding experts and executives, gathered on Thursday for the inaugural Brand Africa Forum 2010. This new African initiative aims to harness the collective African and global wisdom and experience to drive the continent’s reputation, image and competitiveness.

“Brand Africa is an initiative for Africa by Africans, who are confident in and passionate about Africa. It’s about Africans proactively taking charge of their destiny to build a better Africa for investment, exports, tourism and citizenship,” said leading brand authority and founder of the initiative, Thebe Ikalafeng.

The Forum reflects on the positive impact of the 2010 FIFA World Cup and chart a way forward to manage Brand Africa – a positive image and reputation to enhance the continent’s competitiveness.

“The African story, like its history, has always been left to the world to interpret and shape. However, this forum is distinguished by the fact that it focuses on Africa, not as a topic, but as the agenda,” he said.

Nation branding expert Simon Anholt was one the keynote speakers among a line-up of 14 international guests, including Dr. Irvin Khoza, Chairman of the 2010 FIFA World Cup South Africa Local Organising Committee. Speaking of Africa’s brand in the global marketplace, Anholt has said: “Brand Africa, with its simple message of ongoing catastrophe, is promoted by aid agencies, international organisations, donor governments and aid celebrities like Bob Geldof and Bono … not as 53 countries in various stages of development and struggle for independent existence and identity, but as a uniform, hopeless basket-case”.

It is this image of Africa, which fails to reflect the continent’s economic diversity, and the optimism that goes with rising investment, growth and stability, that the Brand Africa Forum sought to address, through keynote speeches and discussions.

The Forum, hosted by Brand South Africa, featured an opening address by Khoza and keynotes anchored around panels on media, business & the economy and nation branding led by Dambiso Moyo, a former Goldman Sachs economist and author of the New York Times bestseller Dead Aid: Why Aid is Not Working and How there is a Better Way for Africa and Simon Anholt.

Khoza, Moyo and Anholt were joined by a chief executives from African countries which have embarked in nation branding, such as Mathias Akotia, CEO of Brand Ghana, Miller Matola, CEO of Brand South Africa and Mary Kimonye, CEO of Brand Kenya, among others.

“The Forum is aligned with South Africa’s strategy to work with key African partners to create a better future for Africa,” said Miller Matola, CEO of Brand South Africa. “It’s also in line with the our goals of enhancing the reputation and competitiveness of South Africa and Africa.”