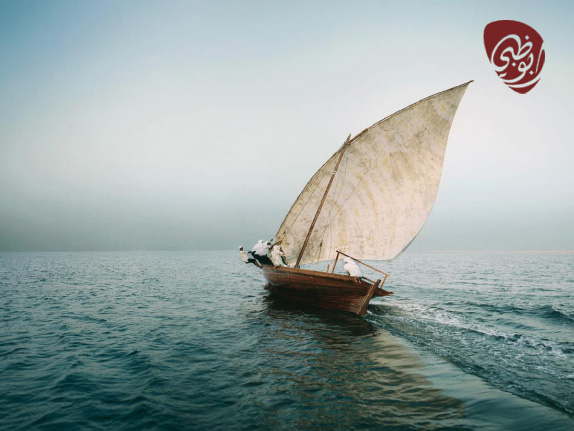 At Nation-Branding we’re not very fond of the ‘nation branding’ kind which consists only of a graphic design work for a country. We prefer the policy-making approach (which does not mean it can include, among other things, a graphic design work nevertheless). However, we can appreciate when we see one graphic brand work that it’s very well done. This happens with Abu Dhabi’s. Australian-based designer Clinton Duncan has written an enjoyable review on Abu Dhabi’s graphic brand, a work of Re – “a small group of brand designers valiantly operating out of M&C Saatchi’s Sydney office”, Clinton writes.

Abu Dhabi is the capital of the United Arab Emirates (UAE). However you may be more familiar with the world’s-tallest-tower-building, 7-star-hotel-opening, artificial-islands-in-the shape-of-a-world-map-making, or palm-creating lunacy of Dubai, the more famous of the two UAE cities. But Abu Dhabi is the capital of the intricately intertwined Emirate states — the Sacramento to Los Angeles, the Albany to Manhattan. The UAE has the good fortune of sitting atop the world’s seventh largest oil reserves, and it’s with these rather handsome profits they have decided to brand themselves and turned to the Sydney office of global ad agency M&C Saatchi and their internal brand consultancy, Re.

Re, as I’ve previously described them, is “a small group of brand designers valiantly operating out of M&C Saatchi’s Sydney office” and have a bit of form on Brand New, having been reviewed for their ANZ Bank and Australia Unlimited work. One can imagine the difficulty thrown up when a brief or request for changes from a client begins with “His Excellency requests,” but the challenge it might create for designers, is a strength for the various Emirs in their larger ambitions. What’s taking place in the UAE rivals the central planning of the Chinese Communist Party, sans the pesky problems of managing billions of people. Creating a destination brand is but one piece of the puzzle, Abu Dhabi has also been busy re-developing their airport, which also makes use of the Abu Dhabi brandmark, as a lucrative hub for long haul flights, as well as pushing their national carrier, Etihad. Close neighbors Bahrain have enticed a Formula 1 grand prix, and Abu Dhabi have plans to build a Ferrari Museum, as well as talk of an Abu Dhabi Louvre, in the model of the McGuggenheim franchise. 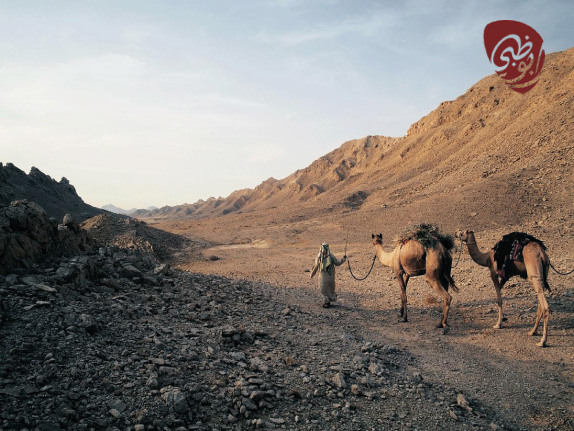 It’s all about creating a post-oil economy. The tradition and history that underpins this brand, is rather lovely — a tradition of falconry, cultivating figs and fishing or trading from the graceful Dhow sailing vessels — but there’s little enthusiasm from the populace to return to those ways. They rather like their modern, consumer culture with all the trimmings, thank you very much! But with issues like climate change, energy independence, sustainability and renewables taking centre change, many of the oil based economies have seen the writing on the wall and have set about creating other industries, rather hurriedly, to equip themselves for a future where the shiny black stuff can’t foot the bill anymore. 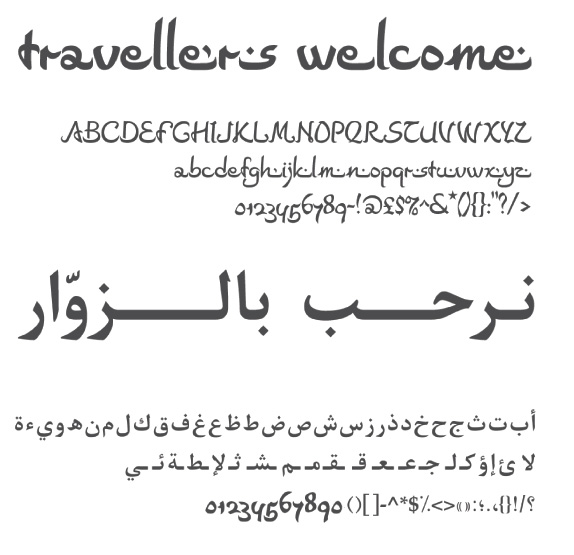 On the subject of writing on the wall, typography plays a rather important part of this identity. Much work has been invested in taking the traditional calligraphy of the arabic script, but tweak it just enough to repurpose it for use as a logo device. The designers have also attempted to create a roman typeface that sits in harmony with an Arabic typeface, as many situations will require the use of both languages. Leaving photography to the side for one moment, without this very distinctive, bespoke typography, this brand would seem very international, almost British or even Australian. Curiously the brand was indeed created by an agency from Abu Dhabi’s former colonial masters, the British, in the office of another former British colony, Australia (oh that globalization, it just doesn’t stop). It has a clean, corporate feel, but the perfect amount of curve and swirl from the traditional calligraphy to locate it as an internationally facing, Middle Eastern based, destination brand. 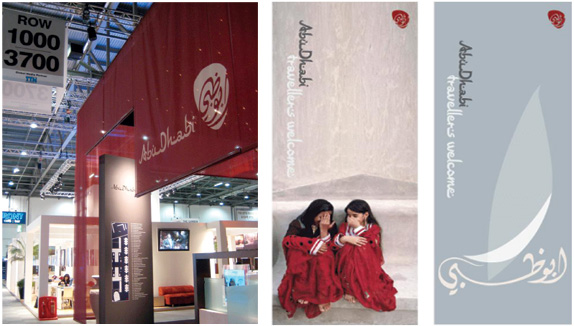 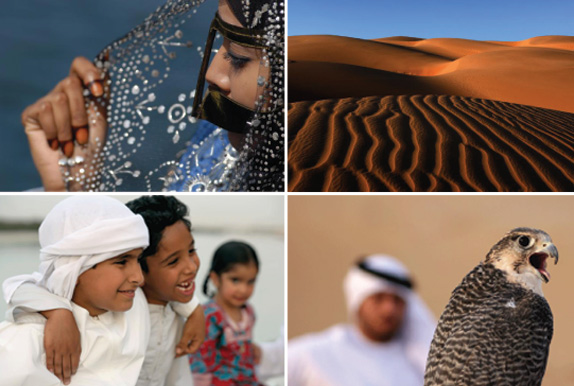 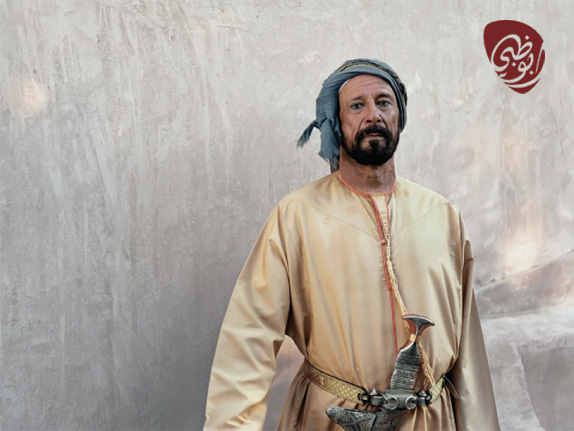 Supporting the type is a beautiful photography library by New York-based, William Hüber. It’s easy to become cynical of the hackneyed travel photography genre, but the calm and welcoming tone of Hüber’s imagery captures the exotic, undiscovered nature of the brand — but with a very palpable sense of calm and stillness in many of the shots. In one shot, it accomplishes the uncommon feat of making an un-smiling Middle Easterner with a big dagger in his belt seem almost friendly. 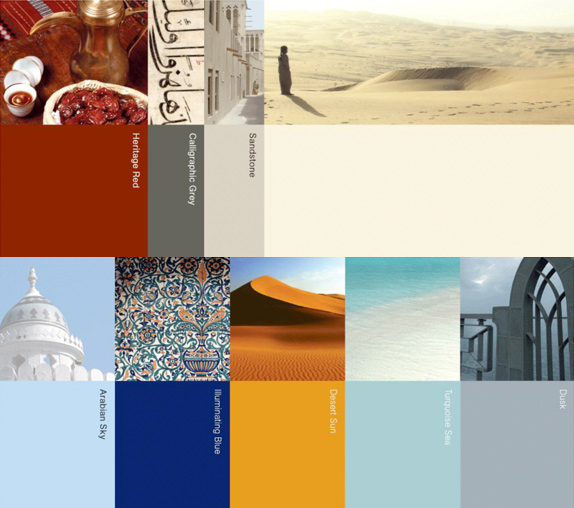 Destination branding 101: justify color selections by pairing them with similarly hued images from the destination.

The color palette re-inforces the exotic yet non-threatening feel with a desert-like beige and dark red based on the nation’s flag, plus an extended palette in every color of the rainbow, albeit in rather muted hues. Another important brand asset is a photo-frame-like bordering device, based on an outer robe worn at formal occasions called a Bisht. At first I found it annoying and chalked it up to “they were forced to put that bit in” but on reading up on the Bisht, and closer inspection of the intricate, yet elegantly rendered, graphic device, it grows on you. It also helps that it is, quote “reserved for special occasions”, and thus only appears in limited uses. 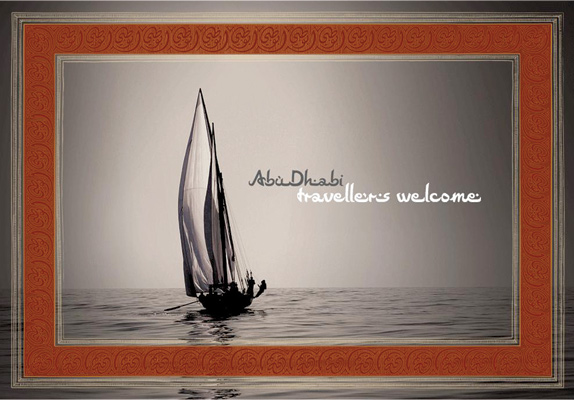 It’s a difficult position, being a westerner, evaluating such culturally sensitive work. Obviously much thought and care has been invested into ensuring the brand is respectful of the traditions and culture of Abu Dhabi, whilst also being enticing and relevant for an international audience. That balance has been kept, in my view, remarkably well. The vast distances travelled by this brand in its creation, from being briefed, tendered, pitched, developed and delivered, across multiple continents, is mind boggling. Often globalization is cast as the culprit of the international homogenization of visual culture — but it makes sense that a destination hoping to offer “something different” for early-adopting, new-seeking travelers, would be the brand to buck the trend, and take what’s best from contemporary international style, but still retain its cultural identity.