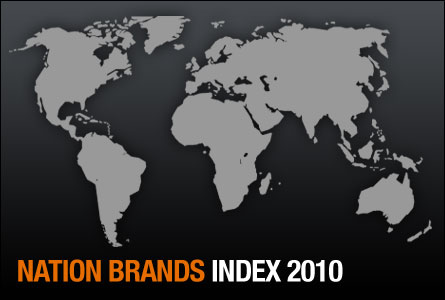 A new edition of the popular Nation Brands Index has just been released today. According to the Nation Brands Index 2010’s earliest known details, the United States continues to have the world’s most valuable country brand, a place it obtained in in 2009 after Obama’s election. There are minor changes in this year’s edition of the Nation Brands Index, but are noteworthy nonetheless. For instance, the BRIC countries continue to advance, and at a faster pace than before, their nation brand images, while the PIGS, predictably, have lost some charm because of the economic uncertainties they have been going through.

Results from the 2010 Anholt-GfK Roper Nation Brands Index, which measures the global image of 50 countries, shows the United States holding the top spot for the second year in a row as the country with the best overall brand. Among the top 10 nations, Southern Europe has seen several changes, all of them for worse. Spain is no longer part of the top 10, Italy has been overtaken by Canada, and France has lost its standing to an emerging Germany. Greece is not among the selection of only 50 nations being ranked at the Index, but one can safely assume that it has lost a number of positions, especially on the business and governance dimensions.

“After last year, which saw the United States make such a significant leap in its standing to the top nation spurred by the election of President Obama, the reputation landscape of the countries comprising the top 20 have remained relatively stable,” says Simon Anholt, the Nation Brands Index founder and an independent advisor to over a dozen national governments around the world. “However, the uncertain global economic climate, combined with financial bailouts, natural disasters and civil unrests have created some interesting shifts, especially among southern European nations.”

The 2010 Nation Brands Index survey was conducted from July 7, 2010 to August 4, 2010 in 20 major developed and developing countries that play important and diverse roles in international relations, trade, and the flow of business, cultural, and tourism activities. The survey results are based on respondents’ ratings of 50 nations on questions in six categories: Exports, Governance, Culture, People, Tourism and Immigration/Investment. The Nation Brands Index 2010 overall ranking is based on the average of these six scores.

“While top ranked nations remain to be developed countries and the BRIC countries continue to rank in the 20s, Brazil and China, boasting both economic power and increasing geopolitical clout, are the two countries that have shown some of the greatest NBISM score gains between 2009 and 2010,” adds Xiaoyan Zhao, senior vice president and director of the Nation Brands Index 2010 study at GfK Roper Public Affairs & Corporate Communications. “The steady gains of developing economies suggest that the reputation gaps between the West and the East will continue to narrow”. For example, although Japan still holds the top position on the Exports dimension, China – the recently crowned second largest exporter in the world – has moved from 21st in the Nation Brands Index 2008 to 14th in 2010 on this dimension.

Looking at the UK, Australia and Sweden

The UK has retained its place as number four in the league table of the world’s most admired countries. Sandie Dawe, chief executive of VisitBritain, said the result, which placed the UK behind the USA, Germany and France is a testament to the enduring appeal of Britain. “It is clear that we are retaining our appeal in an increasingly competitive world market,” she said. “With more governments recognising tourism as a driver of growth and ramping up their international marketing, it is striking that our ratings are remaining steady.” While the UK was fourth as an overall brand, it was also ranked fourth for being “rich in historic buildings and monuments“ and for having “a vibrant city life and urban attractions”. It was listed eighth as the country adults would like to visit “if money were no object”, 13th for offering a warm welcome and 23rd for being “rich in natural beauty”.

Mr. Anholt points out the importance of understanding not only the overall reputation standing of nations, but also individual attributes: “While the United States ranks No. 1 on the overall Nation Brands Index 2010, it ranks much lower on a few individual questions such as “behaves responsibly in world peace and security” (21st) and “behaves responsibly in protecting the environment” (26th).

Another example would be Australia which, while keeping its 9th position on overall rankings, has however been undermined in its ‘welcoming’ image by recent episodes of xenophobia, especially with Indians. “The good news is that Australia’s overall image hasn’t changed at all. It is still the ninth-most admired country in the world,” Mr Anholt explains to The Australian. “But when you look more closely, there is a very clear contamination effect from the situation with Indian students,” he said. Two years ago, Indians considered Australia one of the most welcoming countries on the planet. Now it ranks 46 out of 50. “The success of multiculturalism – the great Australian social experiment – wasn’t part of our reputation before, and was therefore unable to protect us from damage when something like this happened,” Mr Anholt said. “People know just a few things about Australia – and it’s an enviable reputation to have – but it is just not very broad”. “China, for example, ranked Australia first in 2008 for a warm welcome. That dropped to third in 2009 and ninth in 2010. What that means for Chinese tourism and investment is problematical.” Additionally, the perception of Australia as a welcoming destination has also been adversely affected in South Korea, Brazil, Japan and Italy – most likely a flow-on effect from the Indian situation.

”A well-rounded national reputation is an insurance policy against that kind of thing,” Simon Anholt told The Age. But Australia, it seems, does not have it, as the country is viewed as the ”dumb blonde” of the world, attractive but shallow and unintelligent, according to him. ”What you have is an image of a country that is considered to be very decorative, but not very useful,” he said.

But Anholt also said Australia was ranked best in the world for natural beauty and as a place to visit if money was no object. Additionally, he said the success of Australia’s tourism promotion campaigns had produced an ”unbalanced” view of the country. “Rather than waste time fiddling around with promotional campaigns, what Australia needs to do is to invest in the sectors which demonstrate its seriousness and its capability and education is one of them.”

On its part, Sweden remained at the tenth position. “Sweden is certainly one of the most admired countries on the planet: it’s the only Nordic country that nobody confuses with any of the others, and it ranks well above the others”, Simon Anholt commented to The Swedish Wire. “Sweden’s image is so good, that anything good or remarkable that anybody does in Denmark or Finland or Norway or Iceland automatically accrues to Sweden’s benefit: it’s a sort of feudal reputation tax”, Anholt added. The opposite is also true, and good things occuring in Sweden are also haloed to its neighbouring countries – for their benefit too.

But Brand Sweden‘s strength also has its tolls for its neighbours. As the central power in Scandinavia, Sweden displays a centripetal force and absorbs, as if they were their own, the brand value of non-Swedish Scandinavian brands that many people regard as Swedish, such as Lego (because of the IKEA, kind of DIY leanings), Carlsberg and Bang&Olufsen (because of the Swedish-sounding names), and even Nokia (because of Ericsson confusions and only when the Finnish company is not thought of as Japanese). The corollary is that Scandinavian countries should do an effort to distinguish itself better if they want their national brands to work for their (genuine) country of origin nation brand. Otherwise Danish, Norwegian and Finnish brands will be considered Swedish just like Blackberry is considered a US company and not a Canadian one.