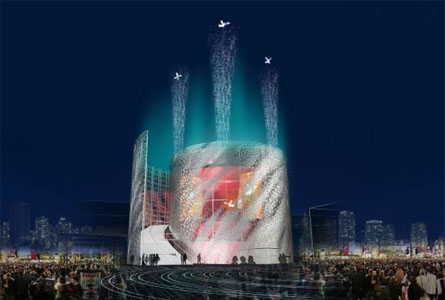 As one could easily guess, World Expos are a wonderful playground for nation branding. In these fairs you can find most countries in the world, and also find out how they want to portray themselves to the rest of the world. In other words, how they brand themselves. It’s like an (expensive) beauty contest for nations. Over the last months Jay Wang from the USC Center on Public Diplomacy in Los Angeles, CA has done a formidable work covering the pavillions of some of the most important countries and the world and has also interviewed some of the executives in charge of them. With such a background, Wang’s opinion on how countries have used the Shanghai Expo for its nation branding endeavours is extremely valuable.

As a venue for public diplomacy, the World Expo is highly valued yet under-analyzed. This is particularly true of the current Expo in Shanghai.

For many countries, Shanghai Expo is the most expensive and arguably the most important one they have ever attended. And, for the millions of Chinese, for whom international travel is still a luxury they cannot afford, visiting the Expo has become a once-in-a-life time chance to get a glimpse of other countries epitomized in the national pavilions. The potential cultural impact can certainly be vast.

The Expo being a “tournament of cultures” — more celebratory than reflective — participant countries are keen to engage and impress their visitors through representations and interactions at their stylized pavilions. The essential question facing these national pavilions is how they define and deliver messages that will stick.

Based on our conversations with representatives of a dozen national pavilions at Shanghai Expo, I would like to highlight several tradeoffs countries have to deal with in their presentations about their national brand.

To use or not to use stereotypes

This is a fundamental challenge in communicating about a country, especially to the mass audience. Countries often seek to leverage events like the Expo to counter or overcome existing stereotypes, and especially the negative ones. They certainly don’t want to come off as perpetuating clichéd images and associations.

On the other hand, stereotypes can be productively harnessed to entice visitors into your story as it unfolds in the pavilion; hence should not be wholesale rejected. Stereotypes form the basis of our expectations in a communicative context. An adroit use of them can effectively create visitor engagement, whereas simply presenting visitors with the unfamiliar or the unknown may alienate your audience, thus missing even the opportunity to make a connection.

This brings to my second observation about what to include in the pavilion. We often hear pavilion representatives say “our country has a lot more to offer than …” The options for shaping one’s country message in the pavilion are literally endless, ranging from focusing on a select few issues to providing a panoramic view of the country, from politics and business, to culture and society. The desire to show a broader picture of one’s country is understandable, as there is less risk of being accused of giving short shrift to the multi-faceted society one represents; not to mention the various special interests involved in putting together the displays.

But a singular focus helps to sharpen visitor impression, and especially the distinction of your country and pavilion. This is important in the context of visitors’ limited attention span as they generally move from one pavilion to another to maximize the number of “countries” they can visit in any given day. With more than 200 pavilions at the Expo, it is a decidedly competitive and comparative environment.

The next issue is to what extent countries should localize their message at the pavilion, and, in the current case, to the Chinese, who make up the vast majority of the visitors.

The choice can be represented on a continuum between highly localized as is the case of the South Korean Pavilion and highly globalized in the example of the Spanish Pavilion. In other words, if the Expo were held in a different country, for Spain the same pavilion could be appreciated with only slight tailoring necessary (e.g., the exterior of the pavilion); while for South Korea a totally different pavilion would need to be built. Many pavilions, of course, consider and attempt a blend of the two approaches.

The growing information transparency also entails the need to effectively handle communication to multiple audiences, including one’s domestic audience. How one aligns communication designed for the consumption of the Chinese with concerns of the domestic constituents becomes a point of contention. The interests and agendas of these two publics can be widely divergent.

For instance, for the home country audience, representations at the pavilion can be a source of national pride. On the other hand, some of the pavilions may not be favorably viewed in the eyes of their domestic audience, but are nonetheless popular with Chinese visitors.

These tradeoffs are certainly not unique to the World Expo, but are common concerns in managing a country’s image and brand in the global arena. There are many other tensions and dilemmas in the process that require negotiation and reconciliation. The mapping and understanding of these options is a critical step to developing a sound nation-brand strategy.

A little good news from the U.S. Pavilion

There has been plenty of bad news concerning the unimaginative U.S. pavilion at the World Expo in Shanghai. Indeed, like many who have visited the pavilion, I couldn’t find any “wow” moments. Still, there are noteworthy highlights, especially when viewed from the vantage point of a Chinese visitor.

It is important to bear in mind that the Expo is not made for everyone — just like state fairs are not for everyone. While the Expo is billed as a global gathering, it remains primarily a local event. This is particularly true of this Expo, with more than 90% of the visitors coming from China. Therefore it is all the more meaningful to discuss the Expo from the perspectives and experiences of the locals, rather than from afar.

For many Chinese visitors, the greetings by President Obama and Secretary Clinton, projected on giant movie screens, are considered a highlight. The two American public diplomats, popular celebrities in their own right in China, appear personable, engaging, and respectful. This is poignant, because in the Chinese context people do look up to leaders and authorities, and in terms of communication style, Chinese leaders are, in contrast, often seen as remote and removed.

There is a lot of criticism of the ubiquity of corporate logos in the American pavilion. There is certainly nothing inherently wrong with corporations being involved in such events. In fact, one may argue, as corporate citizens, they should contribute to such global engagement based on their enlightened self-interest. The question is how.

I also think some of the “brand integration” in the pavilion was poorly executed (e.g., the prominent logo featured on the polo shirts worn by spokespersons in one of the movies). Any marketer would find such placement crude and not smart at all.

Fortunately, in China, American brands (including most of the pavilion sponsors) are well liked and even admired. The Chinese people are probably more trusting of the brands from these companies than the policies of the American government. Needless to say, Chinese brands pale in comparison as well.

If there is one shining moment at the U.S. pavilion, it is the “student ambassadors.” These are American college students who come from across the country to volunteer at the pavilion as guides to Chinese visitors. (By the way, my home institution USC is the lead school for this program, but I am not personally involved).

More than any other country at the Expo, America is better represented through the physical presence of these young people (all speak some level of Chinese). They have daily, direct contact, pleasant or otherwise, with Chinese visitors who typically have to wait in line for a couple of hours to get inside the pavilion. This is truly people diplomacy in action.

Most importantly, these young people represent the future of U.S.-China relations and, for that matter, of America’s relations with the world.

Article by Jay Wang, associate professor at the University of Southern California’s Annenberg School of Journalism. A scholar and consultant in the fields of international corporate communication and public diplomacy, he joined USC’s faculty in August 2008. He is also the lead researcher on the school’s nation branding at Shanghai Expo 2010 project.