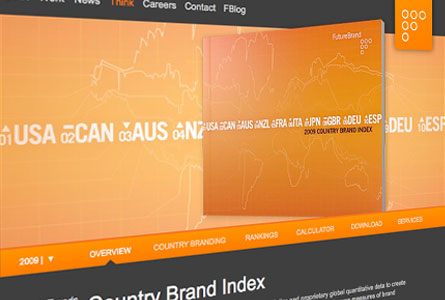 The brand rankings (produced in partnership with BBC World News this year) cover 102 countries and aim at measuring the “intangible asset” of how the country is perceived amongst international business and leisure travellers, travel and nation branding experts and opinion formers.

According to the survey, Canada is “the most respected country brand in the world”. Canada’s rank jumped from 12th in 2006 to 6th the next year and to 2nd by 2008, a position it maintained last year.

Canada has climbed to the top spot ousting the United States. The USA’s No. 1 ranking last year was attributed to the “Obama effect,” and its slip into fourth place this year likely also is Obama-related, FutureBrand’s chief strategy officer in North America Daniel Rosentreter told to USA Today.

“What we’ve seen this year is the shine may be off. Obama hasn’t delivered what the world expected,” he says.

According to the international branding firm, the 2010 Country Brand Index top-ten ranking is as follows:

The three worst performing country brands were Zimbabwe, Iran and Pakistan. Complete results from the Country Brand Index 2010 will be showcased at the forthcoming World Travel Market forum, to be celebrated next week in London.

FutureBrand’s presentation will take place on November 11, 14.00h, at the North Gallery Room 4&5. FutureBrand’s Australian-born destination strategist Victoria Berry and Daniel Rosentreter will be the keynote speakers. Complete results from this study are expected to be posted online on November 15th.

The 2010 edition of the Country Brand Index survey queried 3,400 business and leisure travelers on five continents, augmented by expert focus groups, on their image associations of various countries in five categories, including tourism appeal, quality of life and value systems.