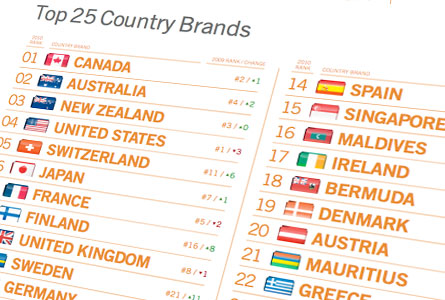 It’s November and it’s time for the annual Country Brand Index to be released, as we announced on our Early Results from the 2010 Country Brand Index post. This index is a yearly study made by FutureBrand, a global brand consulting firm, and is based upon a global quantitative research study with 3,400 international business and leisure travellers from 13 countries on all five continents, qualified by in-depth expert focus groups that took place in 14 major metropolitan areas around the world.

The 2010 Country Brand Index examines and ranks country brands by their overall performance in six areas: Awareness (do key audiences know that the country exists? How top of mind is it?), Familiarity (How well do people know the country and what it offers?), Associations (what qualities come to mind when people think of the country, in tourism, heritage and culture, business climate, quality of life and value system?), Preference (how highly do audiences esteem the country? Does it resonate?), consideration (is this one of the countries being thought about for a visit?), decision (to what extent do people follow through and visit the country?) and advocacy (do visitors recommend the country to family, friends and colleagues?).

On the 2010 edition of the Country Brand Index, Canada has finally dethroned the United States as the most valued country brand, after climbing steadily over the last few years, from a 12th-place ranking in the same survey just four years ago. This is the results from the top-ten ranking of the 2010 Country Brand Index:

This year’s leading country brands share some common features. They are all democratic, progressive, relatively politically and economically stable and do business in English. As ever, there are rising and falling stars, but position is not the whole story. Themes are emerging in 2010 that hint at future drivers of country brand strength, including the importance of value systems and the freedom of communications: a major factor in world perception of a country, its culture, people, businesses and brands.

But there’s a more obvious feature. Watching at the results, it’s crystal-clear that the economic crisis has been a powerful factor in country brand strength this year, but mainly for those that avoided it. For instance, the country brand winner Canada has shown strong performance among the G7 nations over the last years, being the last into recession and the first out, not least thanks to fiscal conservatism that helped it to avoid the sub-prime crisis.

The other two nation brands on the top three (Australia and New Zealand) also managed to escape the worst of the global economic crisis and maintain relatively strong economies throughout 2010.

On the other side, countries that have fallen down the rankings – notably the USA and the UK – have both suffered conspicuously as a result of high-risk ventures and the banking collapse.

Let’s look at the United States, which has fallen three places this year. Just as its rise to the top spot in 2009 reflected global attention, hope and anticipation of change promised by the new administration; the US’s nation brand has suffered with the diminishing approval ratings of its new president. This phenomenon shows that the nation-branding ‘Obama effect’ can work both ways. And it could also indicate that Brand America was in part artificially stimulated by the charisma of an individual.

With unemployment nearing double figures and a slower than predicted recovery, the world’s largest economy has also been affected by the Gulf of Mexico disaster and sustained criticism over foreign policy. Brand USA, however, continues to communicate strong and desirable values in everything, from popular culture and entertainment to food and retailing brands.

Here are the complete results for the top-25: 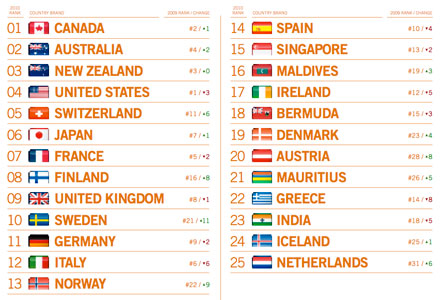 FutureBrand has identified 4 countries which the branding consultancy consider ‘rising stars’ upon their performance and improvement in the report: Chile, Israel, Argentina and Israel.

Chile  (#40 +19) has improved across every measure this year with huge leaps in Awareness and Advocacy, as well as in perceptions of Political Freedom. Moreover, Chile was the country with the best improvement year over year, by climbing 19 spots in a row. The San José miners’ rescue became a global news event generating extraordinary goodwill for President Pinera and brand Chile. This, coupled with growing economic stability, makes Chile a brand to watch in the region.

Israel (#30 +11) With significant marketing investment for tourist destinations, Israel moves in the right direction in 2010 – particularly in Tourism metrics like Authenticity and History, which align very well with campaigns promoting heritage and culture.

Argentina ( #33 +10)  scores are up across the board for brand Argentina this year – particularly for Advocacy. After a quarter-finals position in the World Cup and significant GDP growth in the first half of the year, Argentina became the first Latin American country to legalise same-sex marriage in a move signalling a triumph of liberal values in the region.

Iceland’s ( #24 +1 ) rise is a counter-intuitive development for a beleaguered country that suffered negative global attention during the banking crisis and the Eyjafjallajökull ash cloud flight ban affecting millions of travellers. Perhaps a signal that the world’s oldest democracy still carries some goodwill with international audiences, as well as highlighting the impact of efforts to market Iceland as an attractive transatlantic stopover at a time of unprecedented global brand awareness, Brand Iceland‘s scores for Familiarity have leapt up this year.

The study also mentions those countries which have lost more ground in 2010 when compared to their rankings in 2009.

Greece (#22, -8) presents the most conspicuous shift, dropping 8 places from 14 to 22, set against a high-profile financial crisis and subsequent industrial relations problems following government spending cuts and tax increases. Associations of Greece as a tourist destination are traditionally strong in this study, but during sustained periods of bad news – affecting confidence around core services and infrastructure – consideration and advocacy are threatened, as we wrote earlier this year.

India (#23, -5) is another falling brand. Despite being en emerging powerhouse, India only ranked 23rd. The nation is down five places from its perch in 2009, when it stood at 18th position. Concerns over health and safety were reasons cited by those surveyed. The country’s performance has been linked to the negative publicity it garnered in the run-up to the Commonwealth Games in New Delhi this September in addition to terrorist attacks and threats that both civilians and tourists have been subjected to in recent years.

Italy (#12, -6) also falls down the ranking despite increased efforts to boost tourism this year with high profile internal and external advertising initiatives featuring the Prime Minister himself. However, this is set against a backdrop of sustained criticism of Silvio Berlusconi’s premiership and the financial difficulties the country has faced in the global economic crisis.

China (#56, -8) loses 8 spots. The Olympic effect seems not to have lasted long for China, with 2010 bringing public relations challenges around post-Copenhagen environmental impact and high-profile censorship battles with Google. Significant decline in perceptions of Political Freedom contribute most to this year’s drop in the rankings. A fall for China despite its promotion to the second-largest economy shows that financial growth is no guarantee of a strong nation brand.

The United Arab Emirates’ country brand (#28, -5) has retreated 5 places. While Tourism metrics overall remain relatively strong, falls in Preference and Consideration contribute to brand UAE’s decline in 2010. Despite significant investment in brand building over recent years, high-profile economic troubles affecting Dubai and the other Emirates impact a country  keenly associated in its brand image with wealth and prosperity, but traditionally scoring less well on the dimension for Value System.

Russia (#81, -9) was down to 81st position in the 2010 edition. Anti-government protests surrounding March elections, ongoing corruption scandals and economic uncertainty provide the backdrop to a steep fall for Russia this year. Specifically, a steep drop in the score for Political Freedom has hit this emerging market in the 2010 rankings, as Russia had to grapple with issues concerning both political freedom and corruption, the study says.

The Philippines (#65, -29) ranked 65th out of 110, down 29 places from last year. “The Philippines has been beset by high-profile violent incidents this year that might have overshadowed the election of a new president pledging to reform a country troubled by perceptions of corruption,” a statement released alongside the report read. “Time will tell if the Philippines’ natural, historical and cultural assets, a relatively stable economy, and a new government will reverse this downward trend for the brand,” Futurebrand said.

Zimbabwe, Iran and Pakistan were, in that order, the world’s “Worst performing country brands”, according to the study.

And the top 10 “for quality of life”: Switzerland, Norway, Sweden, Finland, Canada, Denmark, Australia, Singapore, Germany and the Netherlands.