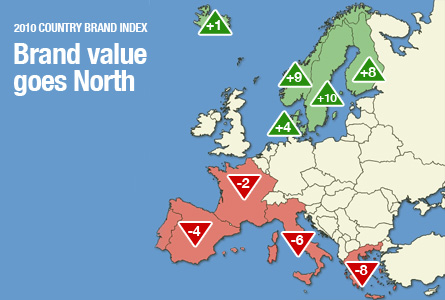 A noteworthy trend can be seen by looking at the rankings in the 2010 Country Brand Index. In Europe, nation branding value is moving from South to North.

Without a doubt, the countries winning more nation-brand value this year at the Country Brand Index were the Scandinavian ones. They all have improved their ranks in a visible and almost insulting way. Finland has leaped 8 spots and has entered the top-ten, while Sweden has jumped no less than 10 places in a row and has also entered the top-ten. Norway has advanced 9 spots (from #22 to #13), and Denmark has moved four positions (from #23 to #19) upwards too.

Even the bankrupted Iceland has been able to keep its nation brand profile high and has managed to advance one spot (from #25 to #24). The Icelandic case could very well be an evidence that the ‘Scandinavian’ brand halo is like an iron shield – it makes countries resilient against adverse circumstances, however tough they might be.

Whatever the reason, Iceland proves that a country can hold a positive brand image despite undergoing financial, political and natural catastrophes, even when they come combined. Despite being in the news over the year for the bad reasons – a financial collapse, a political landslide and the eruption of a vulcano (whose ash cloud interfered with air travel in Europe), the country has made the most from the being at the spotlight and turned global attention into higher levels of awareness and advocacy (like Chile also did recently with the Chilean miners episode).

On the other fold of the European continent are the most significant losers of the 2010 edition of the Country Brand Index. Unsurprisingly, countries like Greece, Spain and Italy, which have traditionally enjoyed a strong nation brand power because of its strengths in history, culture and natural beauty, have lost a handful of places in their rankings. These results are consistent with those previously found in the 2010 Nation Brands Index, where the Med countries also underwent a country brand downgrade.

Greece presents the most conspicuous shift, dropping 8 places from #14 to #22, set against a widely broadcasted background of financial crisis and subsequent industrial relations problems following government spending cuts and tax increases. “Associations of Greece as a tourist destination are traditionally strong in this study, but during sustained periods of bad news – affecting confidence around core services and infrastructure – consideration and advocacy are threatened”, say the Country Brand Index’s authors.

Spain also moves down the table, showing that not only small, but also large economies are not immune to shifting brand strength in straightened economic times. Spain drops 4 places (from #10 in 2009 to #14 this year) since its brand value has suffered the public debt crisis, while Italy falls even more than Spain – no less than 6 places (from #6 to #12) due to a bizarre mix of headlines ranging from political turmoil to xenophobic laws, and from corruption to public service problems in Naples, all of them salted with with premier Silvio Berlusconi’s own sex scandals, besides Italy’s share of financial difficulties.

Susanna Bellandi, CEO at FutureBrand France&Italy, told the Italian paper Il Sole that “we need to continue investing in those assets at which we’re stronger, arts and culture, because countries are becoming more and more competitive”. “But he government’s instability, but also events in Campania, earthquakes and sex scandals have damaged Italy’s ‘dolce vita’ reputation”, Bellandi added.

Similarly, France has also fallen this year, but only by 2 places, showing that it’s got the strongest nation brand of the Southern European economies. Another country under heavy international stress because of economic reasons, Ireland, has also lost brand charm at the 2010 Country Brand Index and has dropped 5 spots (from #12 to #17)  – the ultimate evidence that economy is a weighty part of any nation brand. Unless you’re Scandinavian, of course.