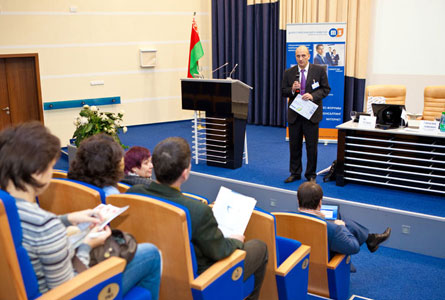 As we announced a few weeks days ago, a forum under the name “Image of the Republic of Belarus: positioning and promotion of cities and regions” was celebrated in Minsk on November 25-26, 2010.

Over 100 people participated in the meeting, among them representatives of several Belarussian ministries and delegates from embassies in the former Soviet republic, as well as of private companies and organizations.

Because of the insufficient development of the touristic infrastructure in the country, 1-2 days tourist routes under various subjects were sketched in the forum. Belarussian bogs, for instance, could be a marketed product since the country’s swamplands and their ecosystems are pretty rare in Europe.

During the talks, the obvious shortcomings in the appeal of ‘Brand Belarus’ were sometimes tackled by turning the country’s weaknesses into strengths. For instance, one speaker recommended that as Belarus is usually considered as a too quiet and sluggish country, it could be smart to use this fact as an advantage and prompt potential tourists to travel to Belarus “to listen to and enjoy silence”.

The speaker went further and argued that if people outside the country consider Belarus to be a dictatorship, even this negative fact could be monetized – after all, the most visited building in Moscow is not the Kremlin, he explained, but the KGB building at Lubjanke.

As you can see, most of the discussions revolved around Belarus as a tourist destination, but the issue of Belarus’ stand in the international sphere was also addressed by some participants.

One speaker noticed that “Belarus is the most Eastern of all Western countries of Europe, and the most Western among all Eastern countries”. Well, this ain’t news really. Poland claims something similar, and so does (or did) Slovakia, Slovenia, Lithuania and others on different levels. Not a few Central-Eastern Europe claim to be at the vertex between East and West.

The forum also became a convenient floor to discuss Belarus’ national identity, which is somewhat controversial among the country’s citizens. For instance, the chairman of ‘Batskavshchyna’, an international public association made of diaspora Belarussians, stressed that Belarussian nationals first need to ‘buy’ the idea of a Belarusian nation before its corresponding nation brand can be promoted. She remarked that while Belarusians do not feel proud of the country’s historical identity, creating an image of the country will be difficult. This speech was made in the Belarusian language, and that caused some discussion.

The government also contributed to the forum. Andrey Savinyh, the press secretary of the Ministry of Foreign Affairs  told the audience that it is necessary to create a coordinating workgroup lined up by representatives from government, business, public associations and professionals to create and develop the brand image of Belarus. Time will tell if somethings emerges from these intentions.