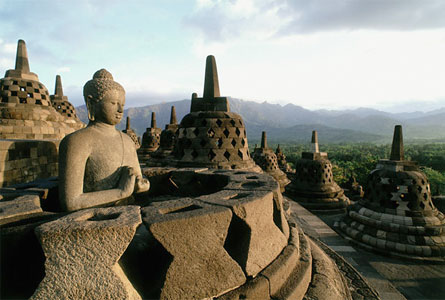 According to Homer Simpson, jokes about national stereotypes are funny because they are true. That is, if we take perception to be reality, and in marketing we do. A country’s reputation is based on the perceptions of others, though these are often nothing more than cliches.

People are often wilfully ignorant of what others think of their country. I have yet to meet a Frenchman who has heard that his country uses less soap than any other European nation.

A country’s reputation affects every interaction with the outside world. That’s most obvious in trade, investment and tourism but it also affects how the country’s citizens are treated when they go abroad to study, work or conduct business. If a government can enhance the reputation of a country, it has done a great service for its citizens. It should be the duty of every government to work toward developing its country’s image abroad. In the global market, country of origin matters for people and products alike.

I say reputation and not brand because a country is not a corporation, and the idea of branding a country is misleading. I grew up in Northern Ireland, a country of less than two million people. Yet within that small country you will find greater diversity than within the largest corporation.

By diversity I am not talking about the color of the people’s skin but the kind of diversity that really matters in human affairs — diversity of thought. Corporations tend towards uniformity of thought, and can therefore project a simple brand image. Attempts to brand countries have failed in part because the methodology of branding is too superficial.

If Northern Ireland is too complex to be treated the same way as a corporate brand, then how much more difficult is it to brand a very large country like Indonesia? Actually the branding, in the sense that most people understand it, is easy: Create a logo and a tagline and then make an expensive TV commercial. But it serves no good purpose. Besides, the best brands understand that word of mouth is more powerful than advertising, and a brand needs good ambassadors.

These days every company wants to turn its customers into brand ambassadors. Should that not be even more true of a country and its citizens? Yet when governments do branding, they resort to slogans.

In Asia, country branding usually means putting a single adjective in front of the name of the country. Take “Incredible India” — incredible is an adjective that could apply equally to the Taj Mahal or the number of poor people sleeping on the streets of Calcutta. It’s big money for advertising agencies, but this type of branding has little effect on the reputation of a country. India’s tourism campaign does two things well: it’s everywhere and it plays up to positive cliches about India.

If Indonesia has to have a marketing slogan, it may as well use the national motto, “Unity in Diversity.” After all, in business the brand strategy follows the business strategy. The only reason for changing it to “Ultimate in Diversity” is so a consultant can get paid.

Having such a low visibility damages the national reputation. It amazes me that you can hide a country of this size. A nation engaged internationally in politics, culture and trade can develop a reputation that better withstands bad news. Such countries also find their reputation is closer to reality.

By this measure Indonesia’s image is not an asset. There is a lot wrong with Indonesia, but there is also much that is good and sometimes uniquely wonderful. The country’s reputation for corruption is not a fair reflection of the reality, but I wouldn’t say it does not deserve its image. Any country that leaves its pubic relations to the foreign press is asking for trouble. Nor does Indonesia do enough to promote its culture, as was evidenced by the recent misunderstanding with Malaysia over the Balinese pendet dance.

However, there are limits to what a country can do to change its reputation. Unlike a corporation, a country does not have a single unifying purpose (except, perhaps, Singapore or Monaco). Even within governments, departments are often at odds, as we saw recently here in Indonesia in regard to tourist visas. There are so many more touch points for a national brand than a corporate brand, and much less control over them.

A country can, however, develop a marketing strategy based on national identity and policy that helps guide its actions in developing its reputation. I believe that if Indonesia is to adopt a brand strategy it should be a “challenger” strategy, which in marketing is used to propel the third or fourth-ranked product to the top of its category. If done right, the strategy will have the most impact. It is also a realistic role for an emerging power.

There are many opportunities for Indonesia to position itself as a challenger. ??It can challenge the view that Asia is only China and India, an important move for investment. ??It can also challenge the view that an Islamic nation resembles Saudi Arabia, which could transform international relations. ??Taking a page from the United States, which successfully challenged Britain for leadership of the English-speaking world, Indonesia could challenge Arab countries for leadership of the Islamic world.

What the Indonesian government must do first is make a realistic evaluation of the country’s reputation before developing its strategy. It should then monitor the country’s reputation across key indices like politics, trade, culture and tourism. In formulating policies and initiatives, the government should take account of their effect on the national reputation. This is also the simplest way to be alert to the unintended consequences of policies on other aspects of national life.

In everything that it does, the government must act as a challenger brand, giving purpose to those who implement its policies. The country’s reputation should be directed from the very top.

President Susilo Bambang Yudhoyono is well-suited to lead a challenger strategy. He is very comfortable with new ideas, and a challenger brand must have ideas. Besides, one of the best ways to change a country’s reputation positively is through innovation. South Korea is taking that route. The process is still a slow one, but a retired general will appreciate that strategy is better than slogans.

Of course, executing the strategy is another matter, and Indonesia should avoid confounding its own efforts. Tourism marketing in Indonesia usually begins with a poor strategy, then compounds it by poor execution.  For example, why challenge reality by portraying Jakarta as a tourist destination, especially when Indonesia has so many natural wonders? There is a reason why Bali is more famous than the rest of the country, and if people realized that more of Indonesia was like the resort island than Jakarta, they would be more likely to visit.