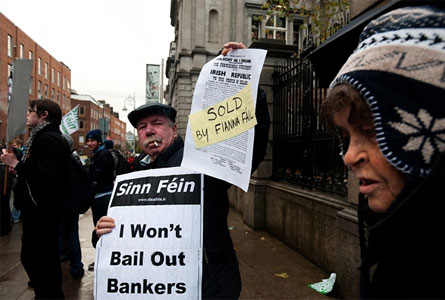 We’ve touched the issue of before (see our ‘Economic crisis may force countries to re-brand’ post). Small economies like Dubai, Greece and Iceland among others have undergone massive preassures in the last couple of years, and their image, their nation brand so to speak, has been more or less damaged. More recently, Ireland has been at the world’s spotlight over the country getting an EU-sponsored bailout. Does it impact on Ireland’s brand image? Has it any consequence on Ireland’s reputation? Can the situation be reversed?

In recent weeks, the focus for Ireland and indeed the world’s financial markets has been on devising a plan to remedy the country’s precarious banking and fiscal affairs.

With the basis of an agreement having been reached with the IMF and the EU around initiatives to help restore Ireland’s financial credibility internationally, there is now a need to focus attention on restoring the nation’s reputation.

The economic and financial problems that the country faces are still daunting.  However, the nature of the crisis is, in truth, much broader and more serious in as much as the entire foundations of Ireland’s nation brand have also been undermined.

The concept of nation brands is founded on the realisation that, in an ‘overcrowded’ global marketplace, countries are, in effect, competing not just for the favour of investors and the wider financial community, but also for other globally focused stakeholders such as tourists, media, skilled employees, regulators and NGOs.

Thus, economic and financial fundamentals, such as a country’s fiscal position, tax regime, trade balances and business climate are only the most obvious elements of what drives international prosperity, with wider competition between countries, such as that for global talent, also key.  In this ultra-competitive environment, reputation can be a prized asset (or potentially a significant liability) with a direct effect on future political, economic, social and cultural fortunes. Successful countries identify their image and key strengths, and prioritise the appropriate policies to strengthen such attributes.

Countries with a range of branding problems right now, such as Ireland, Greece, Israel, and China, face an uphill battle changing the perception others have of them. However, history has shown that reputation can be recreated and once again become a key driver of not only national pride, but also economic success and what flows from that in terms of wider social and cultural benefits.

In relation to Greece and Ireland, for instance, one only has to recall the Asian economic meltdown of the late 1990s to remember that markets can have short memories of past financial misdemeanours.  However, the subsequent experience of Japan (whose own economic turmoil preceded the late 1990s) underlines that this kind of rejuvenation is not inevitable in any short period of time.

The way forward for Ireland must be to recognise that rebuilding its brand is not just a political issue for the Government to address.  Instead, the most effective country reputation strategies generally align all key stakeholders, across the public and private sectors, around a single powerful vision for global positioning.

Right now, one of the problems in Ireland is that there is a vacuum of power in which no single set of stakeholders appear to know how, and/or have the capacity, to take control of this issue.  The government has been weakened.  Meanwhile, business leaders and the public, looking for a lead from politicians, are often consumed by frustration of what they generally regard as excessively pessimistic reporting of the country’s plight, and/or the ‘short-termism’ of elements of the financial community.

What is needed is to recognise that relatively successful countries readily identify their brand strengths, and draw on their comparative advantages to find ways of encouraging growth by attracting the people, businesses and investment they need.

Here, Ireland might find the example of New Zealand instructive, particularly given the similar population size of the two countries, and their close geographical positioning near to a larger state (the United Kingdom and Australia respectively).

The Kiwi case study is also useful because the ‘New Zealand Way’ initiative that emerged in the 1980s originated in the private sector, but was forged in partnership with the public sector.  Given the present uncertainties around the Irish Government, the private sector will need to pick up the mantle, at least initially, of re-forging Brand Ireland.

The principal driver for change in New Zealand in the early 1980s was a difficult economic climate, partly caused by the loss of preferred trading status with the United Kingdom (one of the nation’s major export markets).  The country was also then perceived as a relatively remote backwater and, despite its scenic beauty, not a major global tourism destination.

Faced with this predicament, the private sector recognised that a strong  reputation for quality would be hugely beneficial if the country was to compete effectively in global export markets.  Here, the massive untapped potential of the country’s natural environment was recognised, not just in terms of natural produce exports (including meat), but also for building a destination brand for tourism and outdoor sports.

The New Zealand example underlines how a simple, unified cross-sectoral vision can be enormously powerful.  Of course, the country is not unique in having an unspoilt natural environment and quality produce.  But it has managed to capture the world’s imagination with its consistent branding that has put natural values firmly at its core.  A key lesson here for Ireland is that, while circumstances are important, opportunities need to be created.

As in New Zealand, it is the private sector in Ireland which will need to step up to the plate to begin the process of defining a post-crisis vision for the country.  This process will involve consideration of wide-ranging attributes such as governance, security, infrastructure, connectivity, tax regime, political regime, culture, and environment.  In other words, what it is that will define Ireland’s future reputation.

Many Irish business leaders have already succeeded in turning around their own businesses, including failing brands, despite in some cases a sense of inevitable decline about them.  In collaboration with the public sector, they now need to apply these same skills and energy to a different and much larger challenge.  While the process of finding a shared future vision may not be easy, the prize for success will be nothing less than a new foundation-stone of economic growth for at least the next generation to come.

Article written by John Keilthy is Managing Partner of ReputationInc Ireland and is a former business journalist and director and chief operating officer of NCB Group. Article first published here.