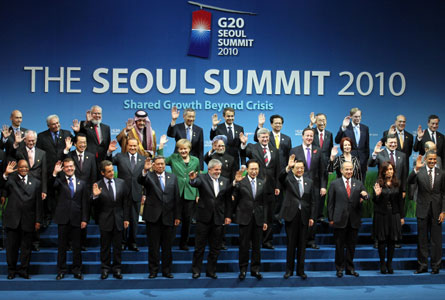 The South Korean government needs to set up a unified source of information on what’s happening here as well as the country’s unique culture and history to meet the growing interest from foreigners following the successful hosting of the G20 summit last November, a Korean public relations expert told a Korean newspaper.

“We must ask ourselves if we have effective communication tools that can address the growing interest in Korea around the world. The answer is negative”, said Yoo Jae-woong, an advisor to lawmakers and government officials on overseas promotional activities. “All the information about Korea should be provided in a quick and accurate manner in different languages, such as English, French and Spanish. But such a system doesn’t exist here”.

Yoo stressed the importance of collaboration between the government and private media outlets that have long served as major sources of information for foreigners to build the system as part of a global outreach program. “It’s up to the government to set up a database that can easily be accessed by foreigners as well as a pool of talented PR experts. That’s all about improving the country’s international status”, Yoo told The Korea Times.

The 53-year-old professor of Eulji University in Seongnam, Gyeonggi Province, served as the head of the state-run Korea Overseas Information Service, which was under the wing of the now-defunct Government Information Agency, from 2004 to 2008. The organization was renamed the Korean Culture and Information Service and became an arm of the Ministry of Culture, Sport and Tourism after President Lee Myung-bak took office in early 2008.

The concept of “nation branding” has become increasingly familiar here as the Lee administration has introduced various initiatives to promote Korea’s economic and social achievements abroad, and to attract foreign visitors and investment. In terms of global image as a nation Brand Korea lags behind its multinational firms such as Samsung, LG, SK and Hyundai.

Policymakers, led by the Korean Council on Nation Branding, which was set up in January 2009, have focused on reducing the gap and preventing the firms from receiving unfair treatment just because they are from South Korea.

Yoo said one reason for the lack of a broader knowledge of Korea is that even though the country has succeeded in building a strong industrial base and many successful global brands, it has failed to communicate with the world properly. “Most of all, we should improve the country’s infrastructure for overseas PR activities”, he said. “We should also improve the quality of information provided to the world as Korea is no longer a small, weak Asian country. The fact that it successfully hosted the latest G20 meeting has changed the way the world sees it”.

The professor called for the need to reinforce the functions of the branding council to ensure more effective overseas promotion. The panel is tasked to reorganize Korea’s existing overseas PR activities and create a better image abroad for Korean culture and products. Some of its key projects include expanding exchange programs with underdeveloped countries in line with Seoul’s plan to increase development aid, developing programs for multicultural families here, strengthening the education of globally accepted norms and etiquette among citizens, and globalizing Korean food and language.

According to Yoo, the country’s economy has grown rapidly in recent decades, but its global contributions are not commensurate with its economic power. Korea’s hardware has grown quickly, but its software development has been too slow in comparison. Improving the country’s global status will be very helpful in closing the gap, and one of the keys to solving the problem is to improve the overall promotion system, he said. “The challenge now facing Korea is to determine how to effectively mold and manage Korea’s brands and reap the benefits for the nation as a whole. That’s the most important role the branding council must implement”, Yoo said.

The branding council’s head Lee Bae-yong, former president of Ewha Woman’s University, has focused on advancing Korea’s nation-branding policies aimed at promoting the country’s culture and history worldwide since her inauguration last October. She said Korea’s rich cultural heritage is largely unknown worldwide despite its economic achievements, making it difficult to achieve the desired results from its recent vigorous overseas promotional activities.
“Our culture and history can be effective tools in communicating with the rest of the world”, the history professor said in a recent interview with The Korea Times.

“Economic development is an integral part in improving a country’s image and reputation. However, what really matters to make Korea a respected nation is culture and education. We need to strengthen cultural exchanges to make foreigners better understand us“.

Yoo proposed the council encompass not only culture and economy, but also other sectors, such as politics, diplomacy and social events, to provide comprehensive information on Korea. In doing so, the government should put priority on meeting the needs of foreigners, rather than trying to “satisfy its needs”, he pointed out.

“The importance of the council transcends the interests of any political parties and ideologies. I hope it will develop into the No.1 source of information on this country for the rest of the world”, said the professor.

The reputation of a country has a direct impact on almost every way it engages with the rest of the world: Its products, politics, people, culture as well as its ability to attract foreign tourists and investment. All are underpinned by its international image. If a country’s image is weak, incorrect, or negative, there is no doubt that the problem will seriously obstruct much of the ambition that the country has while interacting with the rest of the world.

In that sense, Korea’s successful hosting of the G20 summit, the world’s premier economic forum, last year was a historic and impressive feat that raised the country’s international reputation, according to Yoo Jae-woong, professor of Eulji University.

Analysts say the Seoul summit symbolizes the country’s elevation to a leadership position in the new international order. During the two-day event, the world watched every word it said and every action it took. Hosting the summit was a great responsibility entrusted to the nation. The Korea International Trade Association said the economic effect of the G20 summit on the Korean economy surpasses 31 trillion won ($28 billion).

The direct economic impact of the summit reached 266.7 billion won, including 96.9 billion won from visitors, who spent an average of $3,000 each during the event. The meeting also had overseas promotion effects that were the equivalent of running 169.8 billion won worth of advertisements.

“The summit has had a positive impact not only on our economy, but on all aspects of our society, including political, social and cultural sectors”, the association said in a press release. “Its publicity effect was four times larger than that of the FIFA World Cup”.

But more important than the economic benefits is the heightened self-esteem of the Korean people and the higher prestige of the country. “The G20 summit provided a crucial opportunity for Korea to become a more beloved and respected nation in the world”, Yoo said. “From now on, we need to focus on reshaping our overseas promotional activities to capitalize on the successful hosting of the G20 and help it join the ranks of advanced countries”.