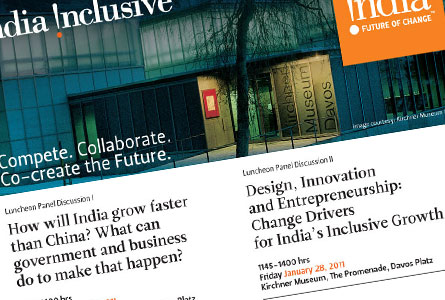 India’s promotional initiative Future of Change will be hosting at Davos during the World Economic Forum two, sort-of, nation-branding events.

On Thursday, January 27, India Future of Change will host an all-star ensemble of business leaders, policy makers and academicians; moderated by Martin Wolf of the Financial Times, the panel will discuss how India can surpass China in economic growth. On Friday January 28, a second panel discussion will assemble, featuring domain experts from innovation and design and India Inc. This panel will discuss how the synergy between design and innovation can be a catalyst for India’s inclusive growth.

“The business panel is meant to do a bit of corporate diplomacy to project and discuss the business realities of a new India and where it fits into the global marketplace.  The design and innovation panel is a way to create a dialogue with the creative classes about India and how design and innovation play a role in the 21st century India”, a representative told Nation-Branding.info.

“The events are part of the India’s Future of Change initiative that looks at creating an awareness amongst audiences worldwide about the emergent reality of India rather than use the existing stereotypes of India.  The overall initiative is an exercise in nation branding and public diplomacy, promoting India through its culture, diversity and democracy, as well as through its innovation and entrepreneurship”, the representative added.

The panels are slated to be globally telecast on Bloomberg TV. And if you’ve got questions for the panelists, the organizers are collecting them via twitter so you can send them straight to their twitter account (@futureofchange).