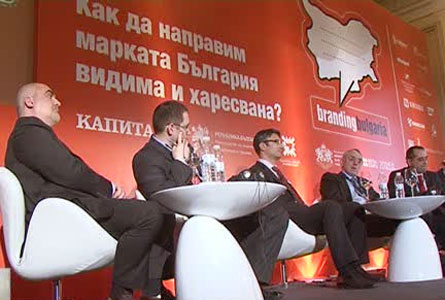 Bulgaria is one of those countries that emerged to the world after the fall of the Iron Curtain, but that hasn’t made itself an identifiable image yet. The country is now thinking about what’s Bulgaria image now, how it has changed since 1989 and how the country can prompt it to go to the desired direction. To discuss these issues, a Branding Bulgaria conference was held yesterday, March 1st, in Sofia. Tanya Harizanova is behind the story.

How to make the image of Bulgaria more popular and easily recognizable? This was the topic of a conference that raised issues such as: what exactly is the image of a country, why is it important and how to change it if we do not like it. “If you want to build a good image and reputation of Bulgaria, you need to set yourself specific goals”, said at the conference Simon Anholt, advisor of several cabinets and a leading expert on the problems of national reputation and identity.

The modern world is a market and each country, city, or region competes for its share of world consumers, tourists, investors, sports and cultural events. In this fierce competition, more and more people do not have enough time to read about new places and get a preliminary idea. That is why most often they trust clichés. And the most popular clichés describe Bulgaria as a country in Eastern Europe and a EU member with cheap seaside resorts, and… that’s all.

How can we change the image of Bulgaria? Bulgaria’s Minister of Economy and Energy, Traycho Traykov, told Radio Bulgaria more: “In order to change something, we need to constantly send messages to the world the country deserves the image that it claims to have”. “Inside the overall brand of Bulgaria, we have specific products that we want to sell, for example tourism in Bulgaria. There you can work in a much more focused way. Bulgaria is one of the richest countries in the world in terms of cultural heritage and we just need to advertise ourselves more. This does not necessarily mean that we need to entirely change the country’s image. In improving Bulgaria’s image as an investment destination, it is good to work with specific recipients of our promotional message”, Minister Traykov stated.

In order to achieve a good reputation, Bulgaria should not simply invest millions in advertising, but it should strive at achieving things that will be beneficial to people around the world. This is the opinion of Simon Anholt who regards this idea as a completely feasible prospect: ??“The question is what Bulgaria’s logo tells about your country, what message it sends to people around the world”, says Simon Anholt and is quick to offer expert advice.

“You need a strategy for the next 50 years. Building a positive image takes decades, but ruining a positive image is really hard. For example, the turmoil in Egypt is not going to change the country’s image as people are simply not willing to change their cliché idea of this country. In order to improve Bulgaria’s reputation, we need actions that relate to people around the globe. These actions will make people think well of your country. This is a true example of policy and not an artificial PR campaign. A logo alone or a promotional phrase is not enough to change the perception of a country. On the other hand, world news related to Bulgaria are of much higher importance as they will attract the attention of everyone to you”, branding expert Simon Anholt says.

According to Minister Traykov, branding Bulgaria around the world as a tourist and investment destination has a huge potential.
“Having a good image is like a love relationship – you need to like yourself first in order to make others like you. For example, Bulgarian yoghurt in Japan has a 40-percent share on the market because people there think that Bulgaria is a beautiful country where people lead healthy and long lives. And it will be really difficult to change this sustainable image of Bulgaria and of the specific product.”

Traykov thinks that this approach needs to continue, and we should continue profiting from the sustainable perceptions of Japanese people about Bulgarian yoghurt and those of Russians about good-quality Bulgarian canned food.

As far as the country’s economy is concerned, things there are pretty clear. “We have a favorable business environment in which the government does not act as an impediment and costs are cheap. The world needs to learn about these attractive conditions that we offer, that is why the money spent on the country’s branding is money well spent”, concludes Traykov.