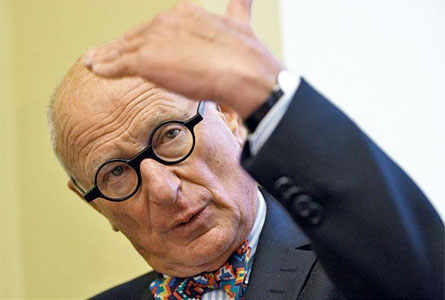 In the last weeks we’ve tracked Wally Olins (not Wolff Olins as some say) involvement with Poland. We published a video about Wally Olins on Brand Poland, and the following week we published the entire speech (Wally Olins’ keynote speech in Poland). Now here’s an article written by Wally Olins himself on Poland’s nation branding.

Poland should grab the bull by the horns as Spain

There is probably no country which has more than Poland needs to demonstrate its identity – itself and its neighbors. Not only changed the Polish border, but with a multicultural country it has become generally ethnically homogeneous. Poland is finally in line with those of its neighbors, with whom so long led the violent disputes. Above all, today is a democratic country. People in the West often do not realize that the Republic is a large and important country and that its accession to the European Union will shift the center of gravity in Europe to the east. When that happens, Poland will take almost a key position in Europe. But first you must build its brand.

On the Middle East, or anywhere

As I write this, in late 2003, most Europeans from the West is unable to distinguish between the countries acceding to the European Union. They do not know which country is big, and that small, which highly industrialized, and a farm, have difficulty in providing any data on these countries, and even the mention of the most unique cities or tourist attractions. Poland, along with most of the countries of Central and Eastern Europe is seen as a gray, seamless, mass.

Significantly, in a similar situation, Spain was still a generation ago. Before the death of General Franco (in 1975), Spain was seen as a place for cheap holidays and wine country – affected by poverty, there is nothing substantial in terms of cultural or commercial, with the authoritarian leader. In the period preceding the accession to the European Union (in 1986) and later the Spanish reality has changed. Spain can boast of several major international companies such as Repsol and Telefonica, well-known politicians such as José Maria Aznar, and Javier Solana, as well as people of culture, such as Pedro Almodóvar and Santiago Calatrava. Spain also took a hit to the world of fashion brands such as Zara, Mango and Alfredo Dominguez. There are few areas where this country would have no leaders. All this happened within about 25 years. Poland should grab the bull by the horns as Spain.

Poland has terrific potential – a beautiful city like Wroclaw and Krakow, first-class tourist attractions (for example, the Mazury Lake District and Poland), the traditions of theater, film and music making. Has the potential to create global companies. Above all, however, resides in its 40 million people able to stand out in Europe.

The weakness of Polish, which has repeatedly proven history, however, is that Poles have difficulty with the action in the name of a common goal. To see this, just to mention the collapse of the Polish Kingdom in the eighteenth century. Here I must add that working with Polish organizations generally frustrating sometimes because of this trait and futile and unnecessary – I think – skirmishing. This is a weakness that Poles must overcome if they want to fully exploit its potential. Added to this is still a kind of lack of confidence, a feeling that Poland and Polish products will not be able to face global competition. From my observation is that the best Polish companies and the best Polish managers are just as good as world class. As for Polish creativity (creativity) – fully meets the highest international standards.

If Poland will put effort and energy in promoting his country, tourism, commercial ventures and creative achievements, over the next 10-15 years will become so influential today as Spain. If you behave differently, its image will be standing out from the changing reality. This will be reflected negatively on foreign investments, export of branded goods and tourism, and respect for the achievements of the political, cultural and sports activities will be scaled down. Respect for myself.