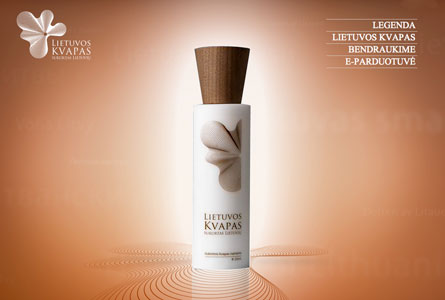 We’ve reported about Lithuania’s nation branding issues before. Some proposed the idea of changing Lithuania’s country name back in 2008, London-based Saffron Consultants were hired to develop a strategy for Lithuania’s brand in 2009, and we reported on how that strategy turned into video in 2010. Still today, Lithuania seems to be looking for new national symbols that help re-cast it internationally. Even the flag has been sometimes discussed, as some say it looks ‘Jamaican’ and could be confused with a rastafari flag.

In January 2011, Lithuania launched yet another nation branding effort – a perfume, no less. As a pioneer in the country branding area, Lithuania created a different national symbol – “a symbol that shows the world the character of the country through a bottle of perfume”, the marketing experts behind the initiative say. Evoke musk, moss and you’re halfway to the ‘Smell of Lithuania’, which has already reached the nostrils of international ambassadors and soldiers in Afghanistan. Tourists are next to be sprayed, Berthold Forssman writes on CafeBabel.

Something’s in the air in Lithuania. The special waft which goes by the name of Lietuvos kvapas (‘Lithuanian perfume’) is a heady mix of musk, sandalwood, cedar and other similarly exotic ingredients. It’s with this fragrance that the southernmost Baltic country wants to conquer the world.

At first glance the white bottle with the brown lid looks just like any other perfume bottle. But the product’s manufacturers say it’s more than just a scent: this is a national symbol. ‘Lietuvos kvapas is right up there with symbols such as the Lithuanian coat of arms, flag or national hymn’, gushes marketing expert Mindaugas Stongvilas, who came up with the initial concept. ‘You can see, hear and hold those things, but you can’t smell them. Lietuvos kvapas will access a far more important sense of people.’

The nation of 3.2 million want to market the perfume globally. Stongvilas believes that national symbols up until now have little suited. ‘The colours of the Lithuanian tricolor are a quite unremarkable yellow, green and red, other countries have similar flags. The armour-clad knight on horseback in our coat of arms reflects a Europe of former times, and doesn’t help either in differentiating Lithuania from other countries. The composer of our national hymn was no composer or musician, but a doctor and poet! As a consequence our hymn just sounds like others,’ he rails.

Stongvilas and co. came up with the idea of creating something truly new during the preparations of Lithuania’s thousand-year anniversary in the summer of 2009. ‘Lithuania has an image problem,’ he explains. ‘We’ve always been on the lookout for a new identification symbol, but haven’t managed thus far. That’s when a few colleagues and I decided to come up with a scent, it was impossible not to follow it through.’

But the perfume has not yet been Made in Lithuania. The first thousand bottles were manufactured in the traditionally famous perfume capital of Grasse in southern France, to fulfil the Lithuanians’ olfactory wishes.

In particular, the creators wanted a smell akin to fire, moss and wild plants. ‘It reminds us of our old pagan rituals,’ says Stongvilas. He brushes aside the fact that the majority of the ingredients of this national perfume don’t actually come from Lithuania.

‘We’ve been guided by emotional and symbolic values. For example sandalwood is associated with India and the ensuing Indo-European language, which the Lithuanians have always been ancient representatives of. Cedar symbolises constancy and musk stands for confidence, qualities which have never lacked in our population.’

The comical idea has had some resonance. The foreign ministry in Vilnius has sent fragrance samples to all of its Lithuanian embassies, stretching even to a perfumed kiss to their soldiers in Afghanistan. They’re also stocked in hotels and airports, whose guests and passengers have had the pleasant surprise of catching a whiff of Lithuania immediately upon entering their rooms or halls.

The project was financed entirely by private funds. The perfume developing and the production of a first charge of 1,000 bottles was close to Euro 30,000.