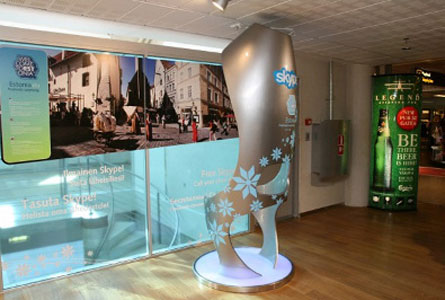 Back in 2009, we used Estonia and Skype as an example of how a nation brand can be strengthened through the country’s commercial brands (for a longer disquisition check out our Nation branding and national brands: Making the most of them piece).

Now it seems that Estonia is honouring these recommendations as the Estonian promotion agency Enterprise Estonia has recently launched the world’s first Skype ‘video telephony booth’.

The booth has been unveiled at Tallinn Airport in Estonia, enabling travellers to make free worldwide video calls to other Skype users. The Estonian promoting agency’s aim is “to showcase Estonia’s high-tech capabilities”, according to the agency.

Skype was launched by three Estonian software developers in 2003 and has been one of the most popular online telephone applications, with an estimated 663 million registered users by the end of 2010.

The booth’s nation branding ambitions are evident. “We wanted to introduce Estonia foremost as a smart e-solution country – small but innovative – which led to the logical idea to make a Skype phone booth,” Enterprise Estonia communications coordinator Merilin Pärli said.

“Skype was an idea that was developed in Estonia, and the company still has a development unit in Tallinn, so it was quite logical that the initial home of Skype would have a Skype station at Tallinn airport – as one Skype station says more than 1,000 words about Estonia”, she added.

Pärli recalled that Tallinn Airport is named after the former Estonian president Lennart Meri, who never missed a chance to say that the country must seek its own brand. “And if Skype isn’t one, then what is?” asked Pärli, adding that hopefully in the future such phone booths will be found in airports across the world.