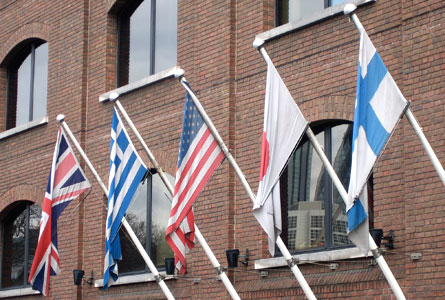 Forget about fancy country logos. Flags are the real logo of a country. They mark everything from that country, they evoke ideas, they enshrine feelings and thoughts – love and hatred, envy and pride. No country logo attains that.

The country flag is the quintessential form of nation brand identity.  It takes everything about a people, their culture, their beliefs, their value systems, etc and wraps it up into a rectangular cloth. At face value, that small rectangle is nothing but a grouping of colors and shapes, but we all know that in reality it is a representation of something intangible and it’s almost sacred.

Yes, sacred. So the next time you find yourself questioning the importance of flags and symbols in nation branding, imagine replacing your country’s flag with one from another country and feel your guts’ reaction.

There’s a lot of talk in nation branding about countries now behaving like companies and adopting logos and other branding techniques. It’s all rubbish. Countries had flags, symbols and used distinctive color palettes long before ‘corporate identity’ was invented for companies. The ‘Lambda’ of the Spartans was the logo of the Spartan city-state, as the double-headed eagle was the logo of the Byzantine Roman Empire long before Nike or Vodafone.

Flags are not only a country’s real logo, but as it happens in the corporate world, the colors of the flag have usually been offset onto a plethora of things, from sport teams’ uniforms to airways carrier colors, from national cuisine restaurants to car plates, from TV broadcasting networks to local road signs.

But, unlike logos, flags are not as varied as in the corporate world. For historical reasons, the colors and shapes of national flags are more limited than it appears – and on occasions even two countries may have virtually identical flags, as it occurs with Romania, Chad and Andorra, which happen to have the same flag design.

Additionally, it’s also curious that many countries sharing a common geography, history or ethnic background usually have these similarities portrayed in their flags. For instance, all Scandinavian countries have an irregular cross design on them.

Many Black African countries, on their part, have a combination of red, green and yellow – colors claimed to signal African landscapes. 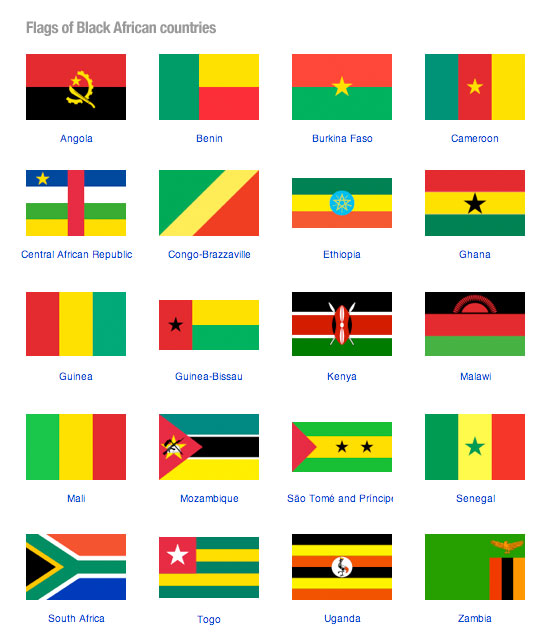 On their part, most Slavic countries in Eastern Europe have a combination of blue, white and red, 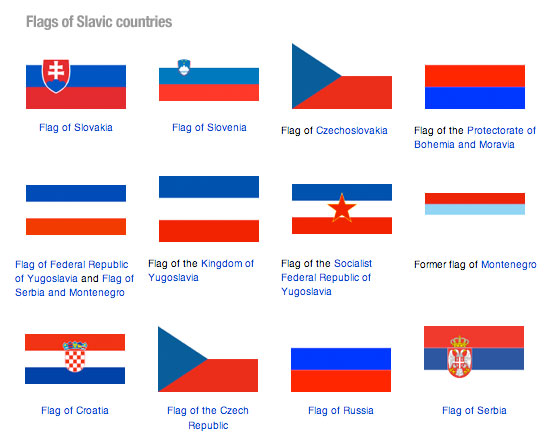 while many Arab countries in the Middle East combine green, red and white in their flags. The many similar Arab flags, in various combinations, all go back to the flag of the Arab Revolt against Ottoman rule. 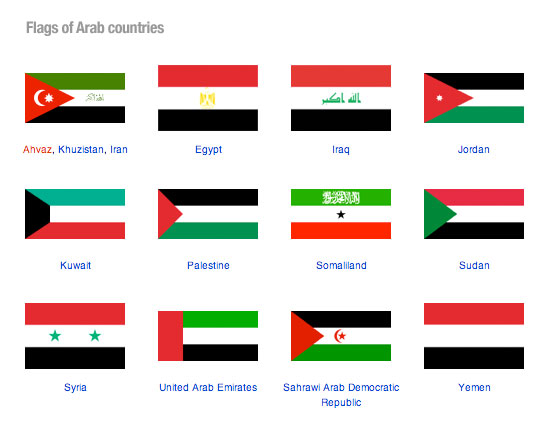 Finally, many countries once belonging to the British Commonwealth had a Union Jack on their flags, but some of them have succesively removed it as it was understood to be a colonial symbol of oppression, but have kept a representation of the Southern Cross constellation.

Some former Spanish colonies in South and Central America, after gaining independence from the colonial power, adopted strikingly similar flags:

Other countries in South America also share a common color and shape scheme. The similarity between the flags of Venezuela, Colombia, and Ecuador derives from their having all been parts of the short-lived Gran Colombia and adopting variations of its flag:

Because similar flags represent similar countries, on many occasions colours and shapes on national flags bring obvious clues about a country’s identity or geography. They often serve as a shortcut to understand a country’s nature. Just like a logo would, branding experts would say.

As a consequence, vexillologists and nation-branders now know that many flags bring a clue about its weather, its people, its geography, its history – in short, they position a country. They ‘brand’ the country they represent.

The flag of Switzerland

National flags are powerful in significance as they represent a set of attributes and values associated with the nation, but they also have a role in spheres less romantic. As in the more prosaic world of commerce.

The flag of Switzerland is a fine example of this. The flag, which consists of a red background with a white Greek cross (a bold, equilateral cross) in the centre, has been widely used to mark Swiss produces, especially premimum goods.

Because Switzerland is perceived to be a country where its inhabitants enjoy great economic wealth and a great quality of life, Swiss-branded goods are also regarded as expensive and high quality.

Some companies have smartly used these associations for their own benefit, as in the cutlery industry, where companies have used the Swiss flag so extensively in their corporate identity that they end up having almost the same logo, as happens with Victorinox and Wenger. These companies are both famous manufacturers of Swiss Army knives and the sole purveyors of these knives to the Swiss army. Their emblems are based on the Swiss coat of arms and their corporate logos and image are so similar that it’s tough to tell them apart.

It might be one of the few exceptional cases where two companies competing in the same market niche have almost equal logos and none of them would ever think about changing it to differantiate itself. It’s also an evidence of the tremendous power of national flags in the commercial world.

In reality, the use of the Swiss flag or coat of arms on merchandise is technically prohibited by the 1931 Federal Act for the protection of public coats of arms and other public insignia, but the prohibition is not enforced and the flag is often used as a design element on many products from Swiss companies. 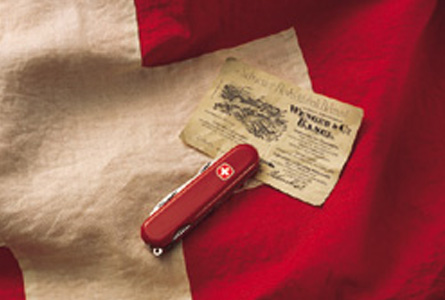 But the Swiss flag is unique in that it is also associated with international diplomacy, as Switzerland is known for its long-standing neutrality. Swiss cities such as Lausanne, Zurich and Geneva host a plethora of international commissions, committees and bodies. As consequence, Switzerland has become something of a neutral pitch for negotations of all kinds and the Swiss flag as an international symbol of peace and understanding.

Switzerland is so strongly associated with international understanding, human welfare and global aid that even the symbol of the Red Cross is based on the flag of Switzerland by reversing of the colours of that flag. The design was chosen in 1864 in order to honor the Helvetic confederation’s valuable contribution as the organization’s homeland.

As we see, flags are not only drapes. Besides the emotional charge enshrined in them, flags are primary nation branding symbols more than any “designed” country logo is. One can safely say that the national flag is the real logo of a country.

Flags have such a representative role that countries have changed it when they needed it to suit the contemporary zeitgeist of the nation. In early 2011, the new country bynamed ‘Southern Sudan’ deprecated the old ‘united’ Sudanese flag, which had Arab and Muslim leanings in its colors and designs (see above), and replaced it for a new flag more appropiate for a country where 80% of the population is neither Arab nor Muslim, but black and either Catholic or animist.

The new flag of Southern Sudan is very ‘Black African’ in style and color palette. In fact, it’s very similar to the flag of neighbouring Kenya with the addition of a blue triangle and gold star at the hoist.

“The flag, the provisional government of Southern Sudan claims, signifies one nation of black Africans united in the struggle to perpetuate peace and prosperity for all the people of Southern Sudan”. The new country’s anthem, The Land of Cush, is also Christian in nature, as it is a reference to the Old Testament’s inhabitants of the ancient African Kingdom of Kush whose people had a markedly different skin colour from the Israelites.

Spain, for instance, is another country that changed its official flag in 1931 to communicate that the country had renewed itself by turning into a Republic instead of a Kingdom.

Later on, in 1965, Canada also changed its national flag in order to help visualize that the country was re-affirming itself as a fully independent country and dropping its past as a former British colony. For this reason, the new flag dropped the Imperial Union Jack and adopted a uniquely Canadian symbol – the maple leaf (which had been a traditional symbol of French-speaking Canadians).

More recently, other countries have contemplated changing their flag in order to “re-brand” themselves to the eyes within and abroad. A debate on Slovenia’s flag (and name) change is still persistent, as some Slovenes believe the country flag to be not Slovenian at all (it has no ‘Slovenian green’ in it) and not distinctive enough either since it’s so similar to other Slavic countries (see above).

Estonia is another most significative case. This small country by the Baltic Sea considered changing its flag to make it more similar to the Scandinavian ones to help visualize that it was more “Nordic” and “Scandinavian” than Baltic in its nature and identity. By removing the three bands and use instead a Scandinavian-styled cross, the country expected to convey another positionment to the world. The initiative was never applied, but it still is a recurrent discussion in the country.

The debate on changing Estonia’s flag emerged in 2001 after an Estonian politician, Kaarel Tarand, suggested that the flag should be changed from a tricolour to a Scandinavian-styled cross design, keeping the same white, black and blue colours. Tarand’s supporters claimed that a tricolour gives Estonia the image of a post-Soviet or Eastern European country (think of Latvia, Lithuania, Armenia, Romania, Croatia and Russia for former Soviet tricoleurs, even if Italy, France or Germany also have tricolour flags), while a Scandinavian-styled cross design would symbolise the country’s links with Nordic countries, especially with Finland, with whom Estonians share a common language family.

The example of Estonia, like the Spanish and Canadian experiences, shows that flags have a gigantic symbolic power. If Estonia changed its flag, by gross association and natural simplification people would probably begin positioning Estonia as another Scandinavian country, and Estonia’s nation brand would probably gain from it. For some years it may be ridiculed as a Scandinavian-wannabe country, but over the years the visual power of the flag would convey Estonia’s aspired Nordic identity and eventually project the country as fully Nordic.

By the way, there’s a worth-reading speech by the then Estonian Minister of Foreign Affairs, Toomas Hendrik Ilves, about Estonia’s identity as a Nordic country here.

But Estonia is not the only country to have debated about a new nation flag with Scandinavian leanings.

During the preparation of the new constitution for West Germany after the Second World War, discussions regarding its national symbols took place. Although there were objections to the creation of a national flag before reunification with the East, it was decided to proceed, and designs for the new flag were evaluated.

The final choice was between two designs, both using black-red-gold. The Social Democrats proposed the re-introduction of the old Weimar tricolour flag, while the conservative parties proposed a variant of the Scandinavian-styled, 1944 flag designed by agents of the German anti-Hitler Resistance movement. The tricolour was eventually selected, largely to illustrate the continuity between the Weimar Republic and this new German state.

It wouldn’t be strange, had the other design be elected, to think today of Germany as a “Nordic” or “Baltic” country, an idea we now would reject as unnatural. We have digested that Germany is a Central European power, at the heart of Mitteleuropa. But Germany has landborder with the “Nordic” Denmark, and has its North-Eastern shores bathed by the Baltic Sea. It would only need to have a Scandinavian-styled flag to prompt onlookers to think of it more Northern than it really is.

Symbols drive perceptions, and as a lazy kind of living systems, we humans tend to put similar-looking things in the same group. A Scandinavian-styled flag would have made Germany more Nordic, not in geography of course but in the mental map of many people. We would probably think of Germany differently now had this other flag been approved.