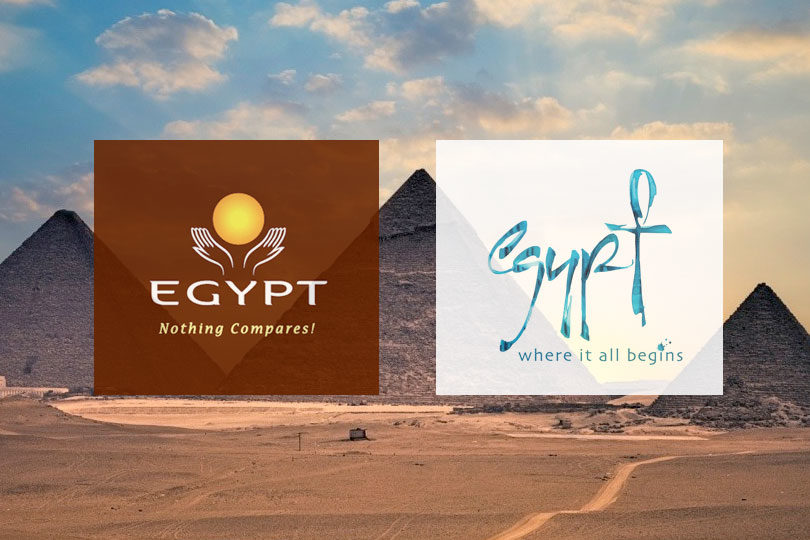 Siegel+Gale reflects on Egypt’s recent change of logo in a new article published on their blog. For once,  I don’t agree with them. I loved the old Egypt logo – it was mystical, solar, serene, magic. And it featured colors we associate with Egypt. The new logo looks like a cheap watercolor painting.  And it’s not even very readable… Here’s the story anyway:

Much like the marketing departments of travel brands such as airlines and resorts and hotels, departments of tourism and their marketing partners are responsible for developing and promoting the brands of some of the world’s most visited countries.

Although challenging, country branding has always been a fascinating exercise to me. It requires deep understanding of a country’s assets and liabilities, its positive and negative impressions, and its history and future vision. Condensing all of these into a global brand that’s intriguing and inviting to tourists, investors, foreign governments, as well as a country’s own citizens requires both understanding of and appreciation for a nation’s distinct culture and heritage.

“Nothing Compares to Egypt”

For years, the incarnation of “brand Egypt” has been captured in an image of two cupped hands holding a vermilion sun, with the tagline “Nothing Compares.” But, the brand campaign never truly reflected my own impressions of what an Egyptian experience would be. It didn’t seem to reach high enough or far enough into present day to reflect the essence of what the country has to offer. It focused on the base impressions of the country—pharaohs, pyramids, and the Nile, as well as the national cult of the sun and its relevance to Egyptian tourism. The “Nothing Compares” brand video emphasized sunny beaches, sun-ripened fruit, and romantic sunsets, yet seemed to deny its own people something to be proud of beyond the weather, geographic features and monuments.

Perhaps nothing really does compare to Egypt, but this was not fully expressed by the “Nothing Compares” identity and brand campaign. To me, the country’s spirit was not distilled in a meaningful way—which is why I was thrilled to hear of Egypt’s recent rebranding.

“Where it All Begins”

The new identity encapsulates the idea “Where It All Begins,” and is marked by more ethereal and graceful images and visualizations than “Nothing Compares.” While “Nothing Compares” focused on Egypt’s historical allure for tourists, “Where It All Begins” goes beyond that to emphasize the significance of the country’s current cultural contributions, as well as highlighting its place in history. What’s more is that it doesn’t just refer to any point in time, but suggests Egypt is the starting point of all time. It’s a more intriguing expression—providing a deeper draw to the country, and engendering pride among Egyptian nationals.

Comparing the videos from both rebrands reveals some consistencies, such as the use of light, the captivating music and the focus on ancient statues. But, “Where It All Begins” truly seems to capture the immensity of the country which creates a greater sense of wonder and awe.

For those of you have visited Egypt, does “Where It All Begins” represent a clearer and truer embodiment of your experience? For those who haven’t visited, which concept best embodies your impression of the country? Or better yet, which compels you to visit?