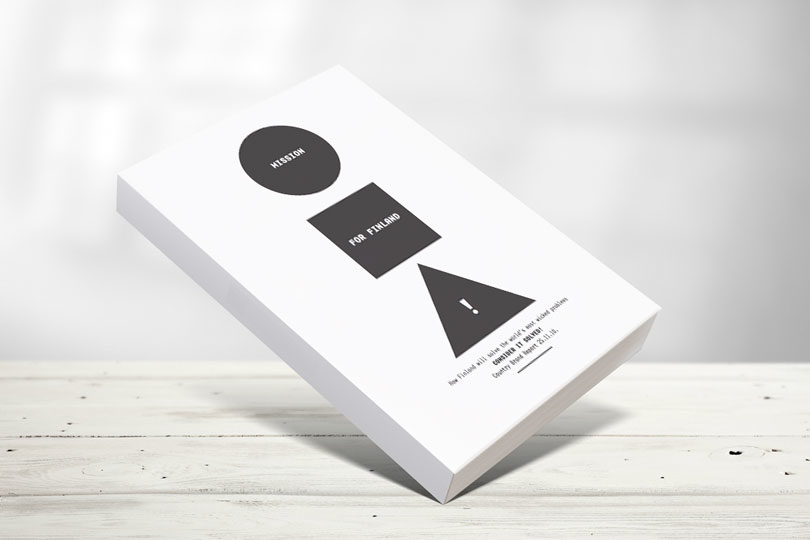 In 2030, Finland will be the world’s problem-solver, the report of the Country Brand Delegation states in its final report. “Our practical and forthright approach to dealing with challenges offers the country an excellent opportunity to earn distinction, for instance, in resolving problems associated with international conflicts, water shortage and education” – so says a press release issued by the Finnish Ministry for Foreign Affairs.

The Country Brand Delegation appointed by Minister for Foreign Affairs Alexander Stubb in 2008 was charged with the task of creating a strategy for Finland that would convince the world to turn to us more often and more effectively. The delegation’s report, Mission for Finland, was launched at Torpparinmäki Comprehensive School in Helsinki.

In addition to solution orientation, the delegation defines three central areas that can be used to strengthen the image of Finland. These three areas are functionality, nature and education.

According to the group, Finland’s strengths lie in its negotiation skills, its ability to offer clean water and food, as well as good education and good teachers. They say that Finns differ from other peoples in having a certain solution-centred approach in their actions. “I am certain that we Finns have strengths in precisely those areas where they are needed just now,” Stubb commented.

”The image of Finland must be based on real, existing strengths. Only by developing our strengthens in a creative way can we increase Finland’s familiarity and appeal to the rest of the world. To my mind, the delegation has succeeded admirably in this creative thought process,” said Jorma Ollila, Chairman of the Country Brand Delegation.

He also stressed that the delegation cannot build a country brand for Finland; it can only suggest measures reinforcing Finland’s international competitive edge. “The image of Finland isn’t developed by campaigns, but by real deeds. By helping to make a better world we also make Finland a better place to live and work.”

Is there a Finn on board?

Many films feature a scene where a passenger on an aircraft is suddenly taken ill. At the critical moment, people start looking for someone who could help. The voice of a crew member comes over the loudspeaker: “Is there a doctor on board?”

It is easy to compare the present-day world to a long-haul flight. Problems are shared, as those on board have only one another to depend on. When a crisis strikes, each individual has a duty to help everyone else.

Every problem is also an opportunity. For Finland, problems offer a unique opportunity to raise the country’s international profile and to promote global awareness of Finland as a problem-solver. The group believes that Finland’s greatest strength is the unbiased, solution-focused approach to problems, which derives from Finnish history and culture. When faced with an impossible situation, Finns roll up their sleeves and double their efforts, te group argues.

Of course, a small country cannot expect to solve everything. Finland should rather focus on the areas in which we have a proven track record – functionality, nature and education – and find a way to solve global problems in these areas in the best way in the world. As for functionality, Finland offers the world functionality and sustainable solutions in the form of products and services as well as a functional society, as well its ability to negotiate so that as many people as possible can have the opportunity to lead good, safe lives. On the nature front, Finland for instance offers the world clean water and related expertise. Finally, in education Finland offers the world better education, better teachers and education-related expertise.

This way Finland will help the world as well as itself. And the world will learn, when faced with a problem, to ask: “Is there a Finn on board?”

In its report the delegation lists more than one hundred concrete missions. Some of them are targeted at the authorities, some at business and organizations, and still others at ordinary Finns. The delegation proposes, for instance, that organic production should account for at least one half of Finland’s overall agricultural production by the year 2030, that Finland’s lake water should be purified and made drinkable, and that Finland should establish a peace mediation convention dedicated to Nobel laureate Martti Ahtisaari. The measures targeted at citizens are listed on the website www.tehtavasuomelle.fi.

Delegation chairman Jorma Ollila distributed three missions at the launch of the report. Foreign Minister Stubb accepted the mission of establishing a peace mediation convention dedicated to Martti Ahtisaari and the mission of a Finnish Water Forum for the purification of lakes. The third mission is linked with well-being at schools: Do something together even with the quietest ones in the class. The ninth-form pupils at Torpparinmäki Comprehensive School accepted this mission on behalf of all Finnish school children.

“The delegation report presents a thorough analysis of the Finnish identity. Even more important than analysis, however, is to swing into action. The real country brand work starts now,” Alexander Stubb stated.