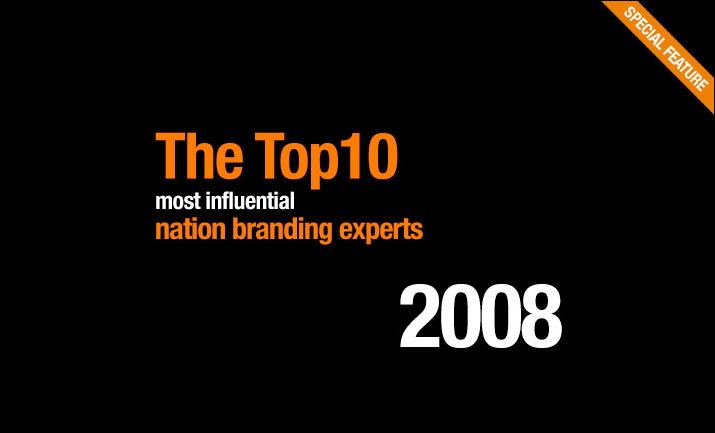 By definition, all emerging industries are very creative but also very chaotic, and it is hard to find the trend-setting individuals among the booming chaos. But at Nation-Branding we thought it would be interesting to end the 2008 year with a special feature with some names to a field which is not only rising, but is also somewhat surrounded by secrecy. What follows here is a list with the top ten most influential nation branding experts in 2008 according to Nation-Branding.info:

SIMON ANHOLT
Simon Anholt is normally considered as the leading figure in the place branding industry. He edits edits the Place Branding and Public Diplomacy journals, and is the visible head of the Anholt Nation Brands Index, a survey which provides rankings by brand value of several countries. A member of the British government’s Public Diplomacy Board, Anholt is somewhat special in the place branding field, because his approach focuses on policy-making rather than marketing and communications. He has worked as an advisor to 22 governments.

WALLY OLINS
Wally Olins is generally recognised to be the world’s most experienced practitioner of corporate identity and branding. On the place branding sphere, he has worked for a number of cities and countries including London, Mauritius, Northern Ireland, Poland, Portugal (the Portuguese Tourist Board) and Vietnam. He is now Chairman of Saffron Brand Consultants, with offices in London, Madrid, Mumbai and New York.

FIONA GILMORE
Fiona Gilmore is one of the leading experts and authors on brands and branding. She co-founded Springpoint, a global brands and corporate identity consultancy, with its headquarters in London. In 2003 she founded the country-branding consultancy Acanchi and has worked in initiatives with the authorities in the Dominican Republic, Lebanon, Zambia, Bahrain, the Isle of Man, Lebanon, Mauritius, Wales, Northern Ireland, Belfast, Britain, Hong Kong, and the Blue Mountains of Australia.

RINA PLAPLER
Rina Plapler, who has a BA from McGill University and holds two master’s degrees from Harvard University, is a senior executive director at FutureBrand. She is most known for being in charge of the Country Brands Index, which is released annually by FutureBrand together with Weber Shandwick. A specialist in destination branding and country brands, she is a frequent speaker on these topics and has been featured and interviewed as an expert on place branding in many papers across the world.

CREENAGH LODGE
Creenagh Lodge of the Corporate Edge agency is one of the UK’s leading authorities on corporate and nation branding. She has studied how countries including New Zealand, Canada and Scotland have created national branding strategies to drive the long-term improvement of their export, tourism and inward investment. She is based in the UK and has been involved in the development of 18 country and regional brands.

NICHOLAS PAPADOPOULOS
Nicholas Papadopoulos is a professor of marketing and international business at the Sprott School of Business, Carleton University, Canada. He has authored, co-authored or edited over 160 publications, is a member of ?ve journal Editorial Boards, and is listed in Who’s Who in Canadian Business. His interests focus on international marketing strategy, international marketing selection, and place equity and the country of origin effect.

KEITH DINNIE
Dr Keith Dinnie is Associate Professor of Business at Temple University Japan Campus (TUJ) in Tokyo and the author of the book “Nation Branding: Concepts, Issues, Practice”. He founded Brand Horizons, branding consultancy which provides customised seminars and workshops on a range of nation branding issues including nation branding for tourism, inward investment, public diplomacy, and export promotion. These seminars and workshops are endorsed by the leading Palgrave Macmillan journals “Journal of Brand Management” and “Place Branding and Public Diplomacy”.

PETER VAN HAM
Dr. Peter van Ham is a Dutch political scientist and nation branding expert, Director of the Global Governance Research Programme at the Netherlands Institute of International Relations “Clingendael” in The Hague, and Professor at the College of Europe in Bruges (Belgium). He is a member of the Advisory Council on International Affairs to the Dutch Government (Peace and Security Committee), as well as a member of the editorial boards of Security Dialogue (Sage) and Place Branding (Henry Stewart).

Last and least, and out of the list
Andreas Markessinis is certainly not one of the top ten most influential nation branding experts, but he is the founder of Nation-Branding.info, the internet’s first and only portal specialized on nation branding, with articles, features, blog and discussion on the theories and practices in the field of nation branding. Additionally, he is also the man behind the Branding Greece project, and has published dozens of articles on nation branding, some of them in first-ranking publications. And, above anything else, he is humorous enough to include himself in this list!