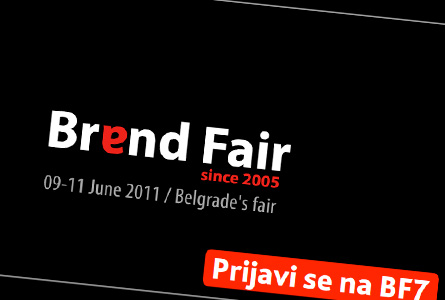 The 7th International Brand Conference “Branding regions and cities – foreign direct investments, export growth and tourism development” is going to be held on 10 June 2011 in Belgrade, Serbia. This year’s edition is particularly interesting to Nation-Branding’s audience since the Fair has a particular focus on place branding.

With the program of highest quality in whose creation are involved globally leading names in branding, Brand Conference has become the largest and the best educating event dedicated to brands and branding in Serbia as well as the whole region of Southeast Europe. The Brand Conference’s list of previous speakers include leading global branding experts such as Simon Anholt, Marc Gobe, Scot Bedbury, Martin Lindstrom, Jose Filipe Torres.

This year the head names of the Brand Conference are Jeremy Hildreth and Simon Middleton.

One of the preeminent practitioners of place branding, Jeremy is the only professional to have worked closely with both ‘founding fathers’ of the discipline: Wally Olins, co-founder of Wolff Olins in the 1960s, and Simon Anholt, with whom Jeremy co-authored the book Brand America (translated into five languages and released in a revised second edition in March 2010).

During his five-year tenure at Saffron, Jeremy travelled all over the world, leading or participating in all place branding projects undertaken by the firm during that period.

For example, as head of place branding at Saffron he led the project team that created the 2008 work for Visit London — the visual and verbal identity which Marketing magazine described as “near perfect.” He is the author, more or less single-handedly, of the Visit London House Style Guide, critical parts of which are now being adapted by the office of the city’s new mayor Boris Johnson to serve the whole of London (a project into which Jeremy has been re-drafted to assist).

Simon Middleton, founder and principal of Brand Strategy Guru, is one of the UK’s most in-demand brand advisors and educator. Simon has worked with blue chip companies and challenger brands including: Aviva, Barclays, British Airways, Etisalat, Pret A Manger, Deloitte, McCann Erickson, Merial, Denplan and All About Weight.

As the specialist in destination branding, he worked with The Broads national park (Britain’s Magical Waterland), as well as Great Yarmouth, Hemsby, Felixstowe, The Earth Trust, Scottish Enterprise and the Slovak Tourist Board.

He is a member of The Institute of Directors, The Chartered Institute of Marketing, and The Association for Place Branding & Public Diplomacy, and is a Fellow of The Royal Society of Arts.

“Brand Conference has the aim to popularize the latest global trends and achievements in the field of branding as a science and as a business practice. Our focus for this year is on place branding as the strategic instrument for attracting the foreign direct investments, export growth and tourism development. One of the special topics of the 7th International Brand Conference is the economic role of the Serbia on the Balkans and potentials of Serbia as the new strategic point of economic cooperation between European Union and Russian Federation. Serbia is having unique special economic relations and agreements with the Russian Federation and Customs Union. It’s the opportunity for development of the new models of cooperation between Russian Federation (Customs Union), Balkans and EU”, Vjekoslav Cerovina, head manager of the Brand Conference, said exclusively to Nation-Branding.Info.